The document Acids - Notes, Chemistry, IAS UPSC Notes | EduRev is a part of the UPSC Course General Science(Prelims) by IRS Divey Sethi.
All you need of UPSC at this link: UPSC

Strength of Acids and Bases

How do Acids and Bases React with Metals How do Acids and Bases React with each other

HOW STRONG ARE ACID OR BASE SOLUTIONS

pH in our digestive system

pH change as the cause of tooth decay

Self defence by animals and plants through chemical warfare 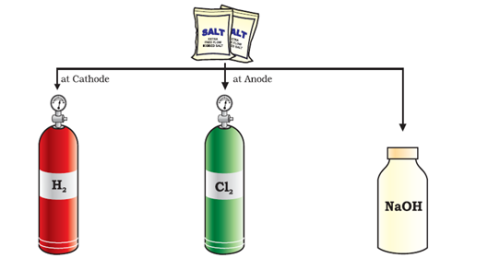 (i) For making baking powder, which is a mixture of baking soda (sodium hydrogencarbonate) and a mild edible acid such as tartaric acid. Carbon dioxide produced during the reaction causes bread or cake to rise making them soft and spongy.

(ii) Sodium hydrogencarbonate is also an ingredient in antacids. Being alkaline, it neutralises excess acid in the stomach and provides relief.

(iii) It is also used in soda-acid fire extinguishers.

(i) Sodium carbonate (washing soda) is used in glass, soap and paper industries.

(ii) It is used in the manufacture of sodium compounds such as borax.

(iii) Sodium carbonate can be used as a cleaning agent for domestic purposes.

(iv) It is used for removing permanent hardness of water