The document Additional Questions Solved - Children at Work Notes | Study English Class 8 - Class 8 is a part of the Class 8 Course English Class 8.
All you need of Class 8 at this link: Class 8

Q1. How old was Velu when he left his home? Why did he leave his home? Ans. Velu was eleven when he ran away from home. He took this risk because he was not happy with his conditions at home.

Q2. What problems did Velu face when he stood on Chennai platform? Ans. Velu was alone, tired and hungry. He felt miserable. For two days, he had eaten nothing except some peanuts. He was penniless and homeless too.

Q3. How did Jaya earn her livelihood? Ans. Jaya was a small girl who lived in a cottage near a dirty drain. She was a ragpicker. She earned her livelihood by collecting paper, plastic, glass and even food from the dustbins and heaps of rubbish.

Q4. What sort of a girl was Jaya? How did she help Velu? Ans. Jaya was a poor little girl, ragpicker who carried a bag on her back. She collected waste materials from the dustbins. Though small, she was kind-hearted. She helped Velu with food as well as a regular job as ragpicker.

Q5. What problems do millions of poor children face in India? What basic issue does the story discuss? Ans. This story gives us a picture of children who are bound to work to support not only themselves but also their parents. They can’t go to school, they can’t play like other children of their age. The story draws our attention to the evil of child labour.

Q1. Under what circumstances did Velu become a ragpicker? Ans. Velu was an eleven year old boy. He ran away from home because he was very unhappy with his home economic condition. He came to Chennai where he met a girl of his own age. The girl was carrying a big sack on her back. She was picking up plastic cups and putting them into the sack. Seeing Velu in a miserable condition she took pity on him and got food for him. She brought Velu to her hut, which was built out of wood, plastic and sheets. She gave him a pair of old shoes, a sack and a stick. He wondered what work she wanted him to do. She told him that he was now a ragpicker like her. He too now had to collect things from waste materials. Velu was alone in that big city. He had no option and therefore accepted the job of a ragpicker. 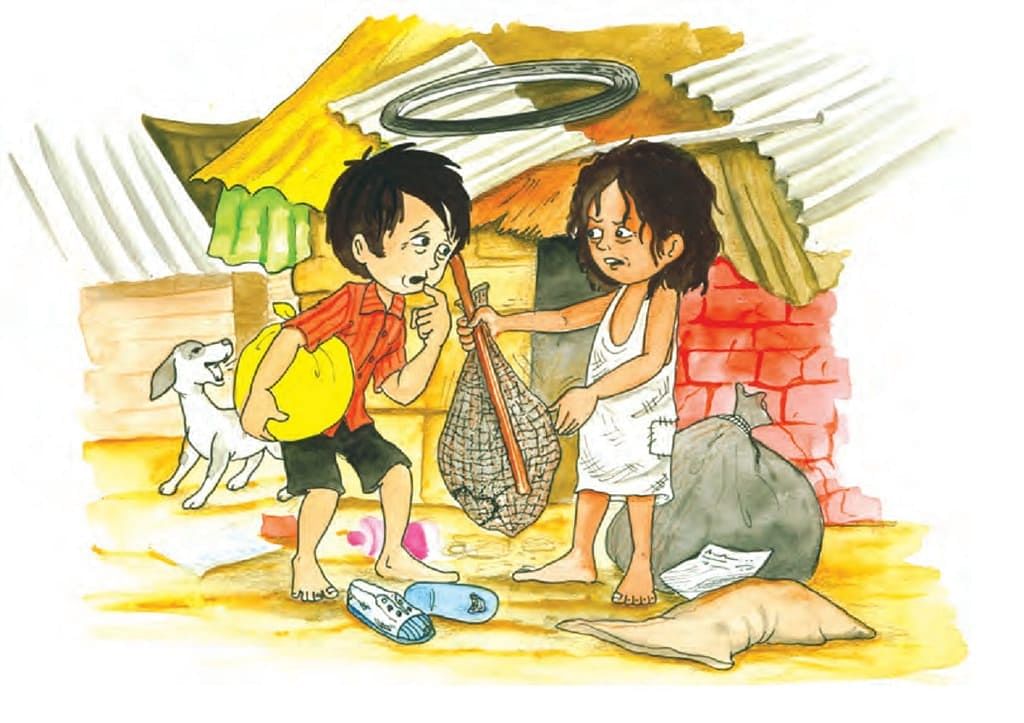 The document Additional Questions Solved - Children at Work Notes | Study English Class 8 - Class 8 is a part of the Class 8 Course English Class 8.
All you need of Class 8 at this link: Class 8