The document Additional Questions Solved - How the Camel Got His Hump Notes | Study English Class 8 - Class 8 is a part of the Class 8 Course English Class 8.
All you need of Class 8 at this link: Class 8

Q2. Which animal in your opinion is man’s best friend and most useful too? Ans. The dog is man’s best friend. It provides security and even draws the sledge on ice. It is known for its faithfulness. The horse and the elephants have also been very friendly to man.

Q5. Who was Djinn? How did he set the camel right? Ans. Djinn was in-charge of all deserts. So the horse, ox and the dog complained to him about the camel’s laziness. The Djinn scolded the camel, gave a hump on its back and ordered it to serve man as did other animals. 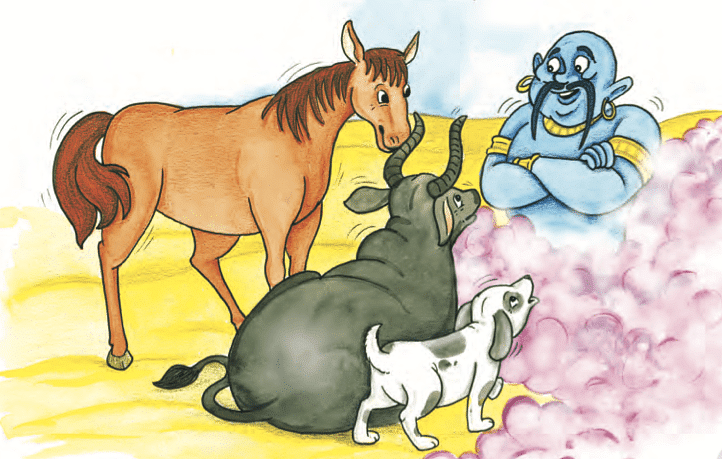 Q1. What made the Three very angry? Ans. The Three (the Dog, the Horse and the Ox) were hard working animals. They did different works for men. The Dog carried heavy loads, the Horse drew carts and the Ox ploughed the field. These three were fed up with the Camel because he didn’t do any work. So one day they complained to Man about the Camel’s laziness. At this the Man became angry. He told the three to leave the Camel alone and work double time to compensate his (Camel’s) work. That made the three very angry. They held a panchayat but it proved in vain. The camel came chewing and laughed at them.

Q2. How did the Camel get a hump? Ans. In the beginning the camel was a lazy animal. He didn’t want to work and lived in the middle of a desert away from other working animals. But the animals never forgot him and his nature. They wanted him to work like them. They complained against him to the Djinn, who was in-charge of all deserts. The Djinn decided to punish such an idle animal. He told the Camel to work like other animals but the Camel showed no willingness to work. This made the Djinn angry. He put a curse on the Camel. Soon the Camel’s back puffed up into a big hump. This is how the Camel got a hump.

The document Additional Questions Solved - How the Camel Got His Hump Notes | Study English Class 8 - Class 8 is a part of the Class 8 Course English Class 8.
All you need of Class 8 at this link: Class 8