The reduction of the dimensions of a MOSFET has been dramatic during the last three decades. Starting at a minimum feature length of 10 mm in 1970 the gate length was gradually reduced to 0.15 mm minimum feature size in 2000, resulting in a 13% reduction per year. Proper scaling of MOSFET however requires not only a size reduction of the gate length and width but also requires a reduction of all other dimensions including the gate/source and gate/drain alignment, the oxide thickness and the depletion layer widths. Scaling of the depletion layer widths also implies scaling of the substrate doping density.

Two types of scaling are common:

(i) constant field scaling and

Constant voltage scaling does not have this problem and is therefore the preferred scaling method since it provides voltage compatibility with older circuit technologies. The disadvantage of constant voltage scaling is that the electric field increases as the minimum feature length is reduced. This leads to velocity saturation, mobility degradation, increased leakage currents and lower breakdown voltages.

After scaling, the different Mosfet parameters will be converted as given by table below :

Where s=scaling parameter of MOS

When is a channel called a short channel?   (i) When junction (source/drain) length is of the order of channel length.   (ii) L is not much larger then the sum of the drain and source depletion width.

We have shown below the comparative graphs of   I-V characteristics for both long channel and short channel length MOSFETs. From graph, it can be clearly concluded that when the channel becomes short, the current in saturation region becomes linearly dependent on applied drain voltage rather than being square dependent. 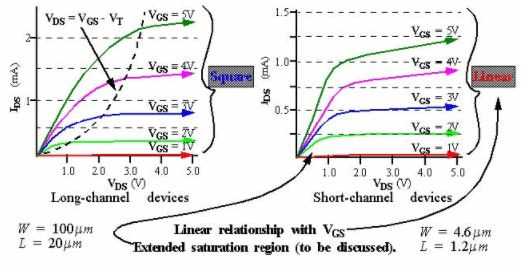 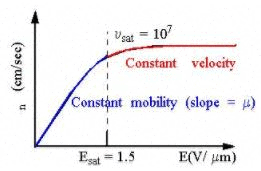 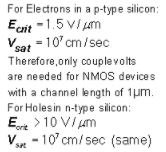