The document Algebra of Complex Numbers - Complex Analysis, CSIR-NET Mathematical Sciences Mathematics Notes | EduRev is a part of the Mathematics Course Mathematics for IIT JAM, CSIR NET, UGC NET.
All you need of Mathematics at this link: Mathematics

Perhaps because of their name, it is sometimes thought that complex numbers are in some way more mysterious than real numbers, that a number such as i =

is not as “real” as a number like 2 or −351.127 or even π. However, all of these numbers are equally meaningful, they are all useful mathematical abstractions. Although complex numbers are a relatively recent invention of mathematics, dating back just over 200 years in their current form, it is also the case that negative numbers, which were once called ﬁctitious numbers to indicate that they were less “real” than positive numbers, have only been accepted for about the same period of time, and we have only started to understand the nature of real numbers during the past 150 years or so. In fact, if you think about their underlying meaning, π is a far more “complex” number than i.

and multiplication deﬁned by

We will let i denote the complex number (0, 1). Then, by our deﬁnition of multiplication, 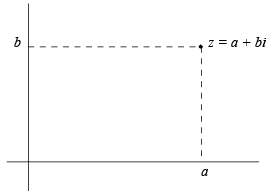 If we identify the real number a with the complex number (a, 0), then we have

Then for any two real numbers, we have

In fact, we may view the latter as a consequence of the ordinary algebraic expansion of the product

It also follows from this formulation that if r is a real number, which we identify with r + 0i, and z = a + bi is a complex number, then

As indicated above, we let C denote the set of all complex numbers. Because of our identiﬁcation of C with the plane, we usually refer to C as the complex plane. Since the description of complex numbers as points in the plane is often associated with the work of Carl Friedrich Gauss (1777-1855) (although appearing ﬁrst in the work of Caspar Wessel (1745-1818)), C is also referred to as the Gaussian plane.

is the multiplicative inverse, or reciprocal, of z = a + bi. Hence we will write

Given another complex number w, we may deﬁne w divided by z by

Deﬁnition Given a complex number z = a + bi, the number a − bi is called the conjugate of z and is denoted

which is the distance in the complex plane from z to the origin.

Deﬁnition Given a complex number z, the magnitude of z, denoted |z|, is deﬁned by

Although (7.1.12) and (7.1.17) are useful expressions, in most situations the easiest way to simplify a quotient of two complex numbers is to multiply numerator and denominator by the conjugate of the denominator.

Deﬁnition : Given a complex number z = a + bi, we call a the real part of z, denoted

, and b the imaginary part of z, denoted

of a complex number z is the point in the complex plane obtained by reﬂecting z about the real axis..

You will be asked to verify these and other standard properties of the complex numbers in Problem 7 at the end of this section. 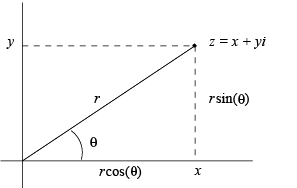 When we write a complex number z in the form z = x + yi, we refer to x and y as the rectangular or Cartesian coordinates of z. We now consider another method of representing complex numbers. Let us begin with a complex number z = x + yi written in rectangular form. Assume for the moment that x and y are not both 0. If we let θ be the angle between the real axis and the line segment from (0, 0) to (x, y), measured in the counterclockwise direction, then z is completely determined by the two numbers |z| and θ. We call θ the argument of z and denote it by arg(z). Geometrically, if we are given |z| and θ, we can locate z in the complex plane by taking the line segment of length |z| lying on the positive real axis, with a ﬁxed endpoint at the origin, and rotating it counterclockwise through an angle θ; the ﬁnal resting point of the rotating endpoint is the location of z . Algebraically, if z = x + yi is a complex number with r = |z| and θ = arg(z), then

Together, r and θ are called the polar coordinates of z. See Figure 7.1.2.

Note that in the last example we could have taken arg

for any integer n. In particular, there are an inﬁnite number of possible values for arg(z) and we will let arg(z) stand for any one of these values. At the same time, it is often important to choose arg(z) in a consistent fashion; to this end, we call the value of arg(z) which lies in the interval (−π, π] the principal value of arg(z) and denote it by Arg(z). For our example,

In general, if we are given a complex number in rectangular coordinates, say z = x + yi, then, as we can see from Figure 7.1.2, the polar coordinates r = |z| and θ = Arg(z) are determined by

Note that, since the range of the arc tangent function is

Since z lies in the third quadrant, we have 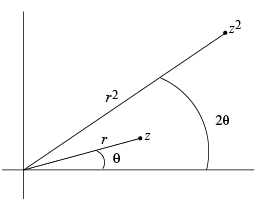 Figure 7.1.3 Geometry of z and z2 in the complex plane

in agreement with our previous observation that

is obtained from z by reﬂection about the real axis.

where we have rounded the real and imaginary parts to four decimal places. 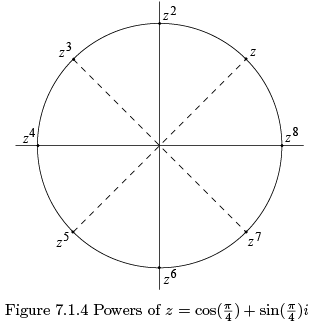 Hence each successive power of z is obtained by rotating the previous power through an angle of π/4 on the unit circle centered at the origin; after eight rotations, the point has returned to where it started. See Figure 7.1.4. Notice in particular that z is a root of the polynomial