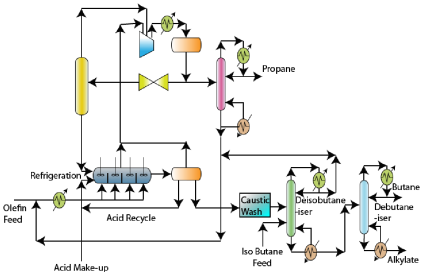 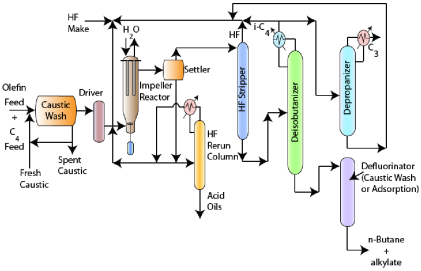 1. Why isobutane is fed to the deisobutanizer unit in the sulphuric acid flow sheet?

Ans: The isobutane feed consists of n-butane and it should be separated so that the alkylation reactor is fed with only isobutane. Now, the issue is to use a separate distillation column for separating isobutane feed into isobutane and butane. This will incur additional costs. Therefore, instead of two separate columns, both separations are carried out in the same distillation column. Ofcourse, costs will be saved by this concept in processing.

2. Explain how compression and cooling will enable the separation of propane and olefin+isoparaffins mixture?

Ans: The separation of propane from isoparaffins and olefins is very difficult due to close boiling points of these streams. Now, compression is also required so as to avoid refrigeration system in the condenser of propane. This is also due to the fact that higher pressures increasing boiling point of the propane and enable the usage of cooling water in the condenser. On the other hand, removing heat from the system will enable adiabatic flash conditions which can be exploited to separate the propane and olefin+isoparaffin mixture.This entire operation has significant research in the field of thermodynamics and mass transfer subjects. Probably, good number of simulation studies have finally yielded the flowsheet to obtain such configurations.

3. What are the advantages of H2SO4 process when compared to the HF process?

Ans: Isobutane is used in excess. If propane is removed first then both the columns have high flow rates. Since column costs are proportional to the flow rates, deisobutanizer is placed before depropoanizer so that the depropanizer can process less feed and hence have lower diameters and cost.

5. What additional units are there in the HF process flow sheet when compared to the sulphuric acid flow sheet?