Height above the sea surface of any place.

The distance of any place from the equator 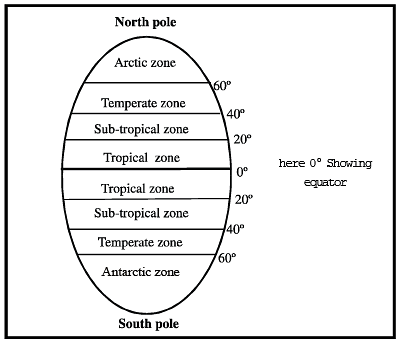 Effect of altitude and latitude are almost same on temperature.

Soil – Soil is the uppermost layer of earths crust formed by weathering of rocks. It is the mixture of living or non living materials.

Soil mineral matter – As a result of weathering the mineral particles of different size are formed. The soil is divided into five types on the basis ofsize of soil particles.

Decomposition (Formation of Humas) : Decomposers break down complex organic matter into inorganic substances like carbon dioxide, water and nutrients and the process is called decomposition.Dead plant remains such as leaves, bark, flowers and dead remains of animals, including fecal matter, constitute detritus, which is the raw material for decomposition. The important steps in the process of decomposition are fragmentation, leaching, catabolism humification and mineralisation.

It is important to note that all the above steps in decomposition operate simultaneously on the detritus.

Humification and mineralisation occur during decomposition in the soil. Humification leads to accumulation of a dark coloured amorphous substance called humus that is highly resistant to microbial action and undergoes

decomposition at an extremely slow rate. Being colloidal in nature it serves as a reservoir of nutrients. The humus is further degraded by some microbes and release of inorganic nutrients occur by the process known as mineralisation.

(i) Mor (Coarse terxtured humus) – It is raw humus and is formed in acidic soil (PH - 3.8 – 4.0) in which decomposition of litter is slow because it has less number of decomposer organism.

(ii) Mull – This is completely decomposed litter i.e. humus because rate of decomposition is fast due to high PH of soil.

SOIL WATER
It is of three types Holard– The total amount of water present in the land is called holard.

1. Field capacity – When soil holds all the water except gravitational water, it is known as field capacity. It is upper limit of water availability.

3. Wilting point : The lower limit of water availability of a soil is called wilting point.

(1) Residual soil – The soil in which soil formation i.e., weathering and pedogenesis, occurs at same place.

(2) Transported soil – Soil in which weathering process occurs at one place and pedogenesis occurs at another place.

(a) Colluvial soil → It is brought by gravity.

(b) Alluvial soil → It is brought through water, it is highly fertile soil.

(d) Eolian soil → This soil is brought through wind.

SOME TERMINOLOGY RELATED TO SOIL:

In thetropical area due to high temperature, high rainfall, litter is decomposed very rapidly in A layer. Due to mineralization of litterAl and Fe are liberated in the upper layer (A - layer) of soil, colour of this soil becomes redish-brown, this process is known as laterization.

PODSOLIZATION :
In temperate area temperature is low and high humidity occurs. Humus and minerals contents dissolve and percolate with water and are leached from A layer to B layer. Due to loss of chemicals the colour of soil of A layer (horizon) turns tolight ashcolour. This process is known as podsolization and soil is known as podosols.

GLEIZATION :
Intundra region due to low temperature and humid condition humus is formed in less quantity and moves slowly in B layer. So colour of B layer becomes blue – grey due to deposition of Fe salt. This process is known as gleization and soil is known as gleys.

1. Precipitation – It is a source of soil water. The hydrological cycle is the movement of water between earth, air and atmosphere.

3. Topography – It includes the physical features of the earth like altitude, slope, exposure, mountain chains valleys plants. It affects distribution of organism by influencing the climatic factor like light, wind, rainfall etc.