Analysis of CE amplifier Voltage gain:To find the voltage gain, consider an unloaded CE amplifier. The ac equivalent circuit is shown in fig. 3. The transistor can be replaced by its collector equivalent model i.e. a current source and emitter diode which offers ac resistance r'e. 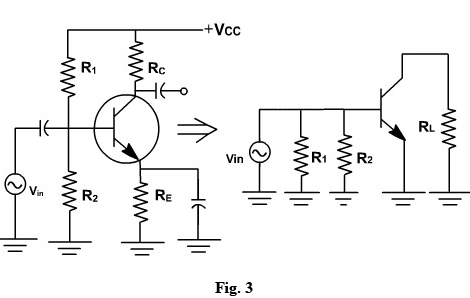 The input voltage appears directly across the emitter diode.

In a normal frequency range of an amplifier, where all capacitors look like ac shorts and other reactances are negligible, the ac input impedance is defined as-

Where vin, iin are peak to peak values or rms values

From the ac equivalent circuit, the input impedance zin is the parallel combination of R1 , R2 and r'e.

The Thevenin voltage appearing at the output is

The simplified ac equivalent circuit is shown in fig. 4.

Select R1 and R2 for maximum output voltage swing in the circuit shown in fig. 5. 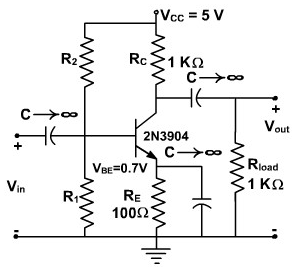 We first determine ICQ for the circuit

The quiescent value for VCE is the given by

The maximum output voltage swing, ignoring the non-linearity's at saturation and cutoff, would be

The load lines are shown on the characteristics of fig. 6 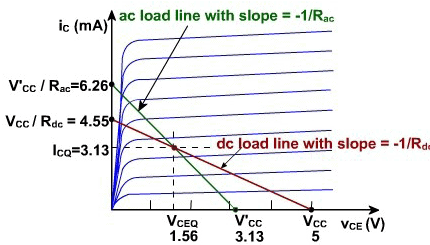 This is well within the 350 mW maximum (given on the specification sheet). The maximum conversion efficiency is

The ac resistance of the emitter diode r'e equals 25mV /IE and depends on the temperature. Any change in r'e will change the voltage gain in CE amplifier. In some applications, a change in voltage is acceptable. But in many applications we need a stable voltage gain is required.To make it stable, a resistance rE is inserted in series with the emitter and therefore emitter is no longer ac grounded.(refer to fig .7). Because of this the ac emitter current flows through rE and produces an ac voltage at the emitter.If rE is much greater than r'e, almost all of the ac input signal appears at the emitter, and the emitter is bootstrapped to the base for ac as well as for dc.In this case, the collector circuit is given by