Horizontal Analysis: A horizontal analysis is a two-year comparison of analysis of the financial statements and its elements. It is also referred to as trend analysis, usually expressed in monetary terms and percentages. This comparison provides analysts with insight into the aspects that could contribute significantly to the financial position or profitability of the organization.For instance, in 2015, a company earned INR 4 lakhs more than its previous year. This increase in turnover appears to be a positive development. However, examine closely, it reveals that the costs of the procuring goods and services increased by INR 4.5 lakhs. The wonderful picture of this additional turnover of INR 4 lakhs is now adjusted to the less positive picture.

Ratio Analysis: A ratio between two quantities is used for representing the relationships between different figures on the profit and loss account, balance sheet, cash flow statement or such other accounting records. It is a form of Financial Statement Analysis, used for obtaining a quick indication of the organization’s financial performance in various key areas.Ratio Analysis as a financial analysis tool possesses many important features. The data provided by the financial statements are available readily. The ratios enable the comparison of firms that differ in size as well as compare an organization’s financial performance with the industry averages. Additionally, ratios could be used in the form of trend analysis for identifying the areas within an organization where performance has deteriorated or improved over time.

Some of the key ratios include:

Analysis of Financial Statement by the Use of Solved Example of Financial Ratios:John Brown is running a business which manufactures nuts and bolts which are then sold to local industrial units. The abridged accounts for 2014 and 2015 are given below: 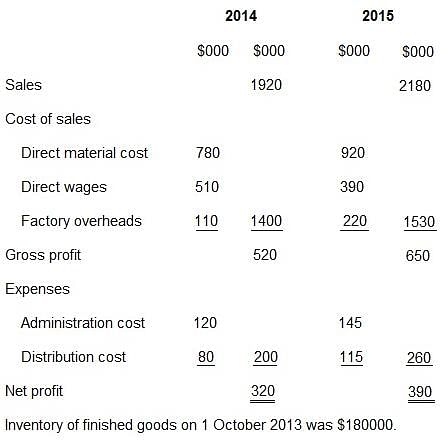 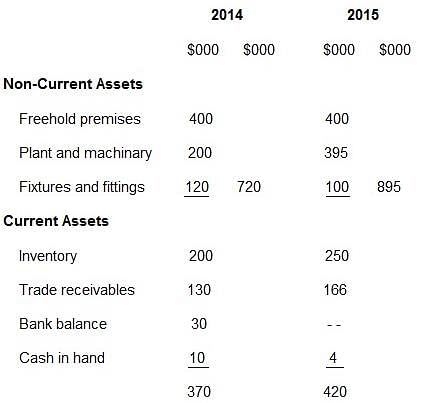 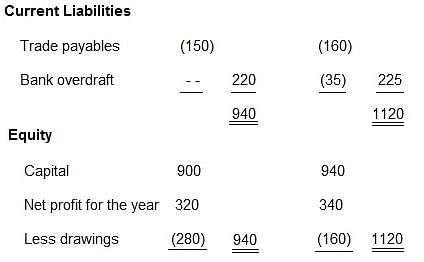 Solution (b):To, John BrownFrom, ABC and Co. (financial analyst)Subject, Analysis of financial statementsAfter going through the financial statements of Brown, we can withdraw the following conclusion:The profitability position has slightly improved in 2014 as reflected from the increase in gross profit ratio, net profit ratio and return on capital employed by 2.74%, 1.22% and by 0.78% respectively. The credit for this improvement may be given to an apparent shift from labor intensive operations to capital intensive operations. This can be verified from the decrease in wage expense ratio (may be due to right sizing) and the increase in factory overheads in proportion to sale (more use of oil, fuel and increased depreciation, insurance and repairs cost on new machines) and the increased investment in plant and equipment.In contrast to the profitability ratios, the assets utilization ratios show a downward trend. From the calculations given, we can observe that non-current assets are ratio has decreased from 2.67 to 2.44 times which reveals an under utilization of non-current assets in the year 2015 as compared to 2014 (mainly due to new huge investment in plant and machinery, the full benefit not being realized for). However, a complete picture can only be seen if the results of 2016 are evaluated.Inventory turnover ratio manifests decrease in the frequency of inventory with which it is turn into sales; its marginal deterioration is result of increase in average inventory level from $190000 to $225000. This increase was mainly expected due increase in scale of production due to new huge investment in plant items. Average collection period has increased from 25 days to 28 days which indicates poor credit management. It may prove to be a good policy provided, there is a corresponding increase in sales in the years to come.Unfavorable turnover ratios of working capital items and new enormous investment in plant results in lower liquidity position as evidenced by decrease in current ratio. Current ratio, however, is still at a reasonable level; in 2014, it was probably too high. However, as we know that current ratio does not consider quality of current assets so liquid ratio has been calculated which also decreased in 2015, however it is still satisfactory but need to be carefully monitored to avoid further dilution, special efforts must be made to improve cash balance which becomes negative in 2015 indicating a decrease of $65000.

The document Analysis of Financial Statements Notes | Study Cost Accounting - B Com is a part of the B Com Course Cost Accounting.
All you need of B Com at this link: B Com
Join Course