The analysis of trusses

A truss: A truss is a structure made of two force members all pin connected to each other.

The method of joints: This method uses the free-body-diagram of joints in the structure to determine the  forces in each member. For example, in the above structure we have 5 joints each having a free body diagram as follows 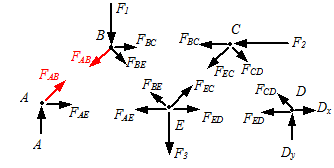 Note how Newton’s third law controls how one introduces FAB on the joints A and on the joint B. For each joint one can write two equations (∑Fx = 0, ∑Fy = 0). The moment equation is trivially satisfied since all forces on a joint pass trough the joint. For example, for the above truss we have 5 joints, therefore we can write 10 equations of equilibrium (two for each joint). In the above example there are seven unknown member forces (FAB, FBC, FCD, FED, FEC, FBE, FAE)  plus three unknown support reactions (A, Dx, Dy), giving a total of 10 unknowns to solve for using the 10 equations obtained from equilibrium.

The method of sections: This method uses free-body-diagrams of sections of the truss to obtain unknown forces. For example, if one needs only to find the force in BC, it is possible to do this by only writing two equations. First, draw the free body diagram of the full truss and solve for 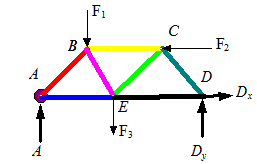 the reaction at A by taking moments about D. Next draw the free body diagram of the section shown and take moments about E to find the force in BC. 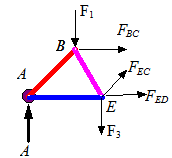 In the method of sections one can write three equations for each free-body-diagram (two components of force and one moment equation).