4.3.1 Definition of the angular impulse of a force

The angular impulse of a force is the time integral of the moment exerted by the force.

To make the concept precise, consider a particle that is subjected to a time varying force F(t) , with components in a fixed basis {i,j,k} , then

denote the position vector of the particle, and 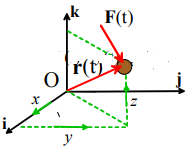 the moment of the force about the origin.

The angular impulse is a vector, and can be expressed as components in a basis 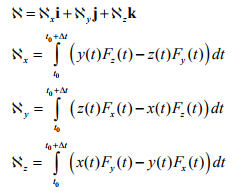 If you know the moment as a function of time, you can calculate its angular impulse using simple calculus. For example for a constant moment, with vector value M0 , the impulse is

4.3.2 Definition of the angular momentum of a particle

The angular momentum is a vector – the direction of the vector is perpendicular to its velocity and its position vectors.

Let r(t) denote the position vector of the particle

denote the moment of F about the origin

denote the angular impulse exerted on the particle

denote the change in angular momentum during the time interval Δt.

The momentum conservation equation can be expressed either in differential or integral form.

Although it’s not obvious, these are just another way of writing Newton’s laws of motion. To show this, we’ll derive the differential form. Start with Newton’s law 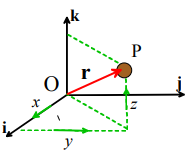 Take the cross product of both sides with r

since the cross product of two parallel vectors is zero. We can add this to the right hand side, which shows that

This yields the required relation.

Angular momentum conservation: For the special case where the force is parallel to r, the moment of the force acting on the particle is zero

and angular momentum is constant

The angular impulse-angular momentum equations are particularly helpful when you need to solve problems where particles are subjected to a single force, which acts through a fixed point. They can also be used to analyze rotational motion of a massless frame containing one or more particles.

1. We assume that the only force acting on the satellite is the gravitational attraction of the earth2. The earth’s radius is 6378.145km

Recall that if the dot product of two vectors vanishes, they are mutually perpendicular. We take a coordinate system with i and j in the plane of the orbit, and k perpendicular to the orbit.

3. We take the satellite orbit to lie in the i , j plane with k perpendicular to the orbit. The angular momentum at apogee and perigee is then

where ra , rp are the distance of the satellite from the center of the earth at apogee and perigee, and va , vp are the corresponding speeds.

4. Since angular momentum is conserved it follows that

Example 2: More orbital motion. The orbit for a satellite is normally specified by a set of angles specifying the inclination of the orbit, and by quoting the distance of the satellite from the earths center at apogee and perigee ra , rp It is possible to calculate the speed of the satellite at perigee and apogee from this information. 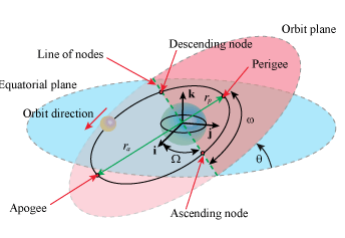 1. From the previous example, we know that the distances and velocities are related by

3. The potential energies when the satellite is at perigee and apogee are

4. The kinetic energies of the satellite at perigee and apogee are

5. The kinetic energy of the earth can be assumed to be constant. Energy conservation therefore shows that

6. The results of (1) and (5) give two equations that can be solved for va , vp in terms of known parameters. For example, (1) shows that

- this can be substituted into (5) to see that