The document Angular momentum and torque Physics Notes | EduRev is a part of the Physics Course Basic Physics for IIT JAM.
All you need of Physics at this link: Physics

A particle of mass m and velocity v has linear momentum p = mv. The particle may also have angular momentum L with respect to a given point in space. If r is the vector from the point to the particle, thenL = r × p   (43) 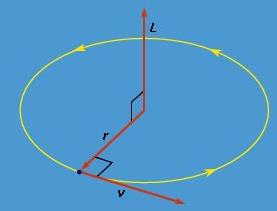 Figure: The angular momentum L of a particle traveling in a circular orbit.

L = rp = mvr    (44)The significance of angular momentum arises from its derivative with respect to time,

where p has been replaced by mv and the constant m has been factored out. Using the product rule of differential calculus,

In the first term on the right-hand side of equation (46), dr/dt is simply the velocity v, leaving v × v. Since the cross product of any vector with itself is always zero, that term drops out, leaving

Here, dv/dt is the acceleration a of the particle. Thus, if equation (47) is multiplied by m, the left-hand side becomes dL/dt, as in equation (45), and the right-hand side may be written r × ma. Since, according to Newton’s second law, ma is equal to F, the net force acting on the particle, the result is

Equation (48) means that any change in the angular momentum of a particle must be produced by a force that is not acting along the same direction as r. One particularly important application is the solar system. Each planet is held in its orbit by its gravitational attraction to the Sun, a force that acts along the vector from the Sun to the planet. Thus, the force of gravity cannot change the angular momentum of any planet with respect to the Sun. Therefore, each planet has constant angular momentum with respect to the Sun. This conclusion is correct even though the real orbits of the planets are not circles but ellipses.

The quantity r × F is called the torque τ. Torque may be thought of as a kind of twisting force, the kind needed to tighten a bolt or to set a body into rotation. Using this definition, equation may be rewritten