ATC systems are intelligent real-time dynamic traffic control systems which are designed to effectively respond to rapid variations in dynamic traffic conditions. It is an advanced process to control the traffic. It is a traffic responsive system that use data from vehicle detectors and optimize traffic signal time in real time. The timing plan of traffic controllers changed automatically. The technique employs digital computers for achieving the desired objective.

The basic system Originally, it was assumed that the power of the digital computer could be used to control many traffic signals from one location, allowing the development of control plans. The basic concept can be summarized thus: the computer sends out signals along one or more arterial. There is no feedback of information from detectors in the field, and the trafficsignal plans are not responsive to actual traffic conditions. Earlier,the plans for such a system are developed based on the engineers usage of data from field studies to generate plans either by hand, or by computer,using packages available at the time. The computer solutions were then run on another machine, or in off hours on the control computer when it was not being used for control of the traffic signals. Though this “off-line” system of control plans gives an image of a deficient system, there are many advantages of this “limited” system. These include:

2. Ability to have multiple plans and special plans: In many localities a three-dial controller is quite sufficient: if traffic is generally regular, three basic plans (A.M. peak, P.M. peak,

off-peak) can meet the needs. The computer opens the possibility to have an N-dial controller, with special plans stored for certain days. With appropriate plans stored for each such event, the plans can be called up by time of day, or by operator intervention.

3. Information on equipment failures: The early systems simply took control of electromechanical controllers, driving the cam-shaft from the central computer and receiving a confirmation signal. Failure to receive this signal meant trouble. The information provided by the control computer allowed such failures to be detected and repair crews dispatched.

4. Performance data on contractor or service personnel: With a failure detected and notification made, the system can log the arrival of the crew and/or the time at which the intersection is returned to active service.

Collection of traffic data The ability of a computer to receive great amount of data and process it is made use of by detectors in the field for sending information back to the central location. If the information is not being used in an “online” setting and hence still does not influence the current plan selection. Typically, the computer is being used as the tool for the collection of permanent or long-term count data.

Traffic data used for plan selection Fig. 40:1 shows a computer control system that actually uses the traffic data to aid in plan selection. This can be done in one of three principal ways:

1. Use library - Monitor deviations from expected pattern: This concept uses a time-of-day approach, looking up in a library both the expected traffic pattern and the preselected plan matched to the pattern. The actual traffic pattern can be compared to the expected, and if a deviation occurs, the computer can then look through its library for a closer match and use the appropriate plan.

2. Use library - Match plan to pattern: This is a variation on the first concept, with the observed pattern being matched to the most appropriate pre-stored pattern and the corresponding plan being used.

3. Develop plan on-line: This concept depends on the ability to do the necessary computations within a deadline either as a background task or on a companion computer dedicated to such a computations. This approach presumes an advantage to tailoring the control plan to specific traffic data. It is necessary to note that the time between plan updates is constrained by the speed with which the on-line plan computations can be done.

The desire to have more frequent updates implicitly assumes that the real traffic situation can be known precisely enough to differentiate between consecutive update periods.

The various Advantages of an area traffic control system are

• Reducing accidents- Are traffic control system reduces the no of accident by reducing the congestion as congestion is less the traffic flow will be smooth so accident also will be less.

The various disadvantages of an area traffic control system are

• Very complex- Area traffic control system is a very big system which includes many unites in it like Vehicle Detectors, Intersection Controller, Communication Network, Application Software, Central (Regional) Control System. These unit is use to perform different-different task for the system. These unit and task make it very complex.

• Suitable only for lane following traffic- In area traffic control system we use vehicle detector to collect the data to find the actual flow and to get signal timing according to the present condition of traffic. These vehicle detectors detect the vehicle on the basis of lane. For example we are collecting data for tow lane road then the detectors will able to detect the vehicle which will come from their respective lane and the vehicle which is using space other than these two lanes cannot be detected. So data will not be accurate. So we can say that it will give best result only for lane following traffic.

Vehicle Detectors is used to detect the presence of vehicles, to collect data to find average speed, vehicle flow, vehicle density, queue length measurement. VD acts as a nodal point between vehicle and intersection controller. Detector could be of various types example-ultrasonic, microwave radar, infrared laser radar, non-imaging passive infrared, video imaging, acoustic array, magnetic loop Inductive loop vehicle detector is commonly used. Fig. 40:2 is showing example of Vehicle Detectors. In Fig. 40:2 two detectors are shown, 1 is for straight going traffic which will detect the vehicle which will go straight and 2 is right turning traffic which will detect the vehicle which will take right turn from there.

The communication network transfers data from the signal controller, to the central control station where optimized signal timings and phases are determined and it again transfers in 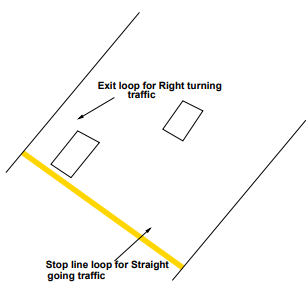 formation to the signal controller as per the data processed. It transfers the data obtained from detectors to central control which then implements the signal timings as instructed at the intersection. Fig. 40:3 is showing the communication network.

Application software is the software used behind the whole ATC system which performs the entire task. It is a large and complex program involving multiple systems, various procedures for implementation. Functions of Application software are: It defines the architecture flows, activities and functions and user services that planners want to deliver. 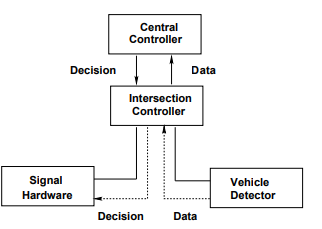