The document Area of a Triangle Using Determinants Mathematics Notes | EduRev is a part of the Mathematics Course Algebra for IIT JAM Mathematics.
All you need of Mathematics at this link: Mathematics

Determinants and Matrices as Equation SolverSince now we are familiar with the way of calculating the determinant of a square matrix. Here, we will discuss the way to solve a system of linear equations in two or three variables. With the help of the determinant, we can also check for the consistency of linear equations.• Consistent System: If one or more solution(s) exists for a system of equations then it is a consistent system• Inconsistent System: A system of equations with no solution is an inconsistent system.

Solved Example for YouProblem: Suppose you have three numbers. The sum of the two numbers and the twice of the second equals 2. The sum of the second and third when subtracted from the twice of first gives 1. The difference of thrice of first and five times the third gives 5. Rewrite the statement in form of the system of equations. Solve it using Matrix Method as an equation solver.Solution: Assume that x, y, and z are the three numbers. Rewriting the above statement we have the following system of equationsx + 2y + z = 22x – y – z = 13x – 5y = 5In matrix notation, we have

The inverse of the matrix A is A−1.

Example 1: Find the adjoint of the matrix:

Solution: We will first evaluate the cofactor of every element, 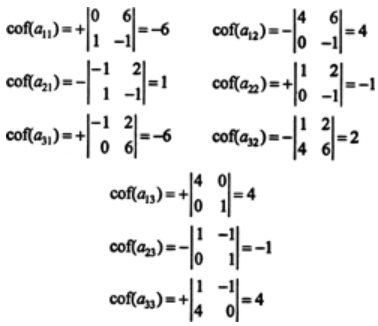 The Relation between Adjoint and Inverse of a MatrixTo find the inverse of a matrix A, i.e A-1 we shall first define the adjoint of a matrix. Let A be an n x n matrix. The (i,j) cofactor of A is defined to beAij = (-1)ij det(Mij),where Mij is the (i,j)th minor matrix obtained from A after removing the ith row and jth column. Let’s consider the n x n matrix A = (Aij) and define the n x n matrix Adj(A) = AT. The matrix Adj(A) is called the adjoint of matrix A. When A is invertible, then its inverse can be obtained by the formula given below.

The inverse is defined only for non-singular square matrices. The following relationship holds between a matrix and its inverse:AA-1 = A-1A = I, where I is the identity matrix.

Example 2: Determine whether the matrix given below is invertible and if so, then find the invertible matrix using the above formula.

Solution: Since A is an upper triangular matrix, the determinant of A is the product of its diagonal entries. This, we have det(A) = -1, which is a non-zero value and hence, A is invertible. To find the inverse using the formula, we will first determine the cofactors Aij of A. We have,

Then the adjoint matrix of A is

Using the formula, we will obtain the inverse matrix as

Since the sum of the product of elements of a row (or a column) with corresponding cofactors is equal to |A| and otherwise zero, we have

The determinant of the product matrices is equal to the product of their respective determinants, that is, |AB| = |A||B|, where A and B are square matrices of the same order.Remark: We know that

Writing determinants of matrices on both sides, we have

Thus A is invertible and

Solved Examples for YouQuestion: With 1, ω, ω2 as cube roots of units, inverse of which of the following matrices exist?

Solution: Option D. Inverse of a matrix exists if its determinant if not equal to 0. For option A, B and C, the determinants are equal to zero, hence the inverse does not exist for any of the given matrices.