MEAN : There are three types of mean :
(i) Arithmetic Mean (A.M.)
(ii) Geometric Mean (G. M.)
(iii) Harmonic Mean (H.M.) Of these the Arithmetic mean is the most commonly used. In fact, if not specifically mentioned by mean we shall always refer to arithmetic Mean (AM) and calculate accordingly.

Note. Often we do not write xj , x means summation over all the observations.

In particular, when the weights (or frequencies) f1 , f2……f n are all equal. We get the simple Arithmetic Mean.

(i) Ordinary method (or Direct Method) In this method the mid-values of the class-intervals are multiplied by the corresponding class-frequencies. The sum of products thus obtained is divided by the total frequency to get the Mean. The mean x is given by

where x = mid-value of a class and N = total frequency

Example 3 : Calculate the mean of daily-wages of the following table : 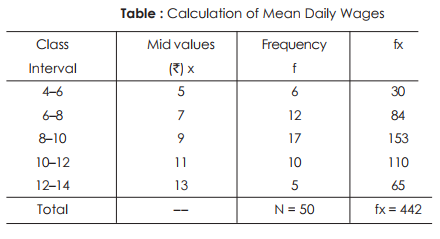 In this method, the mid-value of one class interval (preferably corresponding to the maximum frequency lying near the middle of the distribution) is taken as the assumed mean (or the arbitrary origin) A and the deviation from A are calculated. The mean is given by the formula :

Example 4: Compute the Arithmetic Mean of the following frequency distribution : 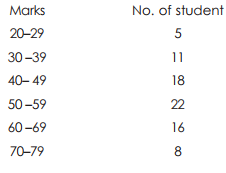 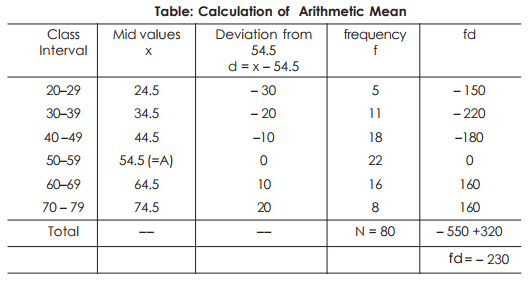 Calculation of A. M. from grouped frequency distribution with open ends

If in a grouped frequency distribution, the lower limit of the first class or the upper limit of the last class are not known, it is difficult to find the A.M. When the closed classes (other than the first and last class) are of equal widths, we may assume the widths of the open classes equal to the common width of closed class and hence determine the AM. But we can find Median or Mode without assumption.

1. The sum total of the values fx is equal to the product of the number of values of their A.M.
e.g. Nx = fx.

2. The algebraic sum of the deviations of the values from their AM is zero. If x1 , x2……xn are the n values of the variable x and

are called the deviation of x1 , x2 ………..xn respectively from from

Algebraic sum of the deviations

Similarly, the result for a weighted AM can be deduced.

and another group of n2 values has AM

In general, for a group the AM

For one missing frequency : 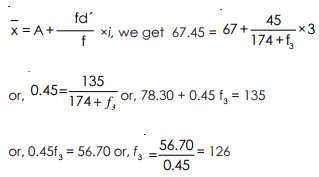 Example 7: The A.M. of the following frequency distribution is 1.46 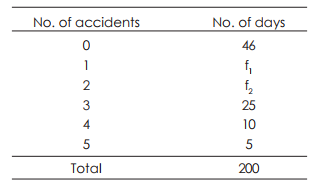 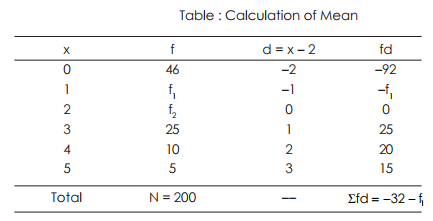 Example 8 : Arithmetic mean of the following frequency distribution is 8.8. Find the missing frequencies :

Example 9. The mean of 20 observations is found to be 40. Later on, it was discovered that a marks 53 was misread as 83. Find the correct marks.

Example 10. A.M. of 5 observations is 6. After calculation it has been noted that observations 4 and 8 have been taken in place of observations 5 and 9 respectively. Find the correct A.M.

(i) The difference between any two variables is 4; so the width of class-intervals will be 4. Accordingly, we get the general group frequency distribution as follows :

Advantages of Arithmetic Mean
(i) It is easy to calculate and simple to understand.
(ii) For counting mean, all the data are utilised. It can be determined even when only the number of items and their aggregate are known.
(iii) It is capable of further mathematical treatment.
(iv) It provides a good basis to compare two or more frequency distributions. (v) Mean does not necessitate the arrangement of data.

Disadvantages of Arithmetic Mean
(i) It may give considerable weight to extreme items. Mean of 2, 6, 301 is 103 and more of the values is adequately represented by the mean 103.
(ii) In some cases, arithmetic mean may give misleading impressions. For example, average number of patients admitted in a hospital is 10.7 per day, Here mean is a useful information but does not represent the actual item.
(iii) It can hardly be located by inspection.

Example 12 : Fifty students appeared in an examination. The results of passed students are given below : 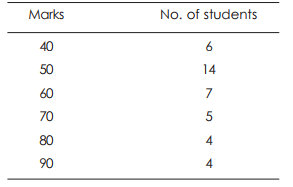 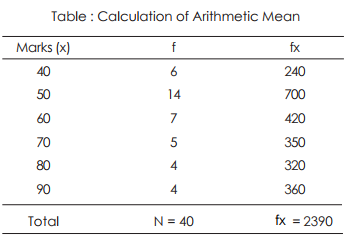 Example 13. From the following frequency table, find the value of x if mean is 23.5

Example 14 : The mean salary of all employees of a company is ` 28,500.The mean salaries of male and female employees are ` 30,000 and ` 25,000 respectively. Find the percentage of males and females employed by the company.

Let number of male employees be n1 and that of female be n2 . We know 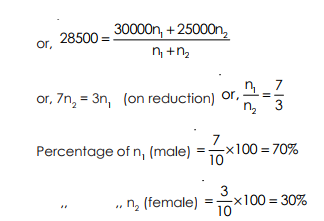