What are Aromatic Hydrocarbons?

Aromatic Hydrocarbons are circularly structured organic compounds that contain sigma bonds along with delocalized pi electrons. They are also referred to as arenes or aryl hydrocarbons.

A few examples of aromatic hydrocarbons are provided below. It can be observed that all these compounds contain a benzene ring.

The aromatic hydrocarbons which do not contain a benzene ring are commonly referred to as heteroarenes. All of these heteroarenes obey Huckel’s rule (total number of pi electrons in a monocyclic ring = 4n + 2 where n is any positive integer or zero).

In these types of compounds, a minimum of one carbon is replaced by either nitrogen, oxygen, or sulphur. Common examples of heteroarenes include furan (contains oxygen) and pyridine (contains nitrogen).

“The first compound that was categorized as an aromatic hydrocarbon was benzene”. It is also the most complex aryl hydrocarbon. Each carbon atom belonging to the benzene ring has two carbon-carbon sigma bonds, one carbon-hydrogen sigma bond, and one double bond with a neighbouring carbon in which the pi electron is delocalized.This delocalization of pi electrons in the benzene molecule is represented by a circle inside the hexagon. The bond order of all carbon-carbon bonds in this molecule is considered to be 1.5 and this equivalency can be explained with the help of the resonance structures of benzene. Some general properties of aromatic hydrocarbons have been listed below.

It can be noted that these compounds can be either monocyclic or polycyclic.

Many organic chemical reactions involve the use of aromatic hydrocarbons as the primary reactant. Some such reactions are listed in this subsection along with a brief description of each of these reactions.

These reactions involve the replacement of one substituent on the ring of an aromatic hydrocarbon, commonly a hydrogen atom, by a different substituent group.The common types of aromatic substitution reactions include:

2. Coupling Reactions In these types of reactions, the coupling of two fragments which have a radical nature is achieved with the help of a metal catalyst. When aromatic hydrocarbons undergo coupling reactions, the following type of bonds can be formed.

An example of a coupling reaction involving aromatic hydrocarbons can be observed in the arylation of perfluorobenzenes, as illustrated below.

The catalyst used in this reaction is Palladium(II) acetate. It can also be noted that DMA is the abbreviation of Dimethylacetamide.

3. Hydrogenation Reactions The hydrogenation reactions involving arenes generally lead to the formation of saturated rings. An example of such a reaction is the reduction of 1-naphthol into a mixture containing different isomers of decalin-ol. Another example of such a reaction is the hydrogenation reaction of resorcinol with the help of spongy nickel (also referred to as Raney nickel) and aqueous NaOH. This reaction proceeds via the formation of an enolate, and the successive alkylation of this enolate (with methyl iodide) to yield 2-methyl-1,3-cyclohexanedione.

Benzene is one of the most important organic compounds with the chemical formula C6H6. Benzene is the parent compound of the various aromatic compound.

Benzene is the simplest organic, aromatic hydrocarbon. Benzene is one of the elementary petrochemicals and a natural constituent of crude oil. It has a gasoline-like odour and is a colourless liquid. Benzene is highly toxic and carcinogenic in nature. It is primarily used in the production of polystyrene.Benzene is a naturally occurring substance produced by volcanoes and forest fires and present in many plants and animals, but benzene is also a major industrial chemical made from coal and oil. As a pure chemical, benzene is a clear, colourless liquid. In industry benzene is used to make other chemicals as well as some types of plastics, detergents, and pesticides. It is also a component of gasoline.

The word benzene derives historically from gum benzoin, sometimes called ‘Benjamin’. Gum benzoin was known as an aromatic resin. Michael Faraday, an English scientist first discovered Benzene in illuminating gas. The name benzene was given by German Chemist Mitscherich in 1833. The cyclic structure of benzene remained a mystery until 1865 when German professor August Kekule elucidated it when he dreamt of a snake biting its own tail.However, Kekule did not discover the presence of interactions between the double bonds. Americal professor Linus Pauling proposed that benzene exhibited a hybrid structure composed of delocalized electrons. This was the refinement of Kekule’s discovery. Benzene has a somewhat pleasant, sweet smell, however it is carcinogenic.

Benzene was discovered in 1825 by the English physicist Michael Faraday, and was made available in large quantities in 1842 after it was found to contain benzene. Large amounts of benzene are now extracted from petroleum. Benzene is a colorless liquid with a characteristic odor of formula C6H6.Benzene is a closed ring of six carbon atoms linked by bonds that alternate between single and double bonds. Each carbon atom is bound by a single hydrogen atom. Benzene melts at a temperature of 5.5 ° C, boils at 80.1°C. Benzene and its derivatives are part of an essential chemical community known as aromatic compounds. Benzene is a precursor in the production of medicines, plastics, oil, synthetic rubber and dyes.As a result, the hydrogenation of benzene happens much more slowly than the hydrogenation of other organic compounds containing carbon-carbon double bonds, and benzene is much more difficult to oxidize than alkenes. Most of the reactions of benzene belong to a class called electrophilic aromatic substitution, which leaves the ring intact but replaces one of the hydrogens attached to it. These reactions are versatile and commonly used for the preparation of benzene derivatives.

The structure of benzene has been of interest since its discovery. Benzene is a cyclic hydrocarbon (chemical formula: C6H6), i.e., each carbon atom in benzene is arranged in a six-membered ring and is bonded to only one hydrogen atom. According to molecular orbital theory, benzene ring involves the formation of three delocalized π – orbitals spanning all six carbon atoms, while the valence bond theory describes two stable resonance structures for the ring. 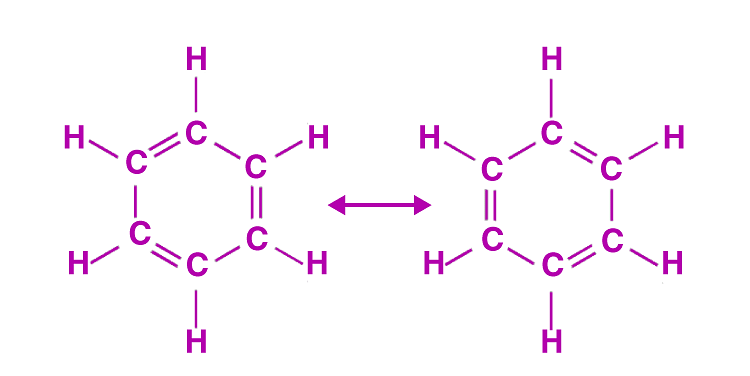 The various properties of benzene are mentioned below:

Resonance of BenzeneThe oscillating double bonds in the benzene ring are explained with the help of resonance structures as per valence bond theory. All the carbon atoms in the benzene ring are sp2 hybridized. One of the two sp2 hybridized orbitals of one atom overlaps with the sp2 orbital of adjacent carbon atom forming six C-C sigma bonds. Other left sp2 hybridized orbitals combine with s orbital of hydrogen to form six C-H sigma bonds. Remaining unhybridized p orbitals of carbon atoms form π bonds with adjacent carbon atoms by lateral overlap. This explains an equal possibility for the formation of C1 –C2, C3 – C4, C5 – C6 π bonds or C2 – C3, C4 – C5, C6-C1 π bonds. The hybrid structure is represented by inserting a circle in the ring as shown below in the figure. Hence, it explains the formation of two resonance structures proposed by Kekule.

Benzene is an aromatic compound, as the C-C bonds formed in the ring are not exactly single or double, rather they are of intermediate length. Aromatic compounds are divided into two categories: benzenoids (one containing benzene ring) and non-benzenoids (those not containing benzene ring), provided they follow Huckel rule. According to Huckel rule, for a ring to be aromatic it should have the following property:

Benzene is used in various industrial processes such as in the manufacture of lubricants, plastics, rubbers, dyes, synthetic fibres, etc. However, it has non-industrial uses too which are limited due to the reason benzene is toxic and carcinogenic. The different uses of Benzene are mentioned below.