Global production and consumption of benzene in 2009 were between 36.4 and 36.6 million metric tons. Average global capacity utilization was 69.2 percent in 2009, lower than in 2008. Global benzene consumption is estimated to have decreased by 3.8 percent in 2009; however, it is expected to average growth of 4.7percent per year from 2009 to 2014, and 2.6percent per year from 2014 to 2019 . Ethyul benzene/styrene monomer and cumene/phenol with demand shares of 52.6percent and 18.3percent respectively of the global benzene market respectively are the leading end-use segments for benzene in 2010. Other uses such as cyclohexane, nitrobenzene and LAB collectively consumed less than 15percent of global benzene demand in 2010.

Global production and consumption of mixed xylenes in 2009 were each approximately 41 million metric tons. Global capacity utilization was around 74percent in 2009. Xylenes consumption in 2009 is estimated to have increased by around 4.6percent from 2008; it is expected to average growth of 5.2percent per year from 2009 to 2014, and 3.3percent per year from 2014 to 2019. Operating rates are expected to drop in 2010 but gradually increase afterward. Product profiles of major aromatics-BTX are given in Table M-VII 8.1. 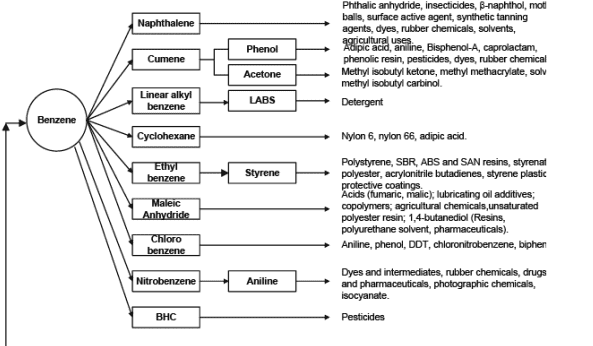 Global production and consumption of p-xylene in 2009 were each approximately 27.6 million metric tons. Global capacity utilization was 83percent in 2009, unchanged from 2008. p-Xylene consumption is estimated to have increased by approximately 4.7percent in 2009; it is expected to average growth of 5.5percent per year from 2009 to 2014, and 3.5percent per year from 2014 to 2019.

Global production and consumption of o-xylene in 2009 were approximately 3.7 million metric tons. Global capacity utilization was 66percent in 2009. o-Xylene consumption is estimated to have increased slightly in 2009; it is forecast to average growth of 3.2percent per year from 2009 to 2014, slowing to 2.4percent per year from 2014 to 2019. Average global utilization rates are expected to remain in the 70s range throughout the forecast period .

Ethyl benzene and styrene are two important aromatics. Ethyl benzene is mainly used for making styrene. Styrene which finds application in synthetic rubber and polymer industry for the manufacture of SBR and polystyrene, ABS plastic.

Major route for styrene manufacture is dehydrogenation of ethyl benzene which is manufactured by alkylation of benzene. Styrene plant consists of two major units. The process involves:

Ethyl benzene is made by alkylation of benzene with ethylene. Ethylene can be produced from either from molasses route or naphtha/gas cracker. The convention alkylation catalysts are metal chlorides (BF3,AlCl3, etc) and mineral acids (HF,H2SO4). However, with development of zeolite, now the benzene alkylation I is done by using ZSM-5 catalysts using vapor-phase process [Mobil-badger Process] and liquid phase alkylation using MCM-22 azeolite proprietary catalyst based catalyst.

Vapour Phase Alkylation of Benzene: The process consists of vapor phase alkylation of benzene with ethylene using zeolite catalyst in a fixed bed catalytic distillation technology. Alkylation and distillation takes place in the alkylator. Unreacted ethylene, and benzene vapour are condensed and fed to the finishing reactor where the remaining alkylation is completed in the presence of a catalyst. The product stream goes to fractionating columns where ethyl benzene is separated from the higher ethylated benzene and heavy ends. Higher ethylated alkyl benzene is sent to the trans-alkylator where its trans-alkylated to produce additional ethyl benzene.

Styrene is one of the most important monomers for the production of polymers, resins and rubber. The biggest consumer of styrene monomer is polystyrene, other major derivatives are expanded polystyrene, Styrene butadiene(SB) latex, SB rubber, styrene block co-polymers (eg: ABS, MBS, SBS)

Styrene is made by catalytic dehydrogenation of ethyl benzene

Lumus/UOP EB One Process: Styrene is made by catalytic dehydrogenation of ethylbenzene in the presence of steam. In Lumus/UOP EB one process involves first alkylating benzene with ethylene followed by dehydrogenating the EB to form styrene. The benzene and recycled benzene are preheated the liquid phase reactor containing zeolite catalyst. The polyethylbenzene formed during alkylkation is fed to another reactor for transalkylating with benzene. Transalkylation reaction is isothermal and reversible in distillation section. The reactor effluent from both reactions is sent to the distillation section for separating ethyl benzene from polyethylbenzene.

During dehydrogenation stages air or oxygen is introduced to partly oxidize the hydrogen to reheat the process gas and to remove the equilibrium constrain for dehydrogenation reaction. Reactor effluents are cooled to recover waste heat and condensed, uncondensed gases are used as fuel. The condensed product containing styrene is sent to distillation columns for separating styrene monomer, unconverted ethyl benzene is recycled.

Toluene is formed during the process which is recovered

Innovative SNOW Technology: The snow technology has been jointly developed by Snamprogetti and Dow represents a technological and economical breakthrough in styrene production and uses benzene and ethane as raw material which is dehydrogenated in the same reaction for EB dehydrogenation. SNOW reactor is rise type.