The document Aryan Immigration UPSC Notes | EduRev is a part of UPSC category.
All you need of UPSC at this link: UPSC

ARYAN IMMIGRATION1. The word Aryan is borrowed from ‘Arya’ in Sanskrit or ‘Airyan’ in Zend, which means ‘of good family’. 2. Aryan entered India sometime in the second millennium B.C. These people started moving from their original homeland and migrated westwards, southwards and eastwards. 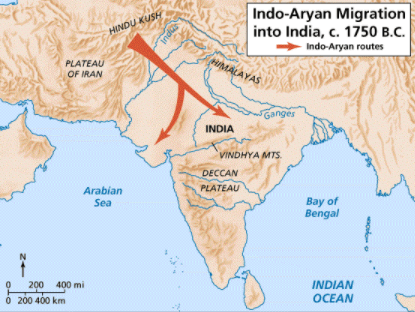 3. The Kassites, who conquered Babylon, belonged to this stock. 4. In the excavations at Boghazkoi in Asia Minor, which date about 1400 B.C., inscriptions are found containing the names of deities like Indra, Varuna, and Nasatya.5. The Aryan immigration to India was not a single organised action but one extending over centuries.6. The exact course of expansion in India can not be traced due to lack of archaeological evidence. 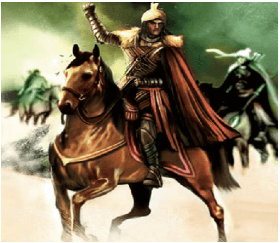 BATTLE OF TEN KINGS1. The Rig Vedic Aryans seems to have been divided into two rival groups.2. One of these included the Srinjayas and Bharatas.3. To the other group belonged the Yadus, Turvasas, Druhyas, Anus and Purus, who were in alliance with five indigenous tribes.4. The battle was fought between Bharatas and its ally on the one side and groups of the above mentioned ten tribes.5. The battle was fought on the bank of the river Parusni.6. The war ended with the victory of the Bharatas led by Sudas, the defeated side was led by the Puru King Purukutsa.7. More important than the internal conflicts of the Aryans were their struggle with the non-Aryans, which was inevitable in course of their expansion in India.8. In the conflict Divodasa took command and defeated the local chieftain Sambara.ORIGINAL HOME OF ARYANS1. Arctic region: B.G. Tilak2. Greenland: Strzygowski3. Swedish coastal region: T.J. Engelbrecht4. Scandinavia: Penka5. Central Germany: G. Kossina and H. Hirt6. Danube valley: P. Giles7. Siberia: J. De Morgan8. Central Asia: Adolf Pictet9. India: Ganganath Jha, D.S. Trivedi, L.D. Kala and A.C. Das.10. South Russia: H. Peake, Gordon Childe and B.K. Ghosh.SIMILARITY BETWEEN VEDA AND AVESTA(i) The ceremony of upanayana is the same.(ii) The conventional number of gods remained thirty-three.(iii) Like the Vedic gods, those of the Avesta to hold up the sky to prevent the falling down.(iv) Image worship is unknown in both the Avesta and the Veda.(v) There was a large number of common cults words such as homa (soma), manthra (mantra), yazata (yajata) etc. 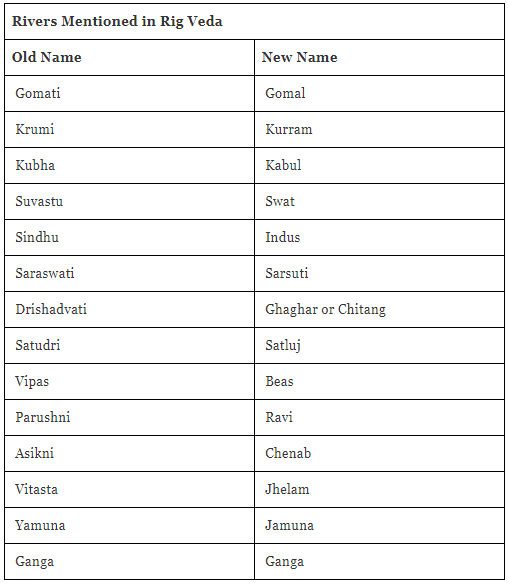 DATES(i) Tilak: 8000 B.C.(ii) H. Jacobi: 4500 B.C.(iii) M. Winternitz: Later half of 3rd millennium B.C.(iv) F.E. Pargiter: 2000 B.C.(v) Max Muller: 1200 B.C.(vi) B.K. Ghosh: 1000 B.C.(vii) M. Wheeler: 1500 B.C.    GEOGRAPHICAL AREA KNOWN RIG VEDIC PERIOD1. Rig Veda helps us with rich information in respect of their early settlements in India.2. India was confined to the area which came to be known as the Sapta-Sindhu, comprising of the modern day Eastern Afghanistan, Punjab and parts of Western U.P.3. That the former region was occupied by the Aryan is obvious from the mention of rivers like the Kumbha, Suvastu, Krumu, Gomti, Susartu, Sindhu, and its five tributaries - Vitasta, Askini, Parushni, Bipasha and Sutaria.4. Mentions are also made of Ganga, Yamuna, Saraswati, Ghaggar and Saryu etc.5. Himalaya is also mentioned.6. The Rigveda refers to the profit-seeker merchants going to the sea. LATER VEDIC PERIOD1. Further expansion of the Aryans to parts of eastern Rajasthan, eastern UP and Northern Bihar.2. Mention of more rivers such as Narmada, Gandak, Chambal etc.3. The Atharva veda refers to Mujavant which may be safely identified as the modern Hindukush mountains.4. Vidhyas (Southern mountains) are also mentioned.5. Satapatha Brahmana mentions the Eastern and Western sea.6. The places - Kampala, Panchakra, Kosala and Videha are mentioned.7. The later Vedas give three known divisions of the country:

8. The Aitareya Brahmana divides the whole country into five parts:

1. The Bharatas were residents, in the time of the Rigveda, of the region between the Saraswati and the Yamuna.2. The Purus were closely connected with the Bharatas, and they lived on either side of the Saraswati [Bharatas and Purus amalgamated forming Kurus].3. Closely allied with the Bharatas was the tribe of the Srinjayas who lived in their neighborhood, probably in Panchala.4. The Druhyus, Turvasas and Anus lived between the Asikini and Purushni.5. The Lady and Turvasa lived in Southern Punjab and probably further South.6. The Matsya lived in the region of modern Alwar, Bharatpur and Jaipur district. 8. The Chedis, who dwelt probably between the Yamuna and the Vindhyas, had a very powerful king named Kasu.9. The Usinaras were dwelling in the middle country.10. The Kikatas, who were non-Aryans, were living in Magadha.11. The Chandalas, Parkas, and Sinus etc. were Dasa tribes who mostly inhabited the Gangetic Valley.