Ascertainment of Profit under the Single Entry System!

No Trading and Profit and Loss Account can be prepared. Profit, therefore, under the Single Entry System can be ascertained only by comparing capital at the end of the trading period with that in the beginning. Suppose, A finds that his capital on March 31, 2012 was Rs 1, 16,000, whereas it was Rs 80,000 on April 1, 2011, it is safe to conclude that there was a profit of Rs 36,000 during the year—otherwise how could the capital of Rs 80,000 (in the beginning of the year) grow to Rs 1, 16,000 at the end of the year? This is true but for two things.

Hence, to ascertain profit under the Single Entry System:

Capital at any time is found out by deducting liabilities from assets following the accounting equation:

One has, therefore, to prepare a “balance sheet” which, in Single Entry, is called Statement of Affairs. The various assets and liabilities will be estimated as best as one can.

This is illustrated below:

Mr. Z owns a general store in Delhi and does not maintain his accounts on double entry system.

His assets and liabilities on 1st April, 2011 were as follows:

Ascertain the amount of profit earned by the trader for the year ended 31st March, 2010 after making the following adjustments:

(a) Write off Rs 4,000 as bad debts and make a provision for doubtful debts @ 5% on the remaining debtors.
(b) Provide for full year depreciation on Machine @ 8% per annum and on Motor Cycle @ 10% per annum on diminishing balance method. 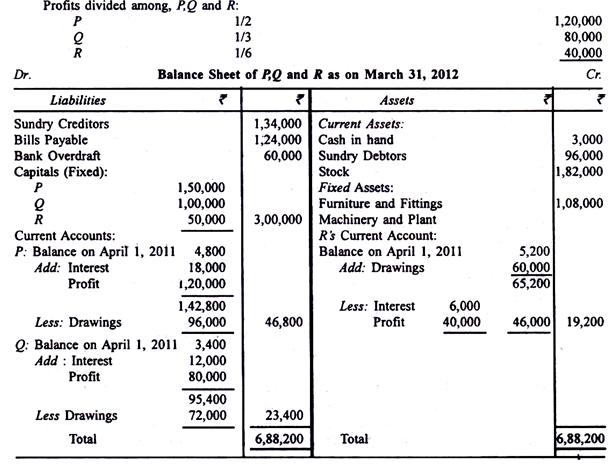