Suppose an object is in motion, the position of that object changes with time. But how fast is the position changing with time and in what direction? To understand this, we define average velocity and average speed. 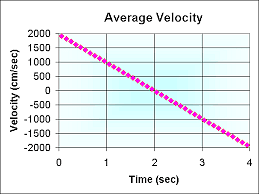 The velocity of a particle is:

The total distance travelled by the body in total time is the average speed.Average speed = Total Displacement / Total TimeIt is a scalar quantity and its units are m/s.

Let’s carry out a small activity. You are walking towards theatre from home. Suddenly you realize that you are running late and would probably miss the beginning. You start running pretty fast. Maybe it’s been a while since the last time you ran and you slow down a bit. This is ‘instantaneous speed’.  And if you include the direction with that speed then you get the instantaneous velocity.

The rate of change of displacement of an object in a particular direction is its velocity. Its S.I unit is meter per second. 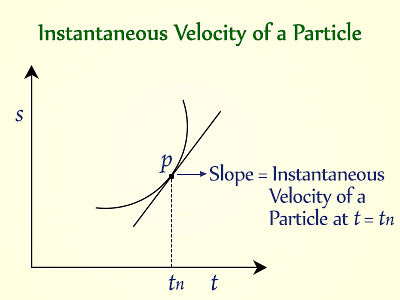 The average velocity tells us how fast an object has been moving over a given time interval but does not tell us how fast it moves at different instants of time during that interval. For this, we define instantaneous speed. It is the rate of change of distance with respect to time.

Q. Which of the following sentences is an example of instantaneous velocity?(i) The car covered 500 kilometers first 10 hours of its northward journey.(ii) Five seconds into launch, the rocket was shooting upward at 5000 meters per second.(iii) The Cheetah can run at 70 miles per hour.(iv) Moving at 5 kilometres per hour, it will take us eight hours to get to the base.(v) Roger Bannister was the first person to run one mile in less than four minutes.Ans: b