Single stage BJT & MOSFET Amplifiers study notes for Electronics and communicationIn this article, you will find the Single Stage BJT Amplifiers which will cover the topics such as Concept of BJT Amplifier, Transistor as an amplifier, Small signal variations, Transconductance, BJT and Pi-Hybrid model and small signal parameters.

➤ Small-Signal variationsConsider the BJT circuit shown in figure 1. Various small signal parameters for the circuit is described below. 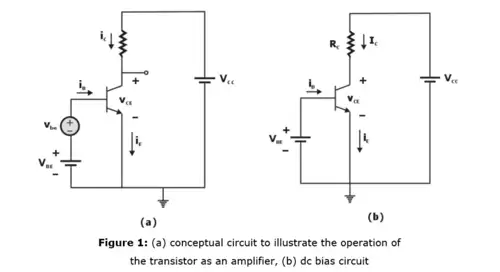 Thus, the instantaneous collector current is composed of the dc bias value IC and a signal component iC. So, signal current in the collector is:ic = (IC/VT)vbeIt can be rewritten asic = gmVbewhere gm = IC/VT is called the transconductance.

(ii) Base Current and input Resistance at the BaseTo determine the resistance seen by vbe, first evaluate the total base current iB using equation (V) as follows 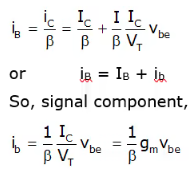 The small signal input resistance between base and emitter, looking into the base, is denoted by rπ and is defined as

If we denote the small signal resistance between base and emitter, looking into the emitter, by re, it can be defined as 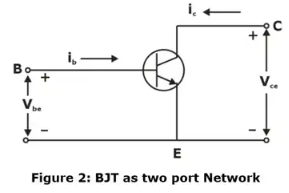 A bipolar junction transistor can be treated as a two-port network as shown in figure 2. Small time-varying signals is superimposed at Q-point. Since the sinusoidal signals are small, the slope at Q-point is treated as constant, which has the units of conductance. The inverse of this conductance is the small-signal resistance defined as rπ. The small-signal input base current is related to the small-signal input voltage byvbe = ib rπ where 1/rπ is equal to the slope of the iB – vBE curve. rπ can be found as given below, 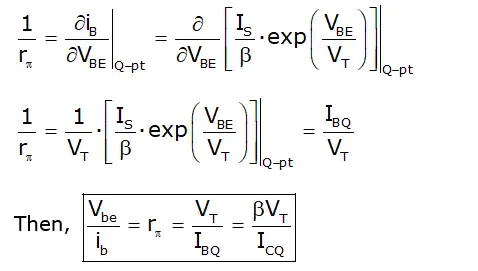 (Note: The resistance rπ is called diffusion resistance or base-emitter input resistance. rπ is a function of Q-point parameters.)While considering the output characteristics of bipolar transistor. Initially consider the case in which the output collector current is independent of the collector-emitter voltage, then the collector current is a function only of the base-emitter voltage. Then it can be written as,

Then term IS exp (VBE/VT) evaluated at Q-point is just the quiescent collector current. The term ICQ/VT is conductance. Since this conductance relates a current in the collector to a voltage in the B-E circuit, the parameter is called transconductance and is written as 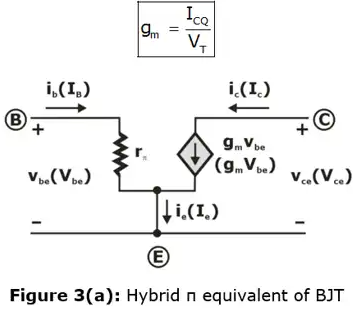 Using these new parameters, a new simplified small-signal hybrid-π equivalent circuit can be developed for npn transistor, as shown in Figure 3(a).The small-signal collector current is related to the small-signal base current as 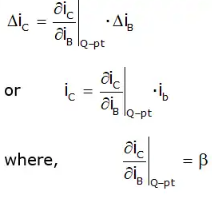 and is called an incremental or ac common-emitter current gain.It can be written as, 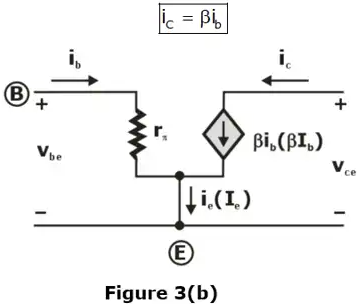 The small-signal equivalent circuit of bipolar transistor in Figure 3(b) uses this parameter.Note: If rπ and gm is multiplied, then

➤ Methodology to Analyse a BJT Amplifier:In linear amplifier circuits, superposition theorem is applicable, means the ac and dc analysis can be performed separately. The analysis of the BJT amplifier proceeds as follow:Step 1: Determine the dc operating point of the BJT and in particular the dc collector current Ic.Step 2: Calculate the values of the small signal model parameter,gm = IC/VT, rπ = β/gmStep 3: Eliminate the dc sources by replacing each dc current source with an open circuit.Step 4: Replace the BJT with one of its small signal equivalent circuit models. Although any one of the models can be used, one might be more convenient than the other for the particular circuit being analysed.Step 5: Analyse the resulting circuit to determine the required quantities (eg. Voltage gain, input resistance etc.). 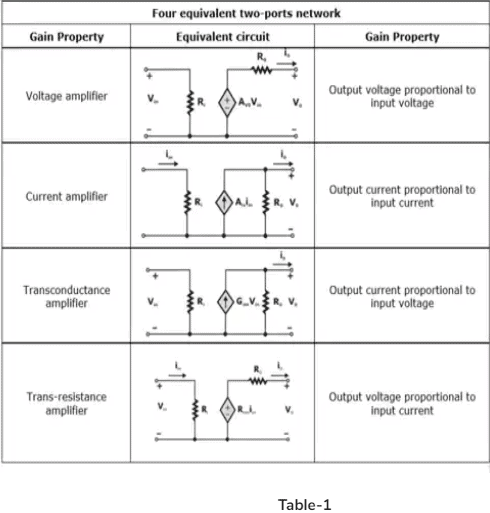 ➤ Frequency Response of Common Emitter Amplifier:In common emitter amplifier circuit of figure 4(a) , it was assumed that the coupling capacitors Cc1 and Cc2 and the bypass capacitor CE were acting as perfect short circuits at the signal frequencies of interest, also there is neglected the internal capacitances of the BJT that is, Cπ and Cμ of the BJT high frequency model. It was assumed to be sufficiently small to act as open circuit at all signal frequency of interest. So, it is observed that the gain is almost constant over a wide frequency band, called the mid-band. 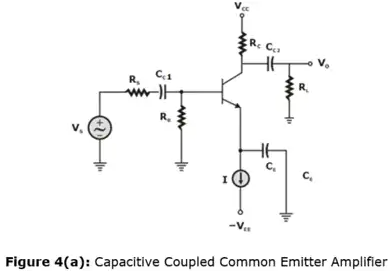 Figure 4(b) shows that the gain fall off at signal frequencies below and above the mid-band. The gain fall-off in the low frequency band is due to the fact that even though CC1, CC2 and CE are large capacitance, as the signal frequency is reduced their impedance increase and they no longer behave as short circuit. On the other hand, the gain falloff in the high frequency band as result of Cgs and Cgd, which though very small, their impedance at sufficiently high frequency decrease, thus they can no longer be considered as open circuits.

(i) Cut-off FrequencyFor a given circuit with equivalent resistance (Req) and equivalent capacitance (Ceq), the 3-dB cut-off frequency is given by

Thus, we calculate 3 dB frequencies due to CC1, CC2, CE as below.