Generally rotating and reciprocating machinery produces unbalance force due to inertia forces of the moving masses.Balancing is the process of designing or modifying machinery so that the unbalance is reduced to an acceptable level and if possible, is eliminated entirely.

Many times, one or several masses are rotating in a single plane. The examples of such cases are: steam turbine rotors, impellers of centrifugal pumps, impellers of hydraulic turbines, etc

During the rotation of shaft, a dynamic force (centrifugal force) equal to mrω2 acts in a radially outward direction as shown in the above figure.This unbalanced force results in increase in load on the bearings, increased bending moment on the shaft and vibrations of the system.This dynamic force can be balanced by either of the following two methods.

If the combined mass centre of the system lies on the rotational axis then it is called as in static balance.Consider masses attached in the same plane. Due to rotation, unbalanced force is mrω2 in each mass 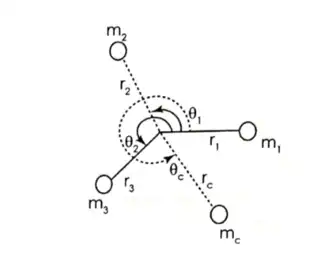 Total unbalance forceF = m1r1ω2 + m2r2ω2 + m3r3ω2 Here all forces are in same plane. Place another mass mc at rc with θc angle with respect to m1, such that resultant force becomes zero.⇒ F + mcrcω2 = 0⇒ ∑mrω2 + mcrcω2 = 0⇒ ∑mr + mcrc = 0The above equation can be solved either mathematically or graphically. 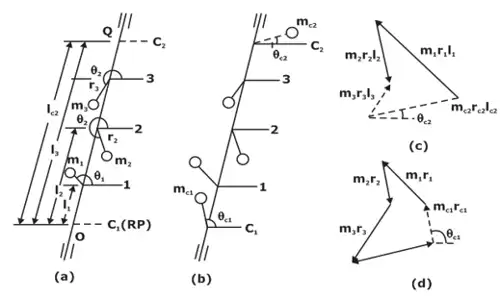 Inertia force produced due to this acceleration,

Here FP = mrω2cosθ is primary unbalanced force acting along line of a stroke of the cylinder. It is due to SHM of parts. Maximum value of the primary force mrω2.Here

FS is secondary unbalanced force also acting along line of a stroke of the cylinder. It is due to obliquity of arrangement.

Partial balancingTo minimize the effect of the unbalanced force, a compromise is, usually, made i.e. 2/3 of the reciprocating mass is balanced (or a value between one-half and three quarters). If c is fraction of the reciprocating mass that balanced, thenPrimary force balanced by the mass = cmrω2cosθPrimary force unbalanced by the mass = (1 – c)cmrω2cosθUnbalanced vertical force component = cmrω2sinθResultant unbalanced force at any instant R

Effect of Partial Balancing of Locomotives

In partial balancing of reciprocating engine there are two unbalanced forces acting on engine.

The unbalanced force perpendicular to line of stroke produces the variation of pressure on the rails which causes hammering action on the rails which is called as hammer blow.We know that unbalanced force along the perpendicular to the line of stroke due to balancing mass mb at radius rb is mbω2rb sin θ. This force is maximum when sinθ is unity i.e., when θ = 90° or 270°, Therefore FVU(max) = mbω2rb.