Page No 15.36:Question 26:On 31st December, 2014 the Cash Book of Gopal showed debit balance of ₹ 12,000. On comparing the Cash Book with the Pass Book, the following discrepancies were noted:-(a) Cheques were issued for ₹ 15,000, but of them cheques for ₹ 7,700 have not yet been presented.(b) Cheques for ₹ 8,000 were deposited in bank but of these cheques for ₹ 2,000 were not recorded in the Cash Book.(c) Cheques deposited in bank but not credited ₹ 3,800.(d) A cheque for ₹ 350 was paid into bank but bank credited the amount with ₹ 530 by mistake.(e) Bank received interest on debentures on behalf of Gopal amounting to ₹ 300.(f) It was also found that the total of one page on the payment side of the Cash Book was ₹ 4,520 but it was written on the next page as ₹ 5,420.Prepare a Bank Reconciliation Statement.ANSWER: 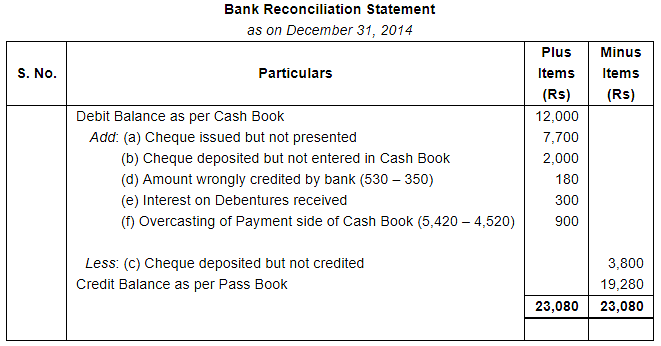 Page No 15.37:Question 27:On checking the Bank Pass Book it was found that it showed an overdraft of ₹ 5,220 as on 31.12.2014, while as per Ledger it was different to Bank Debit. The following differences were noted:(i) Cheques deposited but not yet credited by bank ₹ 6,000.(ii) Cheques dishonoured and debited by bank but not given effect to it in the Ledger ₹ 800.(iii) Bank charges debited by bank but Debit Memo not received from bank ₹ 50.(iv) Interest on overdraft excess credited in the Ledger ₹ 200.(v) Wrongly credited by bank to account, deposit of some other party ₹ 900.(vi) Cheques issued but not presented for payment ₹ 400.ANSWER:

Page No 15.37:Question 28:Following information has been given by Rajendra. Prepare a Bank ReconciliationStatement as on 31st Dec. 2016, showing balance as per cash book:(i) Debit balance shown by the pass book ₹ 17,800.(ii) Cheques of ₹ 21,600 were issued in the last week of December, but of these ₹ 14,800 only were presented for payment.(iii) Cheques of ₹ 10,750 were deposited in bank, out of  them a cheque of ₹ 4,200 was credited in the first week of January, 2017.(iv) A cheque of ₹ 1,200 was debited in the cash book but was not deposited in bank.(v) Insurance premium paid by bank ₹ 1,450.(vi) A bill of exchange for ₹ 6,200 which was discounted with bank, returned dishonoured but no entry was made in the cash book.(vii) Bank charges and interest charged by bank are ₹ 350.ANSWER: 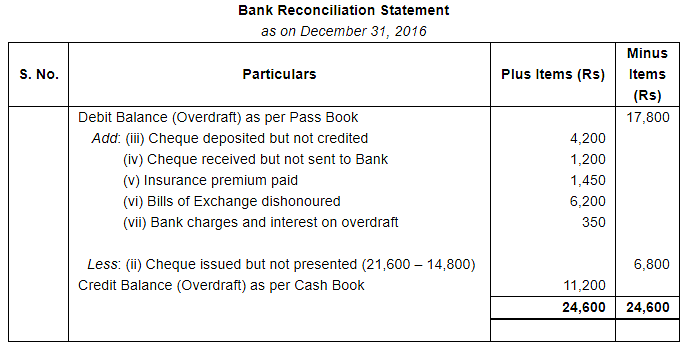 Question 29:From the following particulars prepare a bank reconciliation statement of Govil as on 31st December, 2014.

Balance as per Pass Book on 31st December 2014 is ₹ 8,500. Cheques for ₹ 5,100 were issued during the month of December but of these cheques for ₹ 1,200 were presented in the month of January 2015 and one cheque for ₹ 200 was not presented for payment. Cheques and cash amounting to ₹ 4,800 were deposited in bank during December but credit was given for ₹ 3,800 only. A customer has deposited ₹ 800 into bank directly. The bank credited the merchant for ₹ 200 as interest and has debited him for ₹ 30 as bank charges for which there are no corresponding entries in Cash Book.ANSWER: 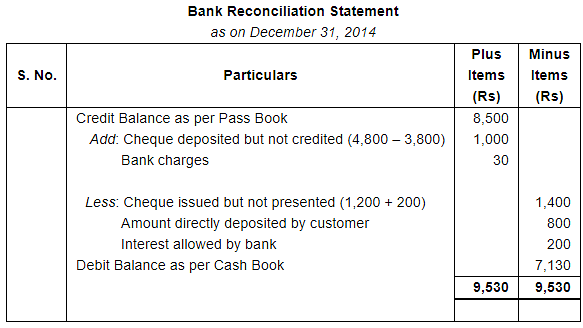 Page No 15.38:
Question 31:
On 31st March 2015 your bank Pass Book showed a balance of ₹ 6,000 to your credit. Before that date you had issued cheques amounting to ₹ 1,500 of which cheques worth ₹ 900 only have been presented. You also deposited cheques worth ₹ 2,000 of which cheque of ₹ 800 paid by you into bank on 29th March is not yet credited in Pass Book. You had also received a cheque for ₹ 160 which although entered by you in the bank column of the Cash Book, was omitted to be paid into the bank. On 31st March a cheque of ₹ 250 received by you was paid into the bank but the same was omitted to be entered in the cash book. There was a credit of ₹ 85 for interest on current account and debit of ₹ 10 for bank charges. Draw up a Reconciliation Statement showing adjustment between your Cash Book and pass book.
ANSWER: 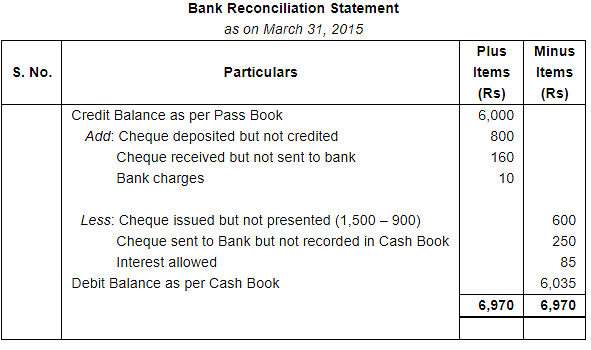 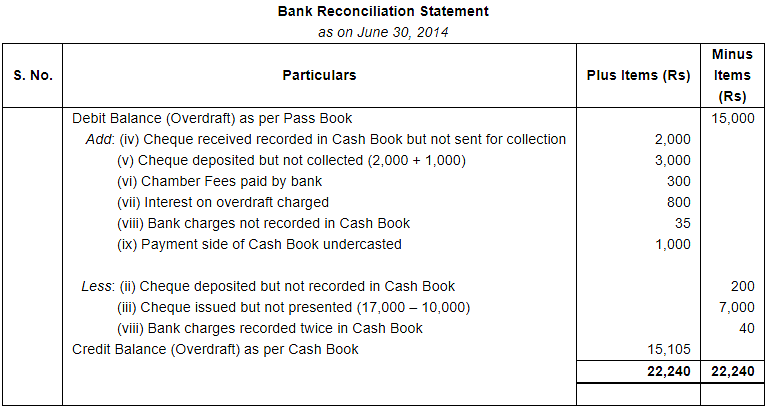 Question 33:
Prepare a Bank Reconciliation Statement as on 31st March 2015 from the following informations: 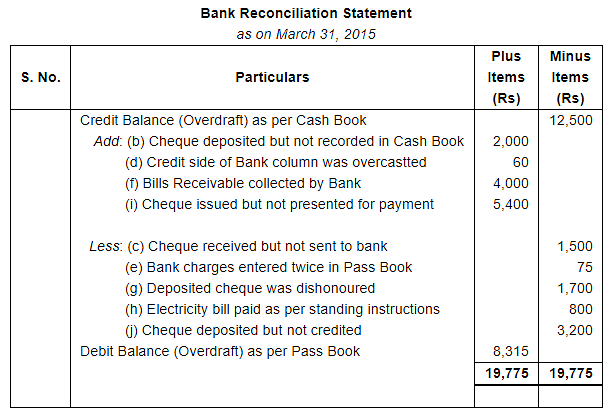 Note: Transaction no. (iii) will have no effect on the bank balance as the cheque was recorded in the cash column and was not banked till the date of preparation of Bank Reconciliation Statement.