Question 16: On 31st March, 2019, Cash Book of a merchant showed bank overdraft of ₹ 1,72,985. On comparing the Cash Book with Bank Statement, following discrepancies were noted:(i) Cheques issued for ₹ 60,000 were not presented in the bank till 7th April, 2019.(ii) Cheques amounting to ₹ 75,000 were deposited in the bank but were not collected.(iii) A Cheque of ₹ 15,000 received from Mahesh Chand and deposited in the bank was dishonoured but the non-payment advice was not received from the bank till 1st April, 2019.(iv) ₹ 1,50,000 being the proceeds of a bill receivable collected appeared in the Pass Book but not in the Cash Book.(v) Bank charges ₹ 1,500 and interest on overdraft ₹ 8,500 appeared in the Pass Book but not in the Cash Book.(vi) Overdraft balance as per Cash Book of ₹ 500 on 28th February, 2019 was wrongly carried forward as debit balance. The error was noted at the time of preparing the Bank Reconciliation Statement as on 31st March, 2019.
Prepare Bank Reconciliation Statement.ANSWER: 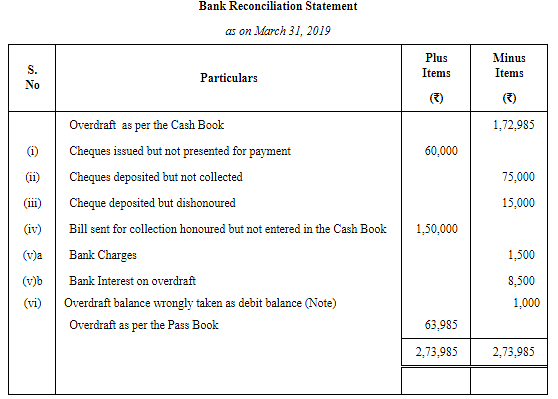 Note: Overdraft balance has credit balance but taken as debit balance, so to correct the error credit cash book by double amount.Therefore, 1,000 should be shown in the minus side.

Question 17: Prepare Bank Reconciliation Statement from the following:
On 31st March, 2019, a merchant's Cash Book showed a credit bank balance of ₹ 10,500 but due to the following reasons the Pass Book showed a difference(i) A cheque of ₹ 540 issued to Mohan has not been presented for payment.(ii) A post-dated cheque for ₹ 100 has been debited in the bank column of the Cash Book but under no circumstances was it possible to present it.(iii) Four cheque of ₹ 1,200 sent to the bank have not been collected so far. A cheque of ₹ 400 deposited in the bank has been dishonoured.(iv) As per instructions, the bank paid ₹ 50 as Fire Insurance premium but the entry has not been made in the Cash Book.(v) There was a debit in the Pass Book of ₹ 15 in respect of bank charges and a credit of ₹ 25 for interest on Current Account but no record exists in the Cash Book.(vi) Cheque of ₹ 5,000 dated 15th April, 2019 issued to M & Co. was dishonoured being post dated. It was also not recorded in the books of account yet.ANSWER: 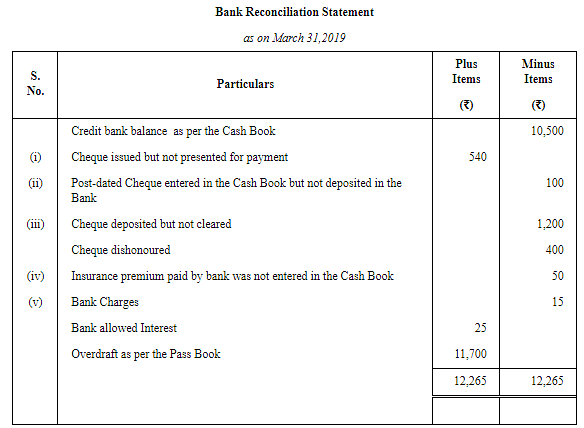 Question 18: From the following particulars of a trader, prepare a Bank Reconcilation Statement as on 31st March, 2019.(i) Bank overdraft as per Cash Book ₹ 52,100.(ii) During the month, the total amount of cheques for ₹ 94,400 were deposited into the bank but of these, one cheque for ₹ 11,160 has been entered into the Pass Book on 5th April.(iii) During the month, cheques for ₹ 89,580 were drawn in favour of creditors. Of them, one creditor for ₹ 38,580 encashed his cheque on 7th April whereas another for ₹ 4,320 have not yet been encashed.(iv) As per instructions the bank on 28th March paid out ₹ 10,500 to a creditor but by mistake, the same has not been entered in the Cash Book.(v) According to agreement, on 25th March, a debtor deposited directly into the bank ₹ 9,000 but the same has not been recorded in the Cash Book.(vi) In the month of March, the bank without any intimation, debited his account for ₹ 120 as bank charges and credited the same for ₹ 180 as interest.(vii) Cash deposit of ₹ 5,780 in bank was recorded as ₹ 7,580. The error was rectified by the Bank before 31st March, 2019.ANSWER: 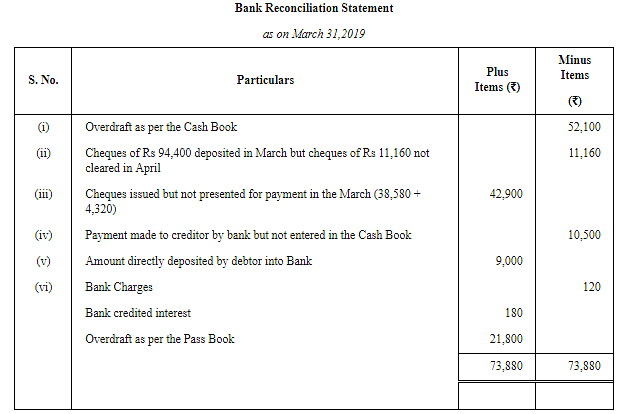 Note: Point (vii) will have no affect on the statement as error in recording cash deposit entry is already rectified. 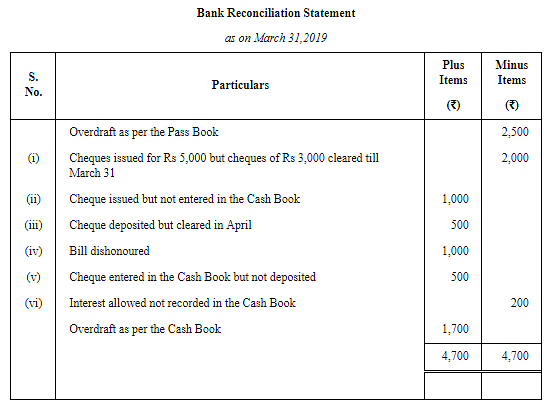 Question 20: From the following information, prepare Bank Reconciliation Statement as on 31st March, 2019: 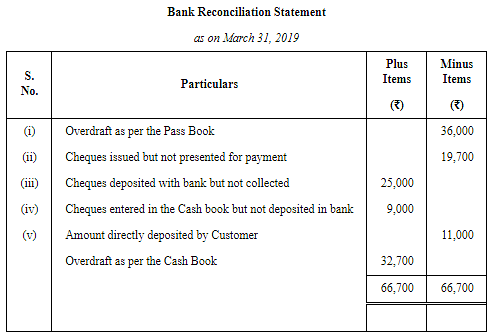