Here when we compare Cash Book and Pass Book we find out following 2 entries remain unticked in pass book i.e. they don’t appear in cash book:

However if we difference between closing balances of two books is only ₹2,000 but at the same time there is a difference of ₹30,000 in opening balances. Thus we need to bifurcate the unticked items as:

6. METHODS OF BANK RECONCILIATION:-There are following two methods of reconciling the bank balances:6.1 Bank Reconciliation Statement without Preparation of adjusted Cash-BookFor reconciliation purposes students can take any of the four balances as the starting point and can proceed further with the causes of differences.Based on the earlier explanation the following table has been prepared for student’s ready reference when reconciliation is done on the basis of ‘Balance’ presentation. The final balance, which will come after addition and subtraction, will be the balance as per the other book. 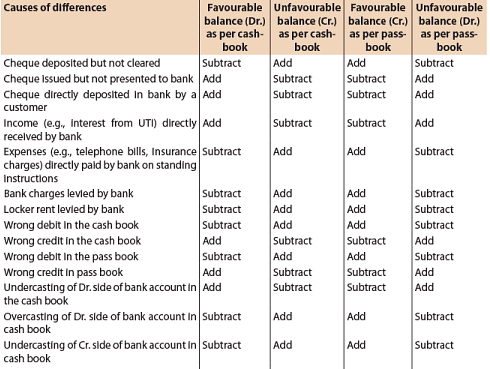 It is proper to prepare a neat statement showing the reconciliation of the two balances. Taking the example given in the illustration 1, the statement may be prepared as follows:1. ‘Balance’ presentation.2. ‘Plus & Minus’ presentation.1. As per Balance Presentation: 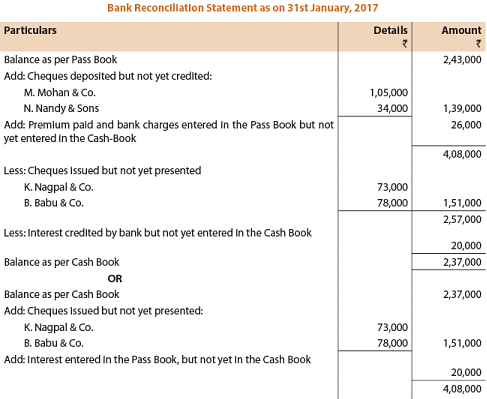 2. As per Plus-Minus Presentation:

ILLUSTRATION 3:- On 31st March 2017, the Bank Pass Book of Namrata showed a balance of  ₹1,50,000 to her credit while balance as per cash book was ₹1,12,050. On scrutiny of the two books, she ascertained the following causes of difference:i)  She has issued cheques amounting to ₹80,000 out of which only ₹32,000 were presented for payment.ii)  She received a cheque of ₹5,000 which she recorded in her cash book but forgot to deposit in the bank.iii)  A cheque of ₹22,000 deposited by her has not been cleared yet.iv)  Mr. Gupta deposited an amount of ₹15,700 in her bank which has not been recorded by her in Cash Book yet.v)  Bank has credit an interest of ₹1,500 while charging ₹250 as bank charges.Prepare a bank reconciliation statementSOLUTION:-

The above illustration can also be presented with the column for “Plus” and “Minus.”

ILLUSTRATION 7: From the following information, prepare a Bank reconciliation statement as at 31st December, 2017 for Messrs New Steel Limited:-

If the books are to be closed on 31st December,  then adjusted cash book will be prepared as given below:

ILLUSTRATION 10:- When Nikki & Co. received a Bank Statement showing a favourable balance of ₹10,39,200 for the period ended on 30th June, 2017, this did not agree with the balance in the cash book.An examination of the Cash Book and Bank Statement disclosed the following :1. A deposit of ₹3,09,200 paid on 29th June, 2017 had not been credited by the Bank until 1st July, 2017.2. On 30th March, 2017 the company had entered into hire purchase agreement to pay by bank order a sum of ₹3,00,000 on the 10th of each month, commencing from April, 2017. No entries had been made in Cash Book.3. A customer of the firm, who received a cash discount of 4% on his account of ₹4,00,000 paid the firm a cheque on 12th June. The cashier erroneously entered the gross amount in the bank column of the Cash Book.4. Bank charges amounting to ₹3,000 had not been entered in Cash-Book.5. On 28th June, a customer of the company directly deposited the amount in the bank ₹ 4,00,000, but no entry had been made in the Cash Book.6. ₹11,200 paid into the bank had been entered twice in the Cash Book.7. A debit of ₹11,00,000 appeared in the Bank Statement for an unpaid cheque, which had been returned marked ‘out of date’. The cheque had been re-dated by the customer and paid into Bank again on 5th July, 2017.Prepare Bank Reconciliation Statement on 30 June, 2017.SOLUTION:-