The document Basics of Mechanics Mechanical Engineering Notes | EduRev is a part of the GATE Course Engineering Mechanics.
All you need of GATE at this link: GATE 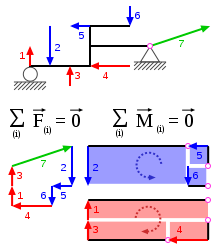 Try yourself:In Theory of machines ____ deals with various forces when the body is stationary.
View Solution

Try yourself:______ is the study to know the displacement, velocity and acceleration of a part of the machine.
Explanation

Kinematics is the study where we calculate the displacement, velocity, and acceleration of a given body.