In basic communications, there are two types of communication one is analog and another is digital. But in advanced communication, we will discuss the communication through radar, satellite etc. Mostly they are developed for of military purpose or security purpose.A radar consists of a transmitter and receiver, each connected to a directional antenna. The transmitter radiates or transmits electromagnetic radiations generated by a magnetron oscillator. The receiver antenna, collects the returned echo signal and delivers it to the receiver where it is processed to detect the presence of the target and to extract its relative velocity with respect to radar station if the target is moving. 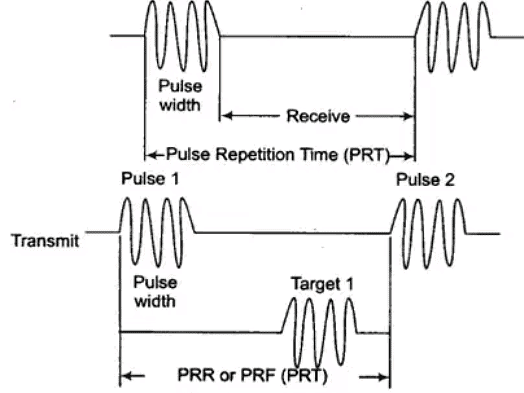 Pulse Reception Frequency (PRF) or Pulse Repetition rate (PRR) is number of pulses per unit time. These pulses are transmitted by a highly directional parabolic antenna at the target, which can reflect (echo) some of the energy back to the same antenna. The reflected energy is received and time measurements are made, to determine the distance of the target.After the radar pulse has been transmitted, a sufficient rest time must be allowed for echo to return so as not to interfere with next transmit pulse. Time difference between two successive pulses is called as Pulse Repetition Time (PRT).

PRT Determination Formula: Pulse repetition time determines the maximum distance to the target to be measured, that is rangeRange = Δt/12.36 mileswhere Δt is the time from transmitter to receiver in microseconds.For higher accuracy and shorter ranges

where PW is Pulse-Width in μs.

Maximum Range (Rmax): Maximum radar range is the distance beyond which the target cannot be detected. It occurs when the received echo signal power pr just equals the minimum detectable signal (Smin).

Effect of Noise on Maximum Range: Noise affects the maximum range in so far, as it determines the minimum power that the receiver can handle.

Blind Speed: If the target has uniform velocity, the successive sweeps will have Doppler phase shifts of exactly 2π and the target appears stationary and gives wrong radar indication. The speed corresponding to this condition is called blind speed.

Doppler Effect: If the observer is moving with respect to source, he observes change in frequency of the wave emitted by source, this is called as Doppler effect or Doppler shift.Observed frequency f is given by

anddoppler shift|Δf| = vsr/λwhere, vsr = vs – vr is the relative velocity source with respect to receiver.f0 is frequency of wave radiated by source.In radar technology, Doppler effect is using for the following tasks