Semiconductor based electronics is the foundation to the information technology society we live in today. Ever since the first transistor was invented way back in 1948, the semiconductor industry has been growing at a tremendous pace. Semiconductor memories and microprocessors are two major fields, which are benefited by the growth in semiconductor technology. The technological advancement has improved performance as well as packing density of these devices over the years Gordon Moore made his famous observation in 1965, just four years after the first planar integrated circuit was discovered. He observed an exponential growth in the number of transistors per integrated circuit in which the number of transistors nearly doubled every couple of years. This observation, popularly known as Moore's Law, has been maintained and still holds true today. Keeping up with this law, the semiconductor memory capacity also increases by a factor of two every year.

Based on their functionalities, memory can be broadly classified into Read/Write memories and Read-only memories. As the name suggests, Read/Write memory offers both read and write operations and hence is more flexible. SRAM (Static RAM) and DRAM (Dynamic RAM) come under this category. A Read-only memory on the other hand encodes the information into the circuit topology. Since the topology is hard-wired, the data cannot be modified; it can only be read. However, ROM structures belong to the class of the nonvolatile memories. Removal of the supply voltage does not result in a loss of the stored data. Examples of such structures include PROMs, ROMs and PLDs. The most recent entry in the filed are memory modules that can be classified as nonvolatile, yet offer both read and write functionality. Typically, their write operation takes substantially longer time than the read operation. An EPROM, EEPROM and Flash memory fall under this category. 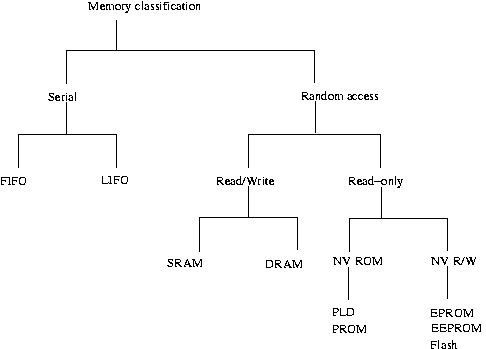 The straightforward way of implementing a N-word memory is to stack the words in a linear fashion and select one word at a time for reading or writing operation by means of a select bit. Only one such select signal can be high at a time. Though this approach as shown in Fig 27.31 is quite simple, one runs into a number of problems when trying to use it for larger memories. The number of interface pins in the memory module varies linearly with the size of the memory and this can easily run into huge values. To overcome this problem, the address provided to the memory module is generally encoded as shown in Fig 27.32. A decoder is used internally to decode this address and make the appropriate select line high. With 'k' address pins, 2k number of select pins can be driven and hence the number of interface pins will get reduced by a factor of 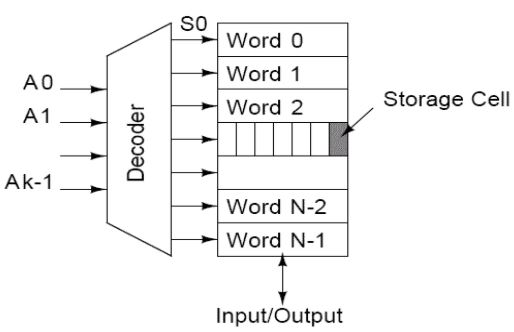 Though this approach resolves the select problem, it does not address the issues of the memory aspect ratio. For an N-word memory, with a word length of M, the aspect ratio will be nearly N:M, which is very difficult to implement for large values of N. Also such sort of a design slows down the circuit very much. This is because, the vertical wires connecting the storage cells to the inputs/outputs become excessively long. To address this problem, memory arrays are organized so that the vertical and horizontal dimensions are of the same order of magnitude, making the aspect ratio close to unity. To route the correct word to the input/output terminals, an extra circuit called column decoder is needed. The address word is partitioned into column address (A0to AK-1) and row address (AK-1 to AL-1). The row address enables one row of the memory for read/write, while the column address picks one particular word from the selected row. 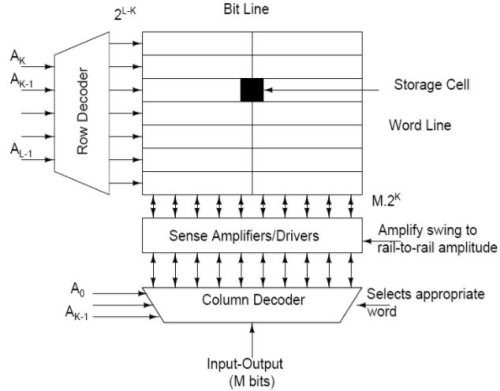 RAMs are of two types, static and dynamic. Circuits similar to basic D flip-flop are used to construct static RAMs (SRAMs) internally. A typical SRAM cell consists of six transistors which are connected in such a way as to form a regenerative feedback. In contrast to DRAM, the information stored is stable and does not require clocking or refresh cycles to sustain it. Compared to DRAMs, SRAMs are much faster having typical access times in the order of a few nanoseconds. Hence SRAMs are used as level 2 cache memory.

Dynamic RAMs do not use flip-flops, but instead are an array of cells, each containing a transistor and a tiny capacitor. '0's and '1's can be stored by charging or discharging the capacitors. The electric charge tends to leak out and hence each bit in a DRAM must be refreshed every few milliseconds to prevent loss of data. This requires external logic to take care of refreshing which makes interfacing of DRAMs more complex than SRAMs. This disadvantage is compensated by their larger capacities. A high packing density is achieved since DRAMs require only one transistor and one capacitor per bit. This makes them ideal to build main memories. But DRAMs are slower having delays in the order tens of nanoseconds. Thus the combination of static RAM cache and a dynamic RAM main memory attempts to combine the good properties of each.