The document Basis of Classification Class 9 Notes | EduRev is a part of the Class 9 Course Science Class 9.
All you need of Class 9 at this link: Class 9

Biodiversity refers to all the diverse plants, animals and micro organisms present on earth.

Biological diversity or biodiversity is the occurrence of diverse or varied forms of living beings which differ from one another in external appearance, size, colour pattern, internal structure, nutrition, behaviour, habitat, etc.

They range in size from microscopic bacteria, hardly a few micrometers in size, to Blue Whale (about 30 m in length) and Redwood trees (Sequoia) of California (about 100 m in height). Similarly some pine trees (e.g. Pinus) live for thousands of years while many insects like mosquitoes have a life span of a few days.

There are transparent jelly fishes and worms on one hand to brightly coloured birds and flowers on the other hand. It is estimated that there are at least 10 million different species of plants and animals living today, but only 1.7 million have been described so far worldwide. 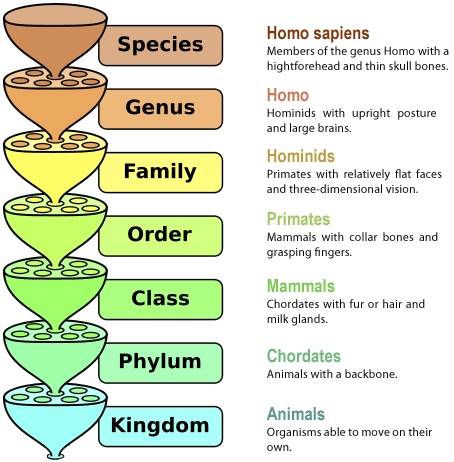 There are 12 megadiversitycentres in the world, which are rich in biodiversity.

Classification is the arrangement of organisms into groups and subgroups on the basis of their similarities and dissimilarities.

Taxonomy:  The science dealing with identification, nomenclature and classification of organisms is called taxonomy systematics Term "Taxonomy" was given  by - > A.P. de Candolle

The bewildering variety of life around us has evolved on earth. In order to make relevant groups to study, variety of life forms, we classify organism.Classification makes the study of different type of organisms easy and systematic.

From classification, we can know all life forms together and as a whole.

Classification reveals the inter-relationship among organisms.

It helps in understanding the other branches of life sciences.