The document Bessel's Special Function (Part - 4) - Mathematical Methods of Physics, UGC - NET Physics Physics Notes | EduRev is a part of the Physics Course Physics for IIT JAM, UGC - NET, CSIR NET.
All you need of Physics at this link: Physics

Frequently in physical problems there is a need to know how a given Bessel or modiﬁed Bessel function behaves for large values of the argument, that is, the asymptotic behavior.This is one occasion when computers are not very helpful. One possible approach is to develop a power-series solution of the differential equation, but now using negative powers. This is Stokes’ method. The limitation is that starting from some positive value of the argument (for convergence of the series), we do not know what mixture of solutions or multiple of a given solution we have. The problem is to relate the asymptotic series (useful for large values of the variable) to the power-series or related deﬁnition (useful for small values of the variable). This relationship can be established by introducing a suitable integral representation and then using either the method of steepest descent,  or the direct expansion as developed in this section.

Expansion of an Integral Representation

As a direct approach, consider the integral representation.

2. To show that the regular solution Iν is absent.

1. The fact that Eq. (11.122) is a solution of the modiﬁed Bessel equation may be veriﬁed by direct substitution. We obtain

which transforms the combined integrand into the derivative of a function that vanishes at both endpoints. Hence the integral is some linear combination of Iν and Kν .

2. The rejection of the possibility that this solution contains Iν constitutes.

taking out t 2 /z2 as a factor. This substitution has changed the limits of integration to a more convenient range and has isolated the negative exponential dependence e−z . The integral in Eq. (11.123b) may be evaluated for z = 0 to yield (2ν − 1)!. Then, using the duplication formula , we have

2. The second Hankel function is just the complex conjugate of the ﬁrst (for real argument),

An alternate derivation of the asymptotic behavior of the Hankel functions appears in Section 7.3 as an application of the method of steepest descents.

4. The Neumann function is the imaginary part of Hν(1) (z) for real z,or

Initially, this relation is established for real z, but it may be extended to the complex domain as shown.

5. Finally, the regular hyperbolic or modiﬁed Bessel function Iν (z) is given by This completes our determination of the asymptotic expansions. However, it is perhaps worth noting the primary characteristics. Apart from the ubiquitous z−1/2 , Jν and Nν behave as cosine and sine, respectively. The zeros are almost evenly spaced at intervals of π ; the spacing becomes exactly π in the limit as z →∞. The Hankel functions have been deﬁned to behave like the imaginary exponentials, and the modiﬁed Bessel functions Iν and Kν go into the positive and negative exponentials. This asymptotic behavior may be sufﬁcient to eliminate immediately one of these functions as a solution for a physical problem. We should also note that the asymptotic series Pν (z) and Qν (z), Eqs. (11.129a) and (11.129b), terminate for ν =�1/2, �3/2,... and become polynomials (in negative powers of z). For these special values of ν the asymptotic approximations become exact solutions.It is of some interest to consider the accuracy of the asymptotic forms, taking just the ﬁrst term, for example (Fig. 11.11),

Clearly, the condition for the validity of Eq. (11.137) is that the sine term be negligible; that is,

For n or ν> 1 the asymptotic region may be far out.

As pointed out in Section 11.3, the asymptotic forms may be used to evaluate the various Wronskian formulas .

When the Helmholtz equation is separated in spherical coordinates, the radial equation has the form

This is Eq. (9.65) of Section 9.3. The parameter k enters from the original Helmholtz equation, while n(n + 1) is a separation constant. From the behavior of the polar angle function (Legendre’s equation, Sections 9.5 and 12.5), the separation constant must have this form, with n a nonnegative integer. Equation (11.139) has the virtue of being selfadjoint, but clearly it is not Bessel’s equation. However, if we substitute

which is Bessel’s equation. Z is a Bessel function of order

(n an integer). Because of the importance of spherical coordinates, this combination, that is,

It is convenient to label these functions spherical Bessel functions with the following deﬁning equations: 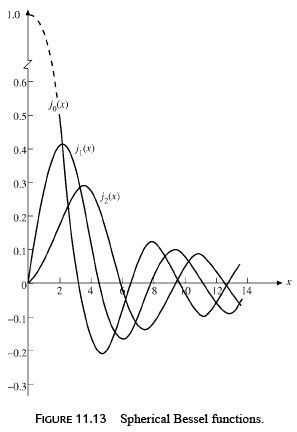 The Legendre duplication formula can be used again to give

Equations (11.148) and (11.149) suggest expressing all spherical Bessel functions as combinations of sine and cosine. The appropriate combinations can be developed from the power-series solutions, Eqs. (11.144) and (11.147), but this approach is awkward. Actually the trigonometric forms are already available as the asymptotic expansion of Section 11.6.From Eqs. (11.131) and (11.129a),

Now, Pn+1/2   and Qn+1/2 are polynomials. This means that Eq. (11.151) is mathematically exact, not simply an asymptotic approximation. We obtain

The transformation of factorials in the expressions for nn (x ) employs Exercise 8.1.3. The limiting values of the spherical Hankel functions go as �inn (x ).The asymptotic values of jn ,nn ,

may be obtained from the Bessel asymptotic forms, Section 11.6. We ﬁnd

The condition for these spherical Bessel forms is that x ≫ n(n + 1)/2. From these asymptotic values we see that jn (x ) and nn (x ) are appropriate for a description of standing spherical waves;

(x ) correspond to traveling spherical waves. If the time dependence for the traveling waves is taken to be e−iωt , then

and substitute in the expression for jn to obtain

Here αnp and αnq are roots of jn .This represents orthogonality with respect to the roots of the Bessel functions. An illustration of this sort of orthogonality is provided in Example 11.7.1, the problem of a particle in a sphere. Equation (11.169) guarantees orthogonality of the wave functions jn (r ) for ﬁxed n. (If n varies, the accompanying spherical harmonic will provide orthogonality.)

Example : PARTICLE IN A SPHERE

An illustration of the use of the spherical Bessel functions is provided by the problem of a quantum mechanical particle in a sphere of radius a . Quantum theory requires that the wave function ψ , describing our particle, satisfy

is Planck’s constant divided by 2π, m is the mass of our particle, and E is, its energy. Let us determine the minimum value of the energy for which our wave equation has an acceptable solution.Equation (11.170) is Helmholtz’s equation with a radial part :

We choose the orbital angular momentum index n = 0, for any angular dependence would raise the energy. The spherical Neumann function is rejected because of its divergent behavior at the origin. To satisfy the second boundary condition (for all angles), we require

where α is a root of j0 , that is, j0 (α) = 0. This has the effect of limiting the allowable energies to a certain discrete set, or, in other words, application of boundary condition (2) quantizes the energy E . The smallest α is the ﬁrst zero of j0 ,

which means that for any ﬁnite sphere the particle energy will have a positive minimum or zero-point energy. This is an illustration of the Heisenberg uncertainty principle for Δp with Δr ≤ a .In solid-state physics, astrophysics, and other areas of physics, we may wish to know how many different solutions (energy states) correspond to energies less than or equal to some ﬁxed energy E0 . For a cubic volume  the problem is fairly simple.

Another form, orthogonality with respect to the indices, may be written as