For the proper functioning of a linear FET amplifier, it is necessary to maintain the operating point Q stable in the central portion of the pinch off region. The Q point should be independent of device parameter variations and ambient temperature variations.

There are mainly two types of Biasing circuits

Self bias is a JFET biasing circuit that uses a source resistor to help reverse bias the JFET gate.

A  self bias circuit is shown in the fig 7.3 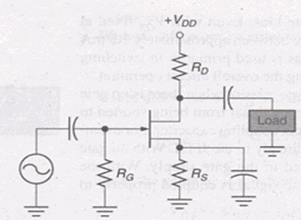 Self bias is the most common type of JFET bias. This JFET must be operated such that gate source junction is always reverse biased. This condition requires a negative VGS for an N-channel JFET and a positive VGS for P-channel JFET. This can be achieved using the self bias arrangement as shown in Fig 7.3. The gate resistor RG doesn’t affect the bias because it has essentially no voltage drop across it, and the gate remains at 0V. RG is necessary only to isolate an ac signal from ground in amplifier applications. The voltage drop across resistor RS makes gate source junction reverse biased.

DC analysis of self Bias:-

In the following DC analysis , the N-channel JFET shown in the fig7.4. is used for illustration.

For DC analysis, we can replace coupling capacitors by open circuits and we can also replace the resistor RG by a short circuit equivalent.

The relation between ID and VGS is given by- 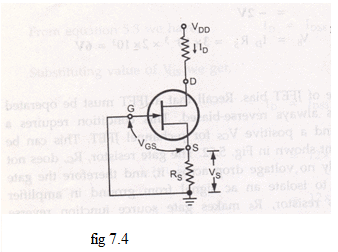 Substuting  this value in the above equation

For the N-chanel FET in the above figure

Is produces a voltage drop across Rs and makes the source positive w.r.t ground

Drawing the self bias line:-

Typical transfer characteristics for a self biased JFET are shown in the fig7.5.

The maximum drain current is 6mA and the gate source cut off voltage is -3V. This means the gate voltage has to be between 0 and -3V. 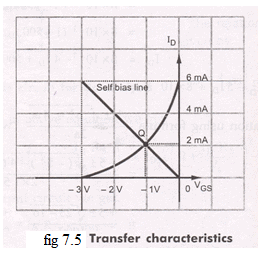 Now using the equation VGS = -IDRS and assuming RS of any suitable value we can draw the self bias line.

With this Rs , we can plot two points corresponding to ID = 0 and Id = IDSS

By plotting these two points, we can draw the straight line through the points. This line will intersect the transconductance curve and it is known as self bias line. The intersection point gives the operating point of the self bias JFET for the circuit.

At Q point , the ID is slightly  > than 2mA and VGS is slightly > -1V. The Q point for the self bias JFET depends on the value of Rs.If Rs is large, Q point far down on the transconductance curve ,ID is small, when Rs is small Q point is far up on the curve , ID is large. The gate voltage is set by resistors R1 and R2 as expressed by the following equation using the voltage divider formula. 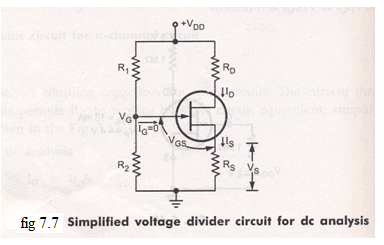 Applying KVL to the input circuit

Applying KVL to the input circuit we get

The Q point of a JFET amplifier , using the voltage divider bias is