Page No 18.62:Question 20:Journalise the following transaction in the books of Rajni:

Geeta's acceptance of ₹ 20,000 which had been discounted with the bank for ₹ 19,500 has been returned by the Bank dishonoured. Noting charges paid by Bank ₹ 25.ANSWER:

Pass entries in the books of drawer and drawee.ANSWER:

Question 21(B):Journalise the following in the books of X:Y's acceptance for ₹ 2,00,000 which was discounted by X from the bank has been dishonoured, noting charges paid by bank being ₹ 100.ANSWER:

Question 22:On 10th April, 2018, Ravi purchased from Mohan goods for ₹ 30,000 plus CGST and SGST @ 9% each. Ravi paid ₹ 15,400 in cash and accepted a bill for two months for the balance amount drawn on him by Mohan. Mohan endorsed the bill to Rakesh. The bill was dishonoured on the due date. Rakesh had to spend ₹ 100 as noting charges.

Immediately after the dishonour, Mohan accepted a new bill drawn by Rakesh, in which ₹ 200 for interest were also included. After 20 days of the dishonour of the bill, Ravi paid full amount of Mohan including ₹ 50 as interest. Show Journal entries in the books of Ravi, Mohan and Rakesh.ANSWER: 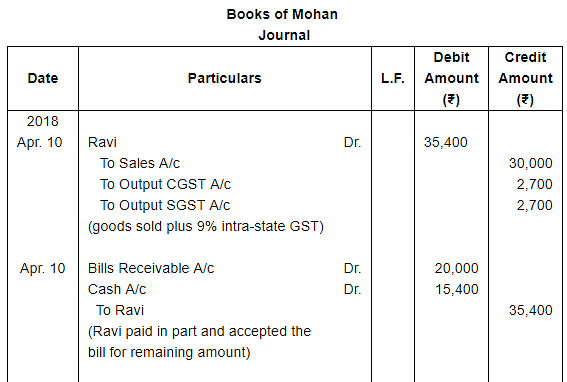 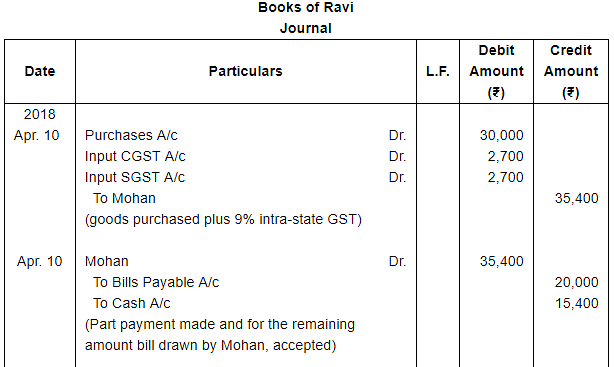 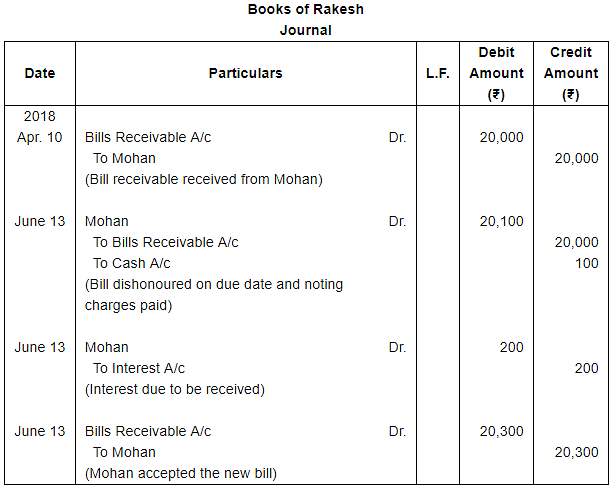 Page No 18.63:Question 23:On March 4, 2017, A purchased from B goods for ₹ 50,000. A paid 40% immediately and for the balance gave a promissory note to B payable after 30 days. B immediately endorsed the promissory note in favour of his creditor C for the full settlement of a debt of ₹ 31,000. On the due date the bill was dishonoured and C paid ₹ 100 as noting charges. On the same date C informed B about the dishonour of the bill. B settled his debt to C by cheque for ₹ 30,100 which includes noting charges. A settled B's claim by cheque for the same amount.Record the necessary journal entries in the books of A, B and C for the above transactions and prepare A's and C's accounts in the books of B, B's account in the books of A and also B's account in the books of C.ANSWER: 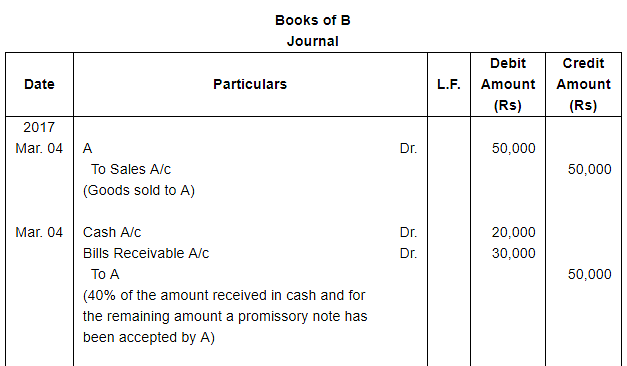 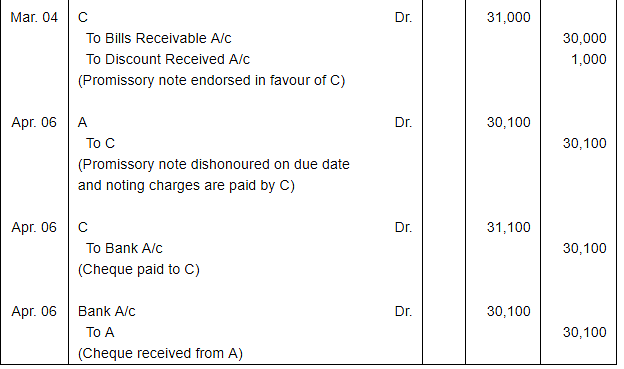 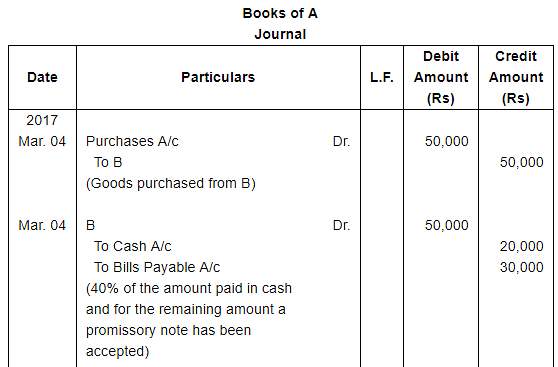 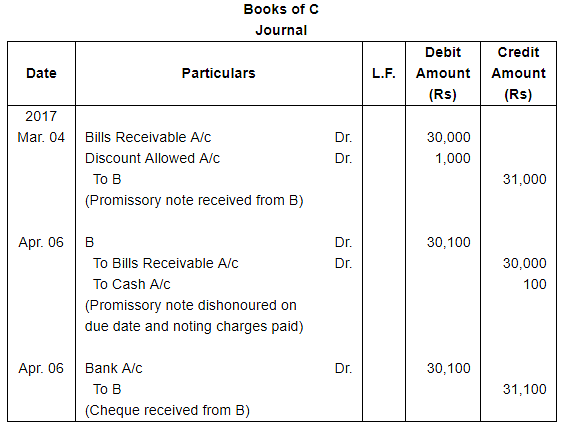 Question 24:On Feb. 01, 2017, Mohan sold goods worth ₹ 25,000 to Naresh and drew upon him a bill payable after 90 days. Naresh accepted the bill and Mohan endorsed the bill immediately in favour of his creditor Raja in full settlement of his account of ₹ 25,300. One week before the maturity of the bill Naresh requested Mohan to cancel the bill and draw upon him a new bill including interest of ₹ 400. Mohan agreed to it. Mohan immediately took the bill from Raja by making the payment to him and then drew upon Naresh a new bill for 30 days which was duly met by Naresh on due date.Pass necessary entries in the books of Mohan.ANSWER:

A purchased goods for ₹ 15,000 from B on March 01, 2017 and accepted a bill of exchange drawn by B for the same amount. The bill was payable after 60 days. On April 28, B sent the bill to his bank for collection. The bill was duly presented by the bank. A dishonoured the bill and the bank paid ₹ 150 as noting charges.

Record the necessary journal entries for the above transactions in the books of A and B.ANSWER: 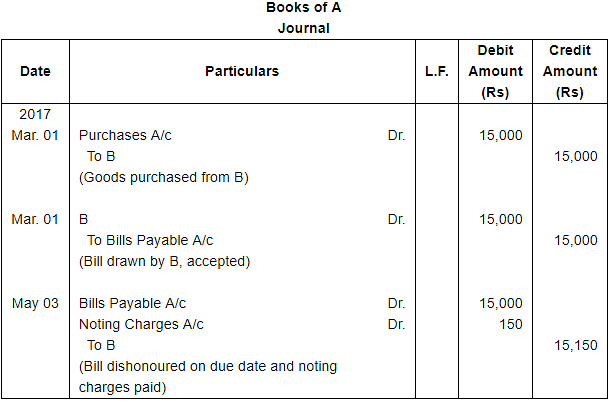 Question 26:Vimal purchased goods ₹ 25,000 from Kamal on Jan. 15, 2017 and accepted a bill of exchange drawn upon him by Kamal payable after two months. On the date of the maturity the bill was duly presented for payment. Vimal dishonoured the bill. 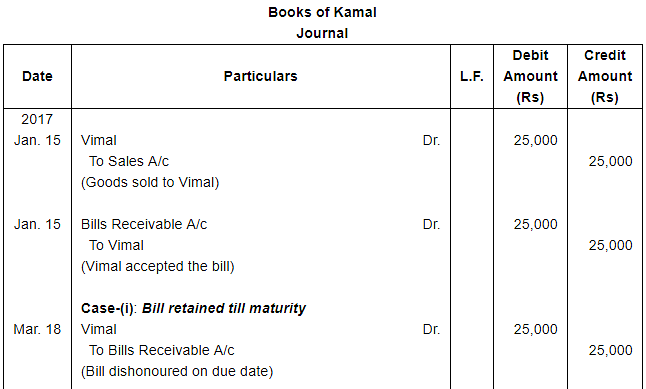 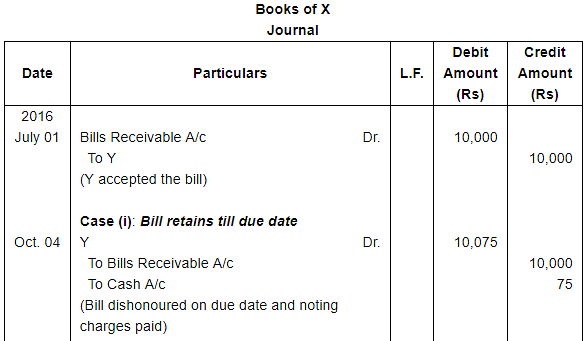 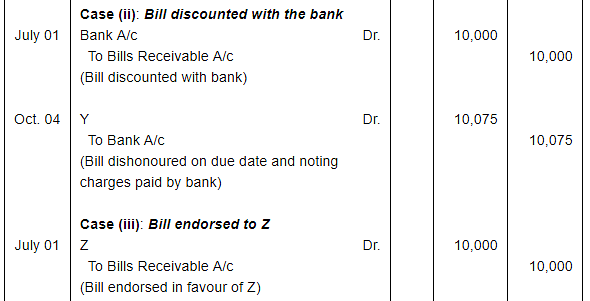 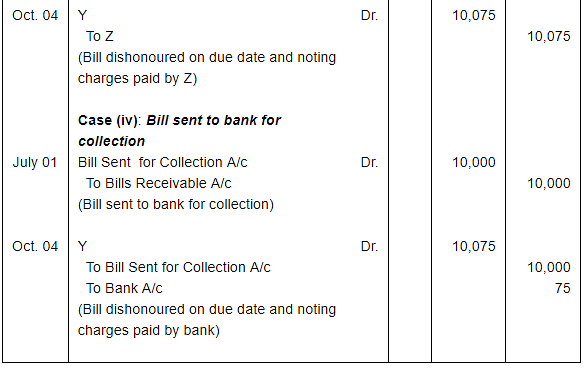 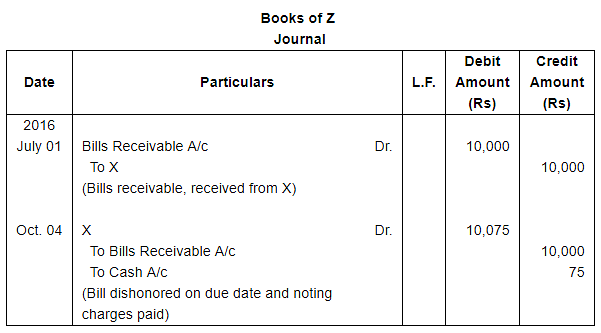 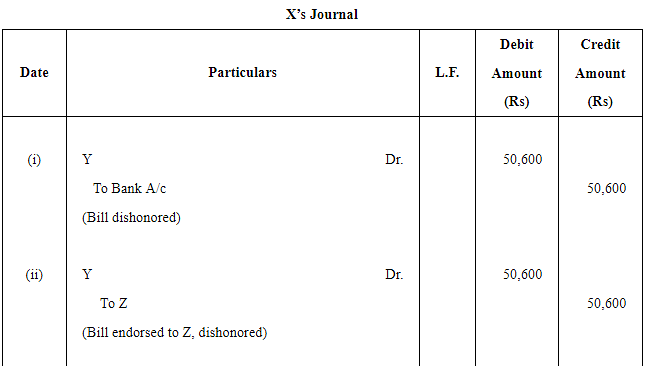 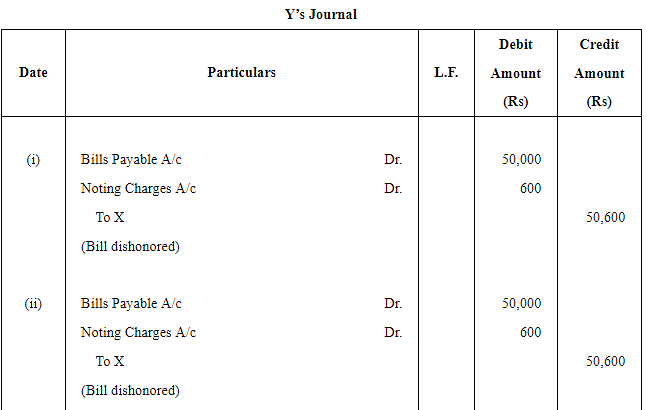 Question 29:
A sold goods to B for ₹ 60,000 Charging IGST @18% and immediately drew a bill on B who duly accepted the same. A endorsed the bill to C. C endorsed it to his creditor D. D discounted the bill for ₹ 68,000. On the date of maturity, the bill was dishonoured and Bank paid noting charges amounting to ₹ 200.
Show Journal entries in the books of all the parties to record these transactions.
ANSWER: 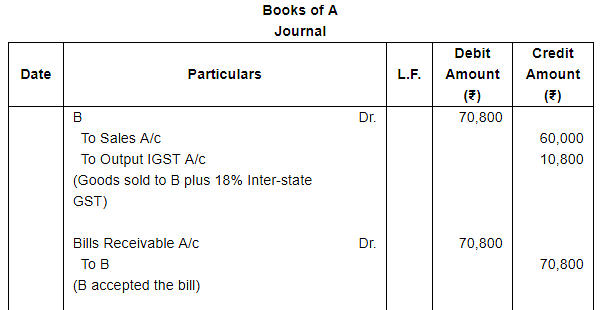 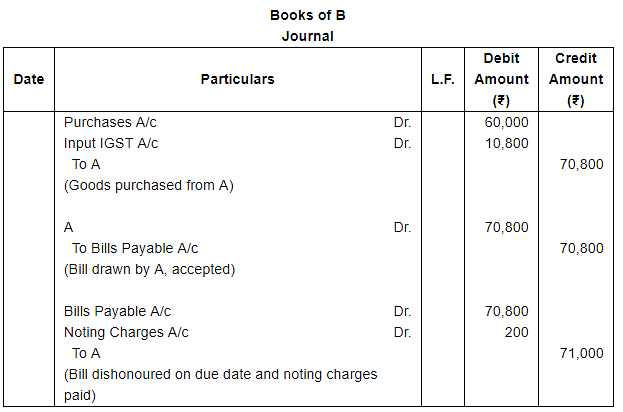 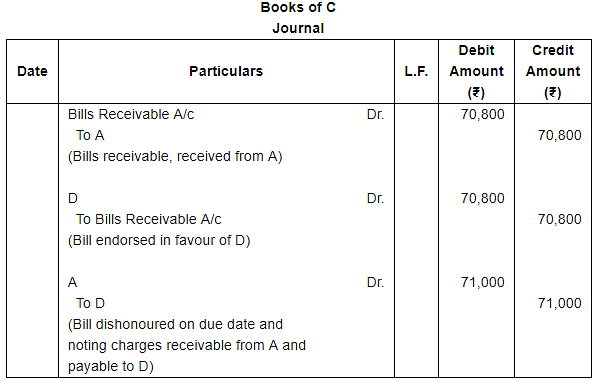 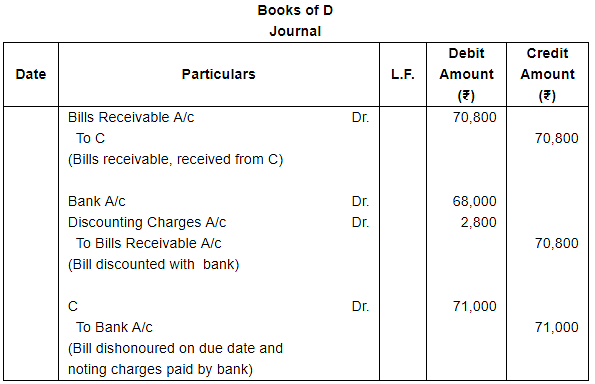 Question 30:
On 1st Jan., 2016, Satish drew on Harish three bills of exchange in full settlement of claims, the first for ₹ 14,000 at one month; the second for ₹ 16,000 at two months and the third for ₹ 18,000 at three months. The bills were duly accepted by Harish. The first bill was endorsed by Satish to his creditor Rajnish on 3rd Jan., 2016.
The second bill was discounted on 15th Jan. for ₹ 15,900 and the third bill was sent to bank for collection on 4th Feb. All the bills were met on maturity except the second bill which was dishonoured, noting charges being paid ₹ 240. Satish charged ₹ 300 for interest from Harish and drew on him a fourth bill for two months for ₹ 16,540. The fourth bill was duly met on maturity.
Give Journal entries in the books of Satish and Harish.
ANSWER: 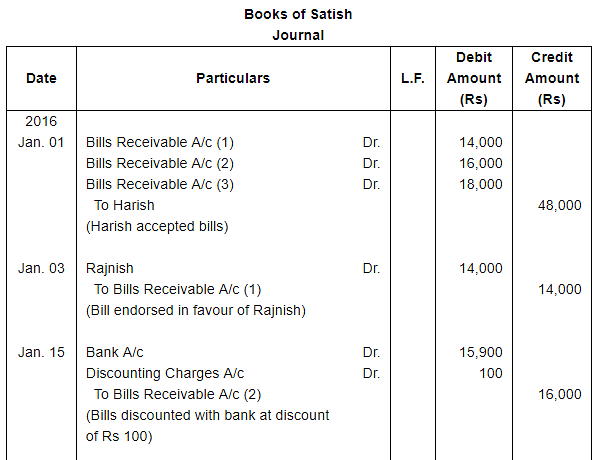 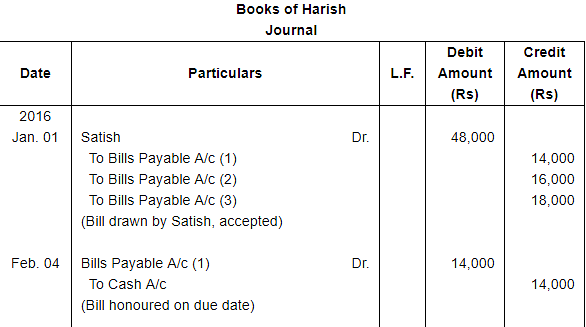 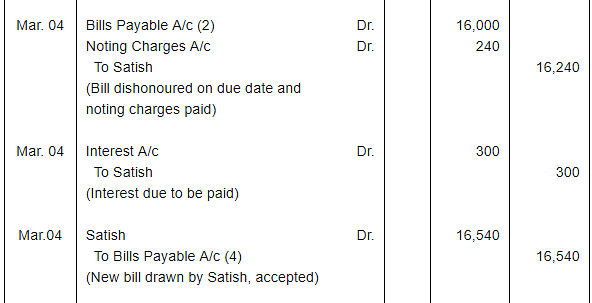 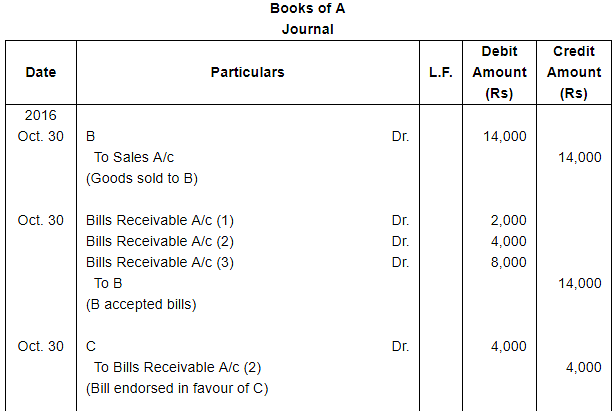 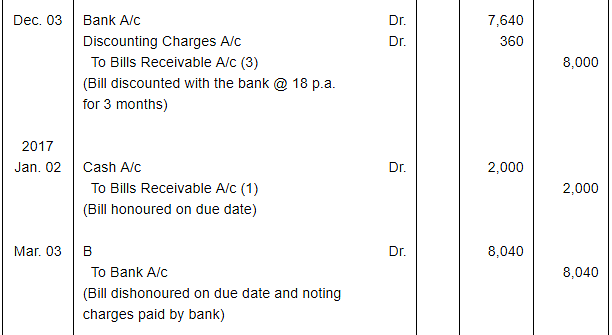 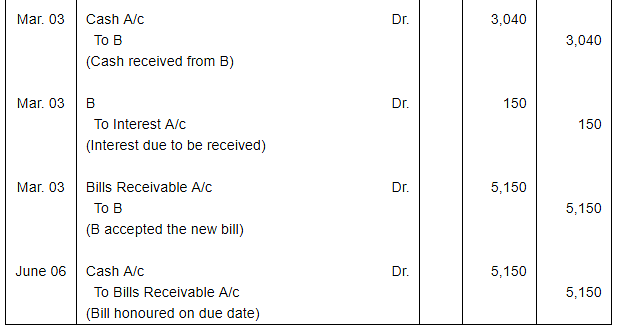 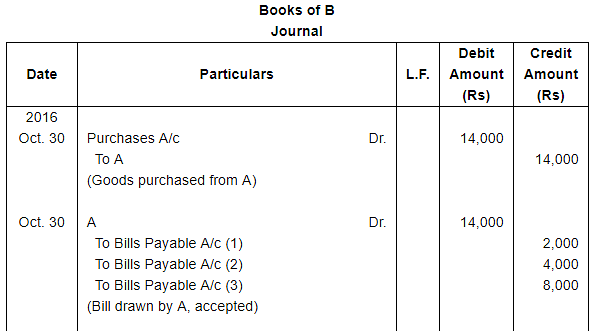 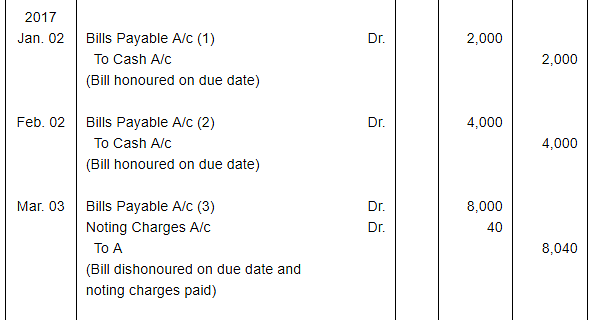 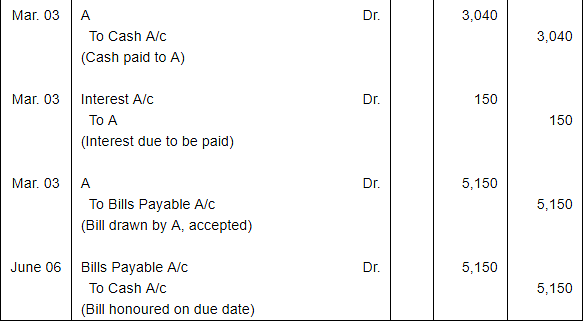 Question 32:
On 1st January, 2010, Arun purchased from Barun goods invoiced at ₹ 10,000. On the same date, Barun drew upon Arun a bill for the amount at 2 months and Arun accepted the same. On 4th January, 2010, Barun got the bill discounted with his bank @12% per annum. On due date, Arun told Barun that he was not in a position to pay the full amount and requested Barun to accept ₹ 5,000 in cash and draw a fresh bill at 2 months for the remaining amount plus interest at 15% per annum, Barun agreed. The second bill was duly met on the due date.
Give journal entries to record the above transactions in the books of Barun.
ANSWER: