The document Biomolecules, JEE Main Notes JEE Notes | EduRev is a part of the JEE Course NEET Revision Notes.
All you need of JEE at this link: JEE Reactions of Glucose:a) With HI/P: It undergoes reduction to form n-hexane while with sodium amalgam it forms sorbitol. j) Glycoside formation: When a small amount of gaseous HCl is passed into a solution of D (+) glucose in methanol, a reaction takes place that results in the formation of amomeric methyl acetals. Carbohydrate acetals, genrally are called glycosides and an acetal of glucose is called         glucoside.k) Kiliani - Fischer Synthesis: This is a method of lengthening the carbon chain of an aldose.

l) Ruff Degradation: It is opposite to Kiliani Fischer synthesis that can be used to shorten the chain by a similar unit. 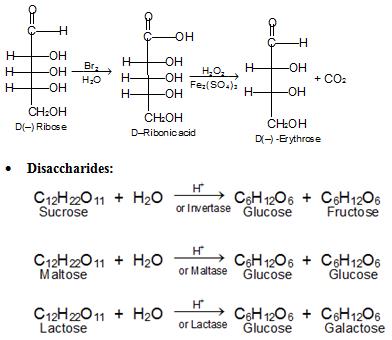 Amino Acids,Amino acids are molecules, which contain two functional groups, one is carboxylic group and another is amino groupH2N CH2 COOH : Amino acetic acid, or GlycineCH3 CH (NH­2) COOH : a - Amino propionic acid or AlanineH2N CH2 CH2COOH : b - Amino propionic acidAcidic Amino Acid: These amino acids contain a second carboxyl group or a potential carboxyl group in the form of carboxamide.Basic Amino Acids:  These contain a second basic group which may be an amino group Iso Electric Point:The hydrogen ion concentration of the solution in which a particular amino acid does not migrate under the influence of an electric field is called the isoelectric point of that amino acid.

PeptidesA peptides as the amides formed by interaction between amino groups and carboxyl groups of amino acids.

Depending upon the number of amino acid residues per molecule, they are known as dipeptides, tripeptides and so on and finally polypeptides.Every two amino acids are linked by means of a –CO-NH group, which is commonly referred as peptide bond.