The document Biot Savart Law, Amperes Law & Magnetic Force: Assignment Notes | EduRev is a part of the IIT JAM Course Electricity & Magnetism.
All you need of IIT JAM at this link: IIT JAM

Q.1. A square loop is placed near an infinite straight wire as shown in figure. The loop and wire carry a steady current I2 and I1 respectively. Then find the net force acting on the square loop. 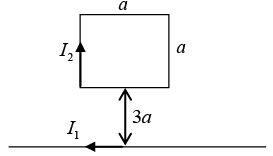 The force on the two sides cancels.At the bottom,

Q.2. A system of two circular co-axial coils carrying equal currents I along same direction having equal radius R and separated by a distance R (as shown in the figure below). Find the magnitude of magnetic field at the midpoint P. Thus, the field from each conductor is B(2πr) = μ0JπR2, where, Ienc = JπR2 and R is the radius of the conductor. (This is a good approximation of the current, as one assumes that the vacuum region in the center is small compared to the area of the conductors.)

Making the approximation that R ≈ d / 2, one has

Since both fields contribute in the center, the field is twice that,

Q.4. A conducting wire is in the shape of a regular hexagon, which is inscribed inside an imaginary circle of radius R, as shown in figure. A current I flows through the wire. Find the magnitude of the magnetic field at the center of the circle. along the semicircular closed path of radius 2 units shown in the figure. 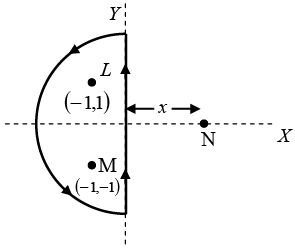 (b) A third long wire carrying current I and also perpendicular to the XY plane is placed at a point N with coordinates (x,0) so that the magnetic field at the origin is doubled. Find x and the direction of the current in the third wire. The current in the third wire is inward so that

Q.6. Find the magnitude and direction of a force vector acting on a unit length of a thin wire, carrying a current I = 8.0A, at a point O, if the wire is bent as shown in(a) Figure (a), with curvature radius R = 10 cm;(b) Figure (b), the distance between the long parallel segments of the wire being equal to l = 20 cm.

(a) The magnetic field at O is only due to the curved path, as for the line element,

Magnitude of force per unit length is

(b) In this part, the magnetic field at O will be effective only due to semi infinite segments of wire.

Magnitude of force per unit length is

Q.7. Three long, straight wires in the xz -plane, each carrying current I , cross at the origin of coordinates, as shown in the figure above. Let Due to the wire crossing the first and third quadrants is

Due to the wire crossing the second and fourth quadrants is

Q.9. Consider a rectangular wire frame whose diagonal length is d and the angle between the diagonal is ϕ as shown in figure. If the current flowing in the frame is I, then the magnetic field B at the centre of the frame is 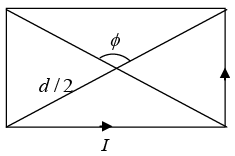 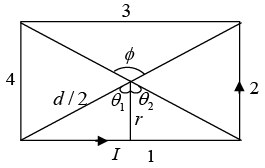 Magnetic field due to segment 2 and 4 is

Hence, the magnitude of total magnetic field is

Q.10. Three infinitely-long conductors carrying currents I1 ,I2 and I3 lie perpendicular to the plane of the paper as shown in the figure. If the value of the integral