The questions related to blood relations involve various family members and their relations.

Table: Relationships among the family members 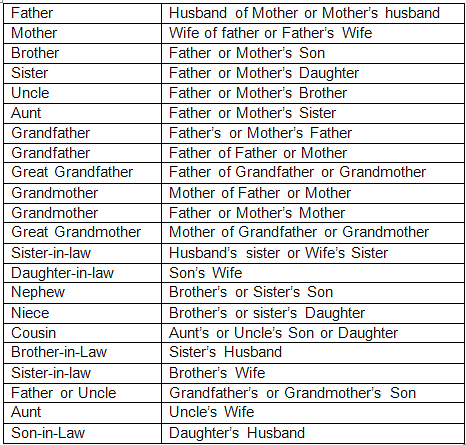 Try yourself:Pointing to a photograph on the wall, Anil says to Nitesh, “ The person in the photograph is the son of my mother’s sister and is your brother”. Which of the following is true?
Explanation

Anil’s mother’s sister is Anil’s aunt, so her son would be Anil’s cousin.
Nitesh is the brother of Anil’s cousin, so Nitesh is also a cousin of Anil.
Hence d is correct.

If the question asks about Single person blood relation, then follow the following steps for solving the question.

Step 1: Simplify the given blood relations as much as you can. For example, Father’s Son would be me, etc.

Step 2: Break the given sentence at “is/as/was” to reach the answer quickly.

Step 3: Check the answer by going backward in the given sentence.

Let us take an example, Questions says – Pointing to a photograph, a lady tells Pramila, “I am the only daughter of the lady and her son is your maternal uncle.” How is the speaker related to Pramila’s father?

Solution: Now, ‘only daughter of the lady’ – refers to speaker’s mother (which is not important for our question, so leave it there)

Generally the following symbols are used:

Let us give an example to help you understand the process.

Question: Anil and Bimal are brothers and Chandani and Damini are sisters. Anil’s son is Damini’s brother. How is Bimal related to Chandani?

Solution: The individuals in the given blood relations problem can be denoted by using just the first letter of the name to further simplify. The blood relations tree of this question would look like this: 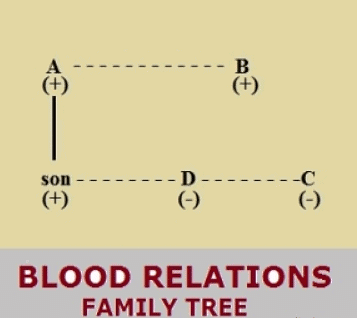 Let's have a look at different types of questions of Blood Relations.

Mr Rajat Chopra and his wife Nikita Chopra have 3 sons whose names are Ramesh, Suresh and Umesh. Mishra family is a neighbour of the Chopra’s.Mr Amit Mishra and his wife Neha Mishra have 2 daughters whose names are Payal and Ruchi. The two neighbouring families go to Kerala for a vacation. They decide to go for boating but no boat could carry more than 3 members. So they hire 3 boats. None of the children knows how to row a boat, so at least one of the adults have to be there on each boat. Moreover, no boat has all three members of the same family.Q.1. If the three children from the Chopra family ride in different boats, then which of the following is definitely false?(I) Rajat and Nikita are rowing in the same boat.(II) Amit and Neha are rowing in the same boat.

Options:A: I OnlyB: II Only

D: Neither I nor II

Ans: ASol: The three boys are rowing in different boats. We know that there are only three boats and each boat can carry three persons. Hence Amit and Nikita cannot be on the same boat as that would mean that one of the boats has all the members from the Chopra family. So I is definitely false.

Statement II can be true as well as false. It can be true if the two people travel in one boat while Amit and Nikita row the other two boats. Hence nothing can be said with certainty about statement II. Thus the correct answer is option A

Q.2. If Nikita and Amit are on the same boat, then which of the following cannot be the combination of people on any boat?

Q.3. If Neha and Ruchi are on the same boat, which of the following could be a list of people on another boat?

Q.4. If Rajat and Amit are in the same boat and each of the three brothers are on different boats, then which of the following is necessarily true?

Try yourself:P and Q are sisters and R and S are brothers. P’s daughter is S’s sister. How is Q related to R?
Explanation

There are 6 members (A, B, C, D, E, F) in a family who are spread across 3 generations. There are two couples in the family and no one from the third generation is married. E is the wife of C. F and B are the only people belonging to their generation and they are also a couple. There are 4 male members in the family.

Q.5. Which of the following must be true?

A: D is the grandson of A
B: A and D belong to the same generation
C: There is no female in the third generation
D: E is the father of F

Q.6. P and Q are sisters and R and S are brothers. P’s daughter is S’s sister. How is Q related to R?
A: Maternal aunt
B: Niece
C: Nephew
D: GrandMother

Sol: Given: P’s daughter is S’s sister → R and S are children of P→  Q is the maternal aunt of R and SQ.7. Pointing to a photograph on the wall, Anil says to Nitesh, “ The person in the photograph is the son of my mother’s sister and is your brother”. Which of the following is true?

In this type of question, the statements are given in the form of puzzles.

Sol: From the statement, a simple diagram can be sketched to analyse the relation between Y and Z. 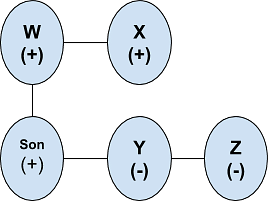 As the total generations in the question are two, the number of rows in the diagram will also be two. The sign (+) implies male, while (-) implies female.
From the diagram it is clear that Z’s and Y’s father is W. As X is W’s brother, it can be said that X is Y’s uncle.

Q.9. Consider the following statements and answer the given question.

Sol: This can be solved by dividing the question and solving from left to right. Now a simple diagram can be made by mentioning the gender and their relations as given below: 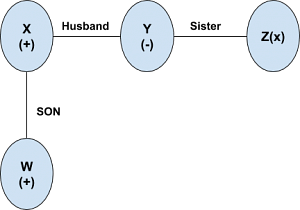 Thus, it is easily seen that W is the nephew of Z.

Q.10. That girl is Ramu’s sister’s uncle’s wife’s daughter. How is that girl related to Ramu?

Ans: This question seems confusing initially; but, breaking the sentence into parts and then analyzing the relation can be extremely easy. Now this sentence can be broken as,

Therefore, that girl is the cousin of Ramu.