The top 10 insurance companies in India have left their indelible mark on the industry with their sheer presence, growth as well as pioneering services, range of products, and overall financial achievements. Many of these companies have also attained top positions in the industry thanks to their efforts at workforce development and contribution to the Indian insurance industry in general.

Following are the leading insurers in India:

Life Insurance Corporation (LIC) is the biggest life insurer in India and totally owned by the union government. It specializes in individual life insurance, pension plans, and group insurance plans. It has several subsidiaries including the following:

It was introduced to computers during 1964 and since then has been utilizing information technology for serving its customers. It is also a rewarding option when it comes to work opportunities, especially for sales agents who are provided training at par with international standards, and a lot of independence for working. In all, the financial prowess of this insurer is yet to be matched.

One of the major reasons behind the growth of Tata AIG General Insurance has been its employees. The organization regards its employees as valuable assets and takes pride in the fact that it has one of the finest workforces in the general insurance industry.

Tata AIG General is regarded as one of the major names in the general insurance sector of India and has recently won the 5th position among the top companies to work for in the financial services and banking sectors. This was done in a survey done by PeopleStrong, a well known HR consultancy, on behalf of Business Today. In fact, it was the only general insurer to be featured in that survey.

One of the major reasons why employees loved working at Tata AIG was the growth and career opportunities afforded by the organization followed by the remuneration and other financial benefits. As per its employees Tata AIG also offers other benefits like:

Bajaj Allianz General Insurance has the backing of Allianz, which is one of the leading insurers of the world and Bajaj, which is among the top motorcycle manufacturers in India. It is a leading name when it comes to property insurance.

Bajaj Allianz offers a wide range of general insurance products and services through a network that comprises 200 offices across India. Following are some areas where it operates:

Majority of its yearly revenue comes from automotive insurance. It was established during 2001 and since then has become one of the leading names in the general insurance sector.

New India Assurance is one of the leading names in the Indian insurance industry thanks to its pioneering efforts in several areas such as satellite insurance. Yet another reason of its current stature is its presence – it has a substantial amount of offices in India as well as outside the country.

The skill levels among the employees of the insurer are commendable enough and the organization also has 1068 offices in India that are totally automated. It also enjoys a good capital position and operating performance that have helped it create a strong position in the market.

At present the organization has also extended its wings outside India with offices in areas such as Japan, Fiji, UK, Australia, and the Middle East.

ICIC Prudential Life Insurance has a big network comprising more than 1900 branches, which includes 1074 micro offices and more than 210,000 advisors. It is one of the earliest life insurers to have received the AAA (Ind) National Financial Strength rating from Fitch.

For three straight years it has been voted the Most Trusted Private Life Insurer – a testament of its performance and growth over the years.

IFFCO TOKIO has a good network comprising 110 offices across the country and 51 Strategic Business Units. It is also the sole insurer in India that has a totally owned distribution channel named IFFCO-TOKIO Insurance Services Ltd for catering its retail clients.

At present it operates in 350 odd towns with approximately 1400 employees. It is also among the first insurers to have underwritten big policies for automobile and fertilizer companies. The policies were based on global rates and provided clients a proper level of premium outflow.

ICICI Lombard General Insurance operates in various domains such as general insurance, insurance claims management, reinsurance, and investment management and is also the biggest general insurer among the privately held companies of India.

ICICI Lombard has risen to the top of the pile in a short time span. It is also the first India based organization to have received the ISO 9001:2000 official recognition. ICRA has given it the iAAA rating, which indicates that it has the highest level of capability when it comes to paying claims.

It is also the first organization to have provided digitally signed documents via its web based interface. ICICI Lombard has also been awarded several times for its functioning and quality of its products.

Oriental Insurance is positioned fairly well when it comes to rankings and has received top honors from some of the leading credit rating agencies of India. AM Best, an international rating agency has given it a B++ rating, which is a good ranking. It has 26 regional offices and at least 900 operating offices in India. Besides, it functions in locations such as Nepal, Dubai, and Kuwait.

Birla Sun Life Insurance has always been a major contributor to the development and growth of India’s life insurance sector and is presently rated as one of the top 5 private life insurers in the country.

It is also the first financial services provider to have come up with business continuity plans, Unit Linked Life Insurance plans and free look facilities in India.

The organization believes in values like passion, commitment, and support for consumers and assists people with their risk management. It caters to both individual as well as institutional clients.

HDFC Standard Life Insurance (now, HDFC Life) is one of the leading names among the private enterprises functioning in India. It deals in both group and individual insurance products. They also possess sufficient financial capability to take care of long term investments in a resourceful and safe manner.

It has a commendable presence in more than 700 towns and cities and has 568 branches. It has employed approximately 2 lakh financial advisors for dealing with different requirements of their customers such as protection, investments, pension, health, and savings. It also offers customized plans for the convenience of its clients. 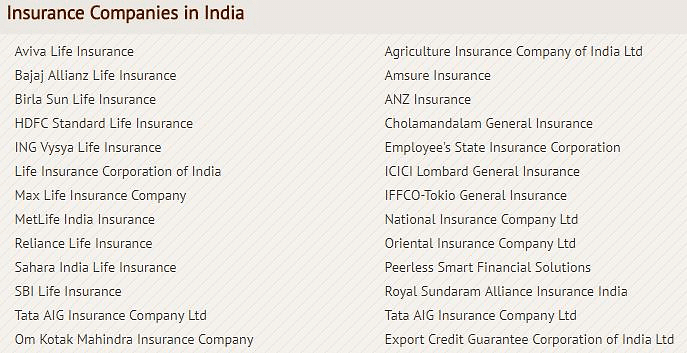