A machine element, after design, requires to be manufactured to give it a shape of a product. Therefore, in addition to standard design practices like, selection of proper material, ensuring proper strength and dimension to guard against failure, a designer should have knowledge of basic manufacturing aspects.

In this lesson, we will discuss briefly about some of the basic manufacturing requirements and processes.

First and foremost is assigning proper size to a machine element from manufacturing view point. As for example, a shaft may be designed to diameter of, say, 40 mm. This means, the nominal diameter of the shaft is 40 mm, but the actual size will be slightly different, because it is impossible to manufacture a shaft of exactly 40 mm diameter, no matter what machine is used. In case the machine element is a mating part with another one, then dimensions of both the parts become important, because they dictate the nature of assembly. The allowable variation in size for the mating parts is called limits and the nature of assembly due to such variation in size is known as fits.

Fig. 1.3.1 explains the terminologies used in defining tolerance and limit. The zero line, shown in the figure, is the basic size or the nominal size. The definition of the terminologies is given below. For the convenience, shaft and hole are chosen to be two mating components. 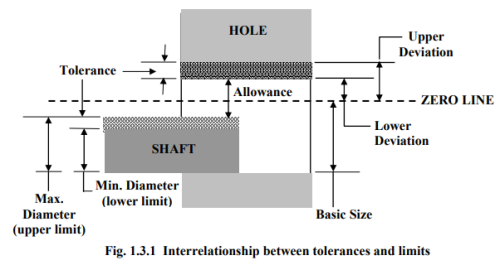 Tolerance is the difference between maximum and minimum dimensions of a component, ie, between upper limit and lower limit. Depending on the type of application, the permissible variation of dimension is set as per available standard grades.

Tolerance is of two types, bilateral and unilateral. When tolerance is present on both sides of nominal size, it is termed as bilateral; unilateral has tolerance only on one side. The Fig.1.3.2 shows the types of tolerance

It is the difference of dimension between two mating parts.

It is the difference of dimension between the maximum possible size of the component and its nominal size.

Similarly, it is the difference of dimension between the minimum possible size of the component and its nominal size.

It defines the location of the tolerance zone with respect to the nominal size. For that matter, either of the deviations may be considered.

We have learnt above that a machine part when manufactured has a specified tolerance. Therefore, when two mating parts fit with each other, the nature of fit is dependent on the limits of tolerances and fundamental deviations of the mating parts. The nature of assembly of two mating parts is defined by three types of fit system, Clearance Fit, Transition Fit and Interference Fit. The fit system is shown schematically in Fig.1.3.3. There are two ways of representing a system. One is the hole basis and the other is the shaft basis. In the hole basis system the dimension of the hole is considered to be the datum, whereas, in the shaft basis system dimension of the shaft is considered to be the datum. The holes are normally made by drilling, followed by reaming. Therefore, the dimension of a hole is fixed due to the nature of the tool used. On the contrary, the dimension of a shaft is easily controllable by standard manufacturing processes. For this reason, the hole basis system is much more popular than the shaft basis system. Here, we shall discuss fit system on hole basis. 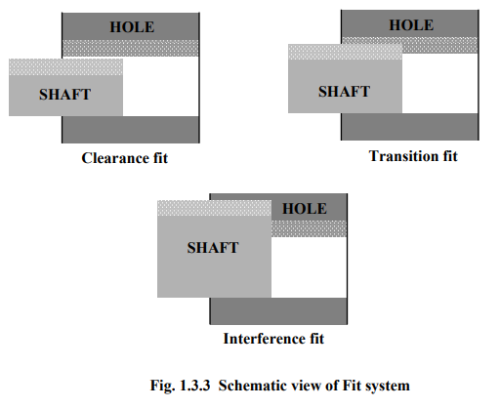 In this case, no matter whatever may be the tolerance level in shaft and the hole, there is always a overlapping of the matting parts. This is known as interference fit. Interference fit is a form of a tight fit.