The Budget LineA higher indifference curve shows a higher level of satisfaction than a lower one. Therefore, a consumer, in his attempt to maximise satisfaction will try to reach the highest possible indifference curve. But in his pursuit of buying more and more goods and thus obtaining more and more satisfaction, he has to work under two constraints: first, he has to pay the prices for the goods and, second, he has a limited money income with which to purchase the goods.A consumer’s choices are limited by the budget available to him. As we know, his total expenditure for goods and services can fall short of the budget constraint but may not exceed it.Algebraically, we can write the budget constraint for two goods X and Y as:PxQx+PyQy ≤ BWherePX  and PY  are the prices of goods X and Y and QX  and QY  are the quantities of goods X and Y chosen and B is the total money available to the consumer.The budget constraint can be explained by the budget line or price line. In simple words, a budget line shows all those combinations of two goods which the consumer can buy spending his given money income on the two goods at their given prices. All those combinations which are within the reach of the consumer (assuming that he spends all his money income) will lie on the budget line. 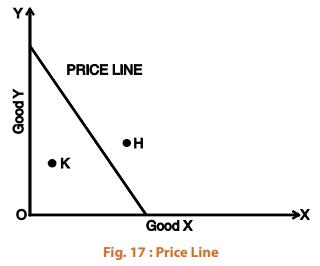 It should be noted that any point outside the given price line, say H, will be beyond the reach of the consumer and any combination lying within the line, say K, shows under spending by the consumer.This slope of budget line is equal to ‘Price Ratio’ of two goods. i.e. PX  /PY

Consumer’s EquilibriumHaving explained indifference curves and budget line, we are in a position to explain how a consumer reaches equilibrium position. A consumer is in equilibrium when he is deriving maximum possible satisfaction from the goods and therefore is in no position to rearrange his purchases of goods. We assume that:(i) The consumer has a given indifference map which shows his scale of preferences for various combinations of two goods X and Y.(ii) He has a fixed money income which he has to spend wholly on goods X and Y.(iii) Prices of goods X and Y are given and are fixed.(iv) All goods are homogeneous and divisible, and(v) The consumer acts ‘rationally’ and maximizes his satisfaction 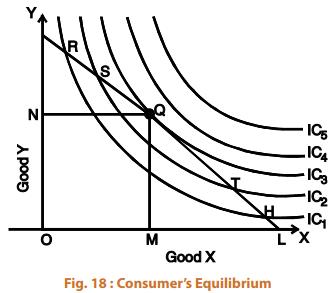 while the slope of the price line indicates the ratio between the prices of two goods i.e

Thus, we can say that the consumer is in equilibrium position when the price line is tangent to the indifference curve or when the marginal rate of substitution of goods X and Y is equal to the ratio between the prices of the two goods. The indifference curve analysis is superior to utility analysis:(i) it dispenses with the assumption of measurability of utility(ii) it studies more than one commodity at a time(iii) it does not assume constancy of marginal utility of money(iv) it segregates income effect from substitution effect.