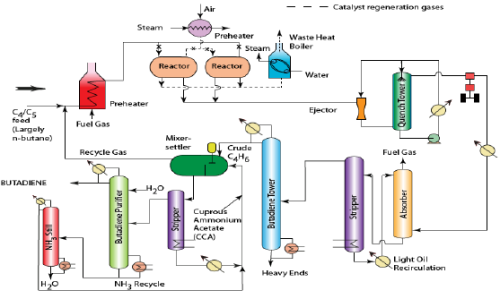 1. Can the steam generated in the waste heat recovery boiler be sufficient to pre-heat the air if a principle of steam reuse is adopted?

Ans: From the basic principle of thermodynamics, somewhere heat needs to be added to the system.  If we presume that the feed pre-heater heats the feed to 650oC (the desired temperature of the reactor) and the catalyst is regeneration energizes the catalyst by 100oC (from 550 to 650oC), the flue gas should be able to generate some steam. However, it can be speculated that the steam generated will not be enough to meet the total air pre-heater requirements. Therefore, some make up steam will be always required.

2. Why is ammonia allowed to get absorbed into cuprous ammonium acetate?

Ans: Ammonia absorption into cuprous ammonium acetate facilitates maximum absorption of butadiene. This is because ammonia in many cases enhanced absorption factors by allowing chemical interaction between molecules which is better than just physical absorption.

3. Why is the fluid recirculated in the quench tower?

Ans: We are targeting gas quenching using a liquid in this process. Quenching a liquid with liquid is instantaneous but quenching a gas with  a liquid needs considerable amount of time, and hold up time is very important. Therefore, fluid internal recirculation is required in the vapour quenching tower.

4. Why a cooler is used in the quenching tower?

Ans: The quenching operation increases the temperature of the fluid that is used for quenching. And we can see that the fluid is always circulated.  Therefore, the purpose of quenching is to just cool the gas and don’t absorb any of the components into itself.  Therefore, to do so, the fluid shall be cooled in between.

5. Why compressor and cooler are at all required after quenching process?

Ans: The unit following quench tower is absorption.  Absorption is favoured at higher pressure and lower temperature. Therefore both compressor and cooler are required to achieve these conditions of favourable absorption.

6. Why cooler is followed after compression but not vice versa?

7. Explain in a more elaborate way what happens in the Butadiene purification fractionators?

Ans: The butadiene purification fractionator is fed with ammonia + Butadiene stream in which somehow ammonia should be recovered. Therefore, this unit is part of the azeotropic distillation that separates butadiene + ammonia as one of the products and eventually butadiene and ammonia are separated using water, as water absorbs ammonia instantaneously to form ammonium hydroxide. Eventually, it is also easy to strip the ammonia gas from aqueous ammonia solution. 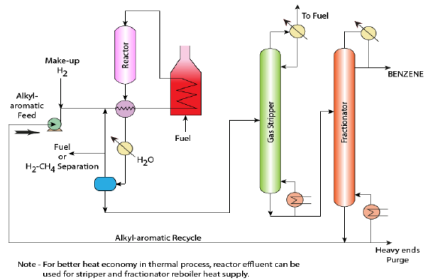 1. Despite removing H2 and CH4 from the phase separator, why again we remove them from the gas stripper unit?

Ans: This is due to the basic problem in the difficulty of sharp equilibrium factors which do not exist for these components.  The equilibrium separation factors in a phase separator unit where the governing pressure and temperature dictate the distribution of components in the liquid and gas stream. Mostly methane and H2 are removed as vapour stream in the unit. But still at the pertaining pressure and temperature of the phase separator, some lower order alkanes stay back in the liquid stream. Therefore, gas stripping is carried out to remove these.

2. Comment upon fuel efficiency in the process and possibilities to enhance it?

Ans: The process should indicate maximum fuel efficiency. This can be achieved by

a) Heat integration of feed and product streams to the reactor

b) Re use of fuel gas streams as a fuel in the pre-heating furnace.If these two options are followed, then the process has maximum fuel efficiency and can be regarded to be very energy efficient.

3. Do you suggest toput one more distillation column for the heavy end compounds. If so why?

4. Do you suggest any other alternative to eliminate the water cooler and even enhance the energy efficiency of the process?

Ans: Yes, it is possible, but existing temperatures of the gas stripper bottom sections need to be carefully analyzed. This is also due to the fact that phase separator operates at 450 psig and 100oF.  Therefore, heat integration with gas stripper or fractionator reboilers can be beneficial and this way the process can be made even more energy efficient.

5. What is the basic problem of H2 in the reactor?

Ans: Hydrogen causes embrittlement due to severe adsorption on the metal surface at higher pressures.  Therefore, chrome steel is used to avoid these embrittlement problems as material of construction for the reactor.

6. Why is methane purged using the gas purge stream from the phase separator?

Ans: The reaction kinetics dictate the maximum concentration of methane in the gas stream entering the reactor. Therefore, to achieve maximum conversion, methane is purged.