Q2. As we move along a downward sloping straight-line demand curve from left to right, price elasticity of demand: (choose the correct alternative)
(a) remains unchanged
(b) goes on falling
(c) goes on rising
(d) falls initially then rises
Ans. (b) Goes on falling

Q3. Define market demand.
Ans. Sum of the quantities that all consumers of a commodity are willing to buy at a given price during a period of time.

Q7. State the meaning and properties of production possibilities
frontier.
Ans. PPF is the locus of different combinations of the two goods that can be produced with fixed resources, assuming full and efficient utilization of these resources.
Properties:
(1) Slopes downward from left to right.
(2) Concave to the origin.

Q8. Show that demand of a commodity is inversely related to its price.
Explain with the help of utility analysis.
OR
Why is an indifference curve negatively sloped? Explain.
Ans.  A consumer buys a good up to the point at which
MU=Price
Suppose price falls, then
MU>Price
This induces consumer to buy more of the good. It shows inverse relation between price and
demand of a good.

Q9. Explain the conditions of consumer’s equilibrium under indifference curve approach.
Ans. Let the two goods consumed by the consumer be X and Y. The equilibrium conditions are:
1)

declines as more of X is consumed.

It means that the consumer is willing to pay more for X than market Price of X. It will induce the consumer to buy more of X. Buying more of X reduces

This process will continue till =

Q10. State different phases of the law of variable proportions on the basis of total product. Use diagram.
OR
Explain the geometric method of measuring price elasticity of supply. Use diagram.
Ans. 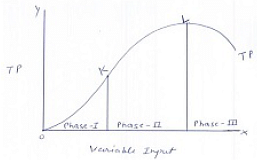 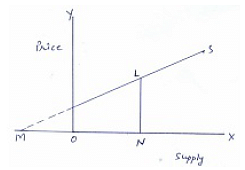 Given supply curve S,to find Es at L.
The steps are:
(1) Extend the supply curve till it intersects the extended X-axis at M.
(2) Draw a perpendicular from L intersecting X-axis at N.
(3) Take the ratio of intercepts on the X axis at M and N.as

Q11. Explain the ‘free entry and exit of firms’ feature of monopolistic competition.
Ans. Free entry and exit of firms means that there are no barriers before the firm for entering into the industry and leaving the industry. New firms enter when they find that the
existing firms are earning super normal profits.With their entry, output of the industry increases, which leads to fall in the price of the product. This continues till each firm is
earning only normal profit. The existing firms leave when they face losses. As they leave, output of the industry goes down, raises the price of the product till the losses are wiped out. 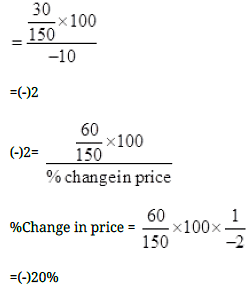 - Excess supply of a good creates competition among the sellers of the good, because the sellers will not be able to sell all they want to sell at the existing price. This leads to fall in price of the good.
- Fall in price leads to rise in demand and fall in supply of the good. - The change continues till demand for the good equals to its supply and the market is in equilibrium again.

Q15. Given below is the cost schedule of a product produced by a firm. The market price per unit of the product at all levels of output is Rs. 12. Using marginal cost and marginal revenue approach, find out the level of equilibrium output. Give reasons for your answer: 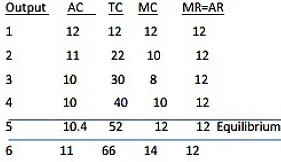 The producer is in equilibrium at 5 units of output, because it fulfills the following two conditions of producer’s equilibrium.
1. MC=MR
2. MC is greater than MR beyond equilibrium.

Q18. Give the meaning of involuntary unemployment.
Ans. It is fiscal deficit net of interest payment.

Q20. Give the meaning of balance of payments.
Ans. BOP is a record of inflows and outflows of foreign exchange.

Q22. Explain the store of value function of money.
OR
State the meaning and components of money supply.
Ans. Money acts as an asset which can be kept for future use and is available in convenient denominations. This is store of value function of money.
OR
It is the stock of money in the economy at a particular point of time. Components of money
Supply = Currency with public + demand deposits with banks.

Q26. An economy is in equilibrium. From the following data about an economy calculate autonomous consumption.
(i) Income = 5000
(ii) Marginal propensity to save = 0.2
(iii) Investment expenditure = 800
Ans.

Q28. Explain ‘non-monetary exchanges’ as a limitation of using gross domestic product as an index of welfare of a country.
OR
How will you treat the following while estimating domestic
product of a country ? Give reasons for your answer:
(a) Profits earned by branches of country’s bank in other countries
(b) Gifts given by an employer to his employees on independence day
(c) Purchase of goods by foreign tourists
Ans. Non monetary exchanges include activities like services of family members provided to each other etc.These activities may be left out from estimate of national income due to the
non-availability of data.But these activities do contribute to welfare of the people.Since GDP may not account for such activities,it may be underestimated.As a result welfare of the people is also underestimated.This is thus a limitation of GDP as an index of welfare
OR
- Not a part of domestic product as it is not generated in the domestic territory of the country.
- Not a part of domestic product as it is a transfer payment.
- Part of domestic product as these are exports produced in the domestic territory