Q.1. Money supply includes __________(i) All deposits in banks(ii) Only demand deposits in banks(iii) Only time deposits in banks(iv) Currency with the banks.Ans. (ii) only demand deposits in banks.ORCurrency notes and coins are __________ tenders.(i) Legal(ii) Royal(iii) Nominal(iv) None of the aboveAns. (i) LegalQ.2. Which of the following is not a revenue receipt?(i) Recovery of Loans(ii) Foreign Grants(iii) Profits of Public Enterprises(iv) Wealth TaxAns. (i) Recovery of LoanQ.3. Supply of money refers to…(i) currency held by the public(ii) currency held by Reserve Bank of India (RBI)(iii) currency held by the public and demand deposits with commercial banks(iv) currency held in the government accountAns. (iii) currency held by the public and demand deposits with commercial bank.Q.4. _________________ which a commercial bank holds in other commercial banks, are not regarded as part of money supply.(i) Interbank Deposits(ii) Cash Reserve(iii) Gold(iv) Demand DepositAns. (i) Interbank DepositsQ.5. Accommodating items cause movements of goods and services across the borders. (i) The statement is true(ii) The statement is false(iii) The statement is incomplete(iv) Both (i) and (iii)Q.6. Foreign Exchange Transactions dependent on other Foreign Exchange Transactions are called:(i) Current account transactions(ii) Capital account transactions(iii) Autonomous transactions(iv) Accommodating transactions.Ans. (iv) Accommodating transactions.Q.7. Cut in Repo rate by RBI is likely to ________ (increase/decrease) the demand for goods and services in the economy. (choose the correct alternative)Ans. increaseQ.8. The fall in the savings is due to:(i) Decrease in income(ii) Increase in consumption(iii) Increase in government expenditure(iv) Using savings for consumptionAns. (iv) Using savings for consumptionQ.9. The multiplier is affected by(i) Income and consumption(ii) Savings and consumption(iii) Expenditure and Exports(iv) Income and ExpenditureAns. (i) Income and consumptionQ.10. Equilibrium position may be of full employment or may not be of full employment, and only determines the level of ________________.(i) Income(ii) Consumption(iii) Saving(iv) InvestmentAns. (i) IncomeQ.11. State with valid reason, which of the following statement is true or false :(i) Gross Value Added at market price and Gross Domestic Product at market price are one and the same thing.(ii) Intermediate goods are always durable in nature.Ans. (i) The given statement is false as Gross Domestic Product is the result of sum of Gross Value Added by all the producing units/firms in an economy, during an accounting year.(ii) The given statement is false as intermediate goods are generally non-durable in nature. They are the goods used as raw material and they lose their identity in the production process for the creation of a new commodity, during an accounting year.Q.12. Discuss briefly, the components of current account.Ans. Components of Current Account:(i) Visible : Refers to the merchandise/goods exported from or imported by a country. Exports which result inflows for the country are placed on the credit side whereas, imports are placed on the debit side as they result into outflow of foreign exchange from the country.(ii) Invisible : Refers to the different types of services and transfers that take place between nations. They give rise to monetary receipts and payments for the nation.Q.13. Why do we say that commercial banks create money while we also say that the Central Bank has the sole right to issue currency? Explain what is the likely impact of money creation by the commercial banks on the National Income?Ans. Yes, it is true that Central Bank has the sole right to issue currency, but Currency is needed by the public and commercial banks directly deal with public. Thus, Commercial banks create money in the form of demand deposits related to the loans offered by them to public. Demand deposits of the commercial banks are many times more than their cash reserves. This is based on the historical experience of the banks that cash withdrawal of funds is only a small percentage of the total demand deposits.The money created by the commercial banks in the form of demand deposits is mainly used for investment in production purposes. Any rise in investment leads to many times more increase in the National Income of an economy, via, the Multiplier effect.Q.14. Define Credit Multiplier. What role does it play in determining the credit creation power of the banking system? Use a numerical illustration to explain.Ans. Credit multiplier measures the amount of money that the banks are able to create in the form of deposits with every initial deposit.The credit creation by commercial banks depends on credit multiplier as it is inversely related to LRR. Higher the credit multiplier, higher will be the total credit created and vice - versa.For example, suppose the LRR is 0.2 and initial deposit is Rs. 1000Credit multiplier = 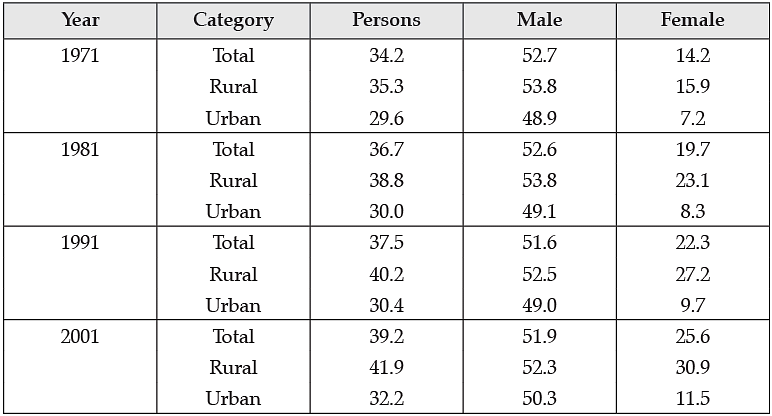 Workforce Participation in IndiaLooking at the trend given in the table what can we say about the women workforce participation in rural and urban areas? Comment on why such a trend is there prevalent in the country.Or‘Discuss the main limitations of health care system in India.Ans. The percentage of female workforce in the rural areas is nearly 30.9% while it is only 11.5% in the urban areas in the 2001 census. This depicts that as compared to the urban women, more rural women accounts for higher share in the female workforce. While on the one hand, the rural women are less educated, unskilled and low productive, on the other hand, urban women being more skilled and productive have higher probability to get employment. Ironically, the urban female accounts for lesser share in the female workforce as compared to their rural counterparts.The following are the reasons for low share of urban females in the total female workforce :(i) As in the agricultural and allied activities, high degree of skills and specialisations are not required. So, rural women engage themselves to support their family on farms.(ii) As poverty in the rural areas is more widespread than in the urban areas, so, the rural women engage themselves in low productive jobs just to support the livelihood of their families.(iii) As the urban families usually earn comparatively higher income than the rural families and further poverty in the urban areas is not as widespread as that of in the rural areas So, there is lesser need for female members to get themselves employed.(iv) The decision to take up jobs by the female members depends on the family rather than herself.(v) Although female literacy in India is improving, yet it has to get much better before urban female accounts for higher share in the total female workforce.ORThe health system in India has undoubtedly improved over the years but the paceof improvement has been unreasonably slow and truly we carry an unhealthy health system.Following may be the most important concerns ailing Indian health system :(a) Low Public Expenditure : In India the health expenditure as a percentage of GDP is absolutely low as compared to some of the major developing countries. It stood at around 4.7% of the total GDP in the year 2014-15.(b) Urban Rural Divide : People living in rural India do not have sufficient medical infrastructure. Nearly 70% of the population lives in rural are as which have only 20% of the total hospitals of the country.(c) Women and child health issues : More than 50 per cent of married women in the age group of 15–49 years have iron deficiency, which has contributed to maternal deaths. Infant Mortality Rate per 1,000 live births in India is 34. Malnutrition and inadequate supply of vaccines lead to the death of millions of children every year.Q.34. ‘Features of Indian agriculture itself explain the story of its backwardness’. Put out your views in the reference to this statement.Ans. Indian agriculture is backward, despite the fact that it is of significant importance in the Indian economy.The main features of Indian agriculture are :(i) Agricultural output depends largely on rainfall and other natural factors like floods, droughts, storms, etc.(ii) The historical, social and cultural background of state affects agricultural output.(iii) Over three-fourth of land holdings are of small size. Thus, agriculture is the source of livelihood for poor farmers.(iv) Farming is a way of life rather than a commercial activity. Thus, production is mainly for selfconsumption.(v) There is little use of modern machinery and fertilisers and pesticides.