The document Catalysis - Chemical Kinetics Chemistry Notes | EduRev is a part of the Chemistry Course Physical Chemistry.
All you need of Chemistry at this link: Chemistry

A catalyst is a substance that participates in chemical reaction by increasing the rate of reaction, yet the catalyst itself remains intact after the reaction is complete.The mechanism describing a catalytic process is as follows:

Where S represents the reactant; C is catalyst and P is the product. The reactant or substrate-catalyst complex is represented by SC and is an intermediate.The rate expression for product formation is

Because SC is an intermediate than apply S.S.A. on the formation of SC.

then rate of the reaction becomes

i.e. much more substrate is present in comparison to catalyst. Then 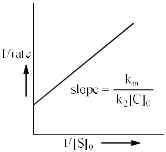 when concentration of substrate [S]0 >> km then reaction rate

i.e. the rate of reaction will reach a limiting value where the rate becomes zero order in substrate concentration.

i.e. the reaction rate is first order in [S]0, but can be first or zero order in [C]0 depending on the size of [C]0 relative to km.

Michaelis-Menten Enzyme Kinetics.Enzyme are protein molecules that serve as catalysts in a chemical reaction.

The kinetic mechanism of enzyme catalyst can be described using the Michaelis-Menten mechanism.

The kinetic mechanism of enzyme catalyst can be described using the Michaelis-Menten mechanism.

But in this mechanism substrate concentration is greater than that of enzyme i.e.

The reciprocal equation of equation (1) is the Lineweaver-Burk equation i.e. i.e. rate is maximum due to all enzyme are present

This is zero order w.r.t. substrate.

This is first order w.r.t. substrate. 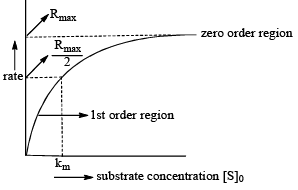 This is graph between initial rate and concentration of substrate.