Fluid Catalytic Cracking
Fluid catalytic cracking is now major secondary conversion process in Petroleum refinery since 1942. there are more than 400 FCC units in world. The process provides around 50 percent of all transportation fuel and 35 percent of total gasoline pool. Major land marks in the history of FCC has been: 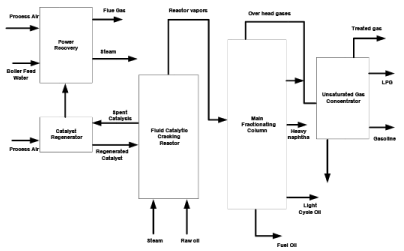 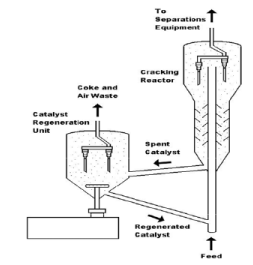 Three basic functions in the catalytic cracking process are:

Reaction - Feedstock reacts with catalyst and cracks into different hydrocarbons;

Regeneration - Catalyst is reactivated by burning off coke; and recerculated to reactor

Fractionation - Cracked hydrocarbon stream is separated into various products like LPG and gasoline, like light cycle oil and heavy cycle oil are withdrawn as side stream

Reactor and Regenerator Section: Catalyst section consists mainly of the reactor and regenerator

Fractionation - Cracked hydrocarbon stream is separated into various products. LPG and gasile are removed overhead as vpour. Unconverted product like light cycle oil and heavy cycle oil are withdrawn as side stream. Overhead product is sent to stabilsation section where stablised gasoline is separated from light products from which LPG is recovered.

The Petro FCC process targets the production of petrochemical feedstock rather than fuel products. This new process, which utilizes a uniquely designed FCC unit, can produce very high yields of light olefins and aromatics when coupled with aromatics complex. The catalyst section of the Petro FCC process uses a high-conversion, short-contact time reaction zone that operates at elevated reactor riser outlet temperatures

Indmax Technology- Residue to Olefin was developed by IOC R&D center and has been successfully commissioned in IOC Guwahati Unit .

Some of the special features of the technology are: