Catalytic reforming is a major conversion process in petroleum refinery and petrochemical industries. The reforming process is a catalytic process which converts low octane naphthas into higher octane reformate products for gasoline blending and aromatic rich reformate for aromatic production. Basically, the process re-arranges or re-structures the hydrocarbon molecules in the naphtha feedstocks as well as breaking some of the molecules into smaller molecules. Naphtha feeds to catalytic reforming include heavy straight run naphtha. It transforms low octane naphtha into high-octane motor gasoline blending stock and aromatics rich in benzene, toluene, and xylene with hydrogen and liquefied petroleum gas as a byproduct. With the fast growing demand in aromatics and demand of high - octane numbers, catalytic reforming is likely to remain one of the most important unit processes in the petroleum and petrochemical industry. Various commercial catalytic reforming processes is given in Table M-VI 6.1.

Octane number is a measurement of antiknock characteristics of fuels

Naphtha hydrotreatment is important steps in the catalytic reforming process for removal of the various catalyst poisons. It eliminates the impurities such as sulfur, nitrogen, halogens, oxygen, water, olefins, di olefins, arsenic and other metals presents in the naphtha feed stock to have longer life catalyst. Figure M-VI 6.1 illustrate hydrotreatment of naphtha.

Various sections in the naphtha hydro treatment unit are: 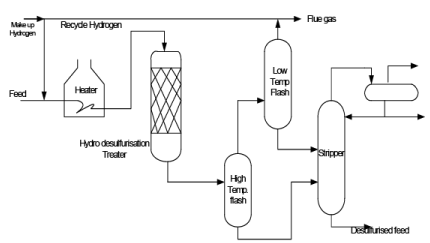 Semi-Regenerative Fixed Bed reactors: In this type of reformers the catalyst generally has a life of one or more years between regeneration. The time between two regeneration is called a cycle. The catalyst retains its usefulness over multiple regeneration.

Cyclic Fixed Bed Reformers: Cyclic reformers run under more severe operating conditions for improved octane number and yields. Individual reactors are taken offline by a special valving and manifold system and regenerated while the other reformer unit continues to operate.

Continuous Reformers: In these reformers the catalyst is in moving bed and regenerated frequently. This allows operation at much lower pressure with a resulting higher product octane, C5+, and hydrogen yield. These types of reformers are radial flow and are either separated as in regenerative unit or stacked one above the other.

A semi-regenerative process uses low platinum and regeneration is required only once a year. The process consists of typically three reactor beds & furnace preheaters. The dehydrogenation is highly endothermic and large temperature drop as the reaction proceeds. Multiple reactors with intermediate reheat is required. Dehydrogenation of naphthene takes place in first reactor and requires less catalyst. Preheat of feed is required. Last reactor for isomerization of paraffins. Typical catalyst distribution in three reactors are 20, 30 and 50percent. Figure M-VI 6.2 shows typical catalytic reforming process.

Performance of the catalyst decreases with respect to time due to deactivation. Reasons for deactivation 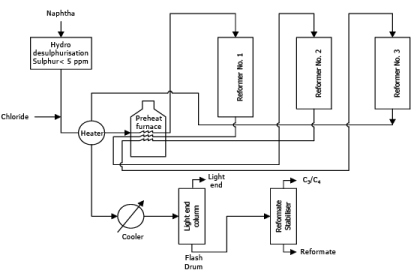 Following are the most prevalent main reactions in catalytic reforming

Dehydrogenation & Dehydrocyclization: Highly endothermic, cause decrease in temperatures, highest reaction rates, aromatics formed have high B.P so end point of gasoline rises Dehydrogenation reactions are very fast, about one order of magnitude faster than the other reactions. The reaction is promoted by the metallic function of catalyst

Dehydrocyclisation: It involves a dehydrogenation with a release of one hydrogen mole followed by a molecular rearrangement to form a naphthene and the subsequent dehydrogenation of the naphthene.