USE OF KARYOTYPING OR IDIOGRAM

(ii) The karyotype of different species are compared and similarities in them represent the evolutionary relationships.

(iii) Karyotype is helpful in detection of chromosomal abberrations and polyploidy.

1. In Situ Hybridization : Using DNA probe labelled with radioactive molecule to locate the position of DNA sequence on chromosome.

2. Fluorescence in Situ Hybridization (FISH) : DNA may also be labelled with fluorochrome to locate the position of DNA sequence on chromosome.

4. Flow cytometry : This is recent technique. In this technique a suspension of many thousands of chromosome is made and the suspended chromosome are stained with a DNA binding flurochrome.

STRUCTURE OF CHROMOSOME (Parts which appears in metaphase chromosome)

1. Pellicle – This is outermost, thin proteinaceous covering or sheath of chromosome.

2. Matrix – This is a liquid nongenetic achromatic ground substance of chromosome, which has different type of enzymes, minerals, water, proteins.

3. Chromonema (singular Chromonemata) →Term by Vejdovsky. This is an important, genetical, highly coiled thread, throughout the length of a chromosome or chromatid. It was called chromonema. Types of coiling in chromonema –

(i) Plectonemic-coiling :- When both the chromonema are inter twined and can not be seperated easily. (in mitotic prophase chromosomes)

(ii) Paranemic coiling :- When both chromonema can be easily seperable. (In meiotic prophase) 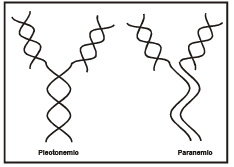 Both sister chromatids or longitudinal half chromosome are joined together by a common centromere. A chromosome, may have single chromatid (in Anaphase or Telophase) or two chromatid. (as in metaphase)

7. Satellite : part of chromosome remains after the NOR is known as chromosomes satellite/ Trabent.

8. Telomere : Chromosomes have polarity and polar ends of chromosomes is known as Telomere.

TYPES OF CHROMOSOMES ON THE BASIS OF POSITION OF CENTROMERE

(i) Telocentric :- When centromere is terminal or located at the tip of chromosome.

(ii) Acrocentric :- When the centromere is sub-terminal or located near the tip.

(iii) Metacentric :- When the centromere is located at mid of the chromosome.

(iv) Sub metacentric :- When the centromere located near centre or mid point of chromosome.

TYPES OF CHROMOSOMES ON THE BASIS OF NUMBER OF CENTROMERE

(i) Acentric :- Chromosome without centromere.

(ii) Monocentric :- Chromosome with one centromere.

(iii) Dicentric :- When the number of centromere is two.

(iv) Polycentric chromosome :- When the number of centromere is more than two & diffused in throughout chromosome length.

Nucleosome model :- Bead like structure in chromatin was first observed by Olin's etal. This model was proposed by Kornberg & Thomas in 1974, which is most important and universally accepted model for the structure of chromosome. This model explain that how giant DNA molecule & histone (Chromatin) packaged in to a chromosome. Term nucleosome was given by P.Oudet in 1975. "Nucleosome is a unit of chromatin (chromosome) which is composed of about 200 base pairs of the

1. Salivary gland chromosome :- This type of  chromosome was discovered by E.G. Balbiani,  in Chironomous larva of Drosophila . Size of this chromosome may upto 2000 micron (2mm) and number of chromatids may be 512 to many thousands. Thus, this type of chromosome also known as Giant chromosome.

Size of these chromosomes may upto 5900 micron, and also called as giant chromosome.

Group (A) : 1–3 chromosomes of largest size and submetacentric or metacentric centromere.

Group (D) : 13–15 chromosomes, shorter than group ‘C’ with centromere near the end (Acrocentric). They are SAT chromosomes or satellite.