The cell is the basic structural and functional unit of any living being. It is the fundamental building block, which when combined with similar cells forms a tissue and organs. A cell comprises several organelles:

The cell undergoes a series of events that result in the duplication of cell along with the DNA. This is known as the cell cycle. Let us have a look at the events taking place in the division of cell during a cell cycle.

“Cell cycle refers to the series of events that take place in a cell, resulting in the duplication of DNA and division of cytoplasm and organelles to produce two daughter cells.” 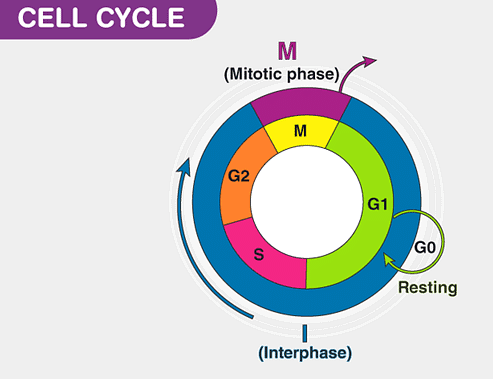 What is Cell Cycle?The cell cycle was discovered by Prevost and Dumas (1824) while studying the cleavage of zygote of Frog. It is a series of stages a cell passes through, to divide and produce new cells.This entire process where with the help of one single parent cell a new cell population grows and develops is known as the cell cycle.

Phases of Cell CycleCell cycle or cell division refers to the series of events that take place in a cell leading to its maturity and subsequent division. These events include duplication of its genome and synthesis of the cell organelles followed by division of the cytoplasm.Human cells exhibit typical eukaryotic cell cycle and take around 24 hours to complete one cycle of growth and division. The duration of the cycle, however, varies from organism to organism and cell to cell.A typical eukaryotic cell cycle is divided into two main phases:1. InterphaseAlso known as the resting phase of the cell cycle; interphase is the time during which the cell prepares for division by undergoing both cell growth and DNA replication. It occupies around 95% time of the overall cycle.The interphase is divided into three phases:

Some cells like cardiac cells in the adult animals do not exhibit division and some others only divide to replace those cells which have been either damaged or lost due to cell death. Such cells which do not divide further attain an inactive G0 phase also known as quiescent phase after they exit the G1 phase. These cells remain metabolically active but do not divide unless called upon to do so.2. M phaseThis is the mitotic phase or the phase of the equational division as the cell undergoes a complete reorganization to give birth to a progeny that has the same number of chromosomes as the parent cell. The other organelles are also divided equally by the process of cytokinesis which is preceded by mitotic nuclear division.The mitotic phase is divided into four overlapping stages: 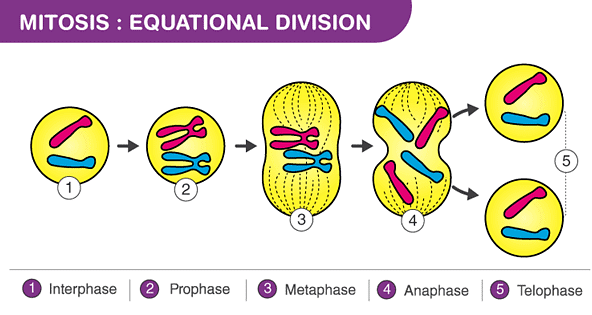 The process by which a eukaryotic cell separates the nuclear DNA and chromosomes and divides into two different but similar sets of nuclei is known as mitosis. The chromosomes are pulled apart by a mitotic spindle, which is a specialized structure consisting of microtubules.

CytokinesisIn this phase, the cytoplasm of the cell divides. It begins as soon as the mitosis ends. Plant cells are much tougher than animal cells, as they have a rigid cell wall and high internal pressure. Thus, cytokinesis occurs in plant and animal cells differently.