Models are necessary to simulate the real world scenario to some extent, or in some cases, they can even provide the exact scenario. Characteristics of traffic changes with time, place, human behavior etc. The models in traffic engineering are necessary to predict the behavior of traffic in proper planning and design of the road network. The models can be microscopic and macroscopic. In the present chapter, a macroscopic model has been discussed known as cell transmission model which tries to simulate the traffic behavior.

In the classical methods to explain macroscopic behaviour of traffic, like hydrodynamic theory, differential equations need to be solved to predict traffic evolution. However in situations of sudden high density variations, like bottle-necking, the hydrodynamic model calls for a shock wave (an ad-hoc). Hence these equations are essentially piecewise continuous which are difficult to solve. Cell transmission models are developed as a discrete analogue of these differential equations in the form of difference equations which are easy to solve and also take care of high density changes.

In this lecture note the hydrodynamic model and cell transmission model and their equivalence is discussed. The cell transmission model is explained in two parts, first with only a source and a sink, and then it is extended to a network. In the first part, the concepts of basic flow advancement equations of CTM and a generalized form of CTM are presented. In addition, the phenomenon of instability is also discussed. In the second segment, the network representation and topologies are established, after which the model is discussed in terms of a linear program formulation for merging and diverging.Single source and sink CTM model

The cell transmission model simulates traffic conditions by proposing to simulate the system with a time-scan strategy where current conditions are updated with every tick of a clock. The road section under consideration is divided into homogeneous sections called cells, numbered from i = 1 to I. The lengths of the sections are set equal to the distances travelled in light traffic by a typical vehicle in one clock tick. Under light traffic condition, all the vehicles in a cell can be assumed to advance to the next with each clock tick. i.e,

where, ni(t) is the number of vehicles in cell i at time t. However, equation 18.1 is not reasonable when flow exceeds the capacity. Hence a more robust set of flow advancement equations are presented in a later section.Flow Advancement Equations

First, two constants associated with each cell are defined, they are: (i) Ni(t) which is the maximum number of vehicles that can be present in cell i at time t, it is the product of the cell’s length and its jam density. (ii) Qi(t) : is the maximum number of vehicles that can flow into cell i when the clock advances from t to t + 1 (time interval t), it is the minimum of the capacity of cells from i − 1 and i. It is called the capacity of cell i. It represents the maximum flow that can be transferred from i − 1 to i. We allow these constants to vary with time to be able to model transient traffic incidents. Now the flow advancement equation can be written as, the cell occupancy at time t + 1 equals its occupancy at time t, plus the inflow and minus the outflow; i.e.,

where, ni−1(t): is the number of vehicles in cell i − 1 at time t, Qi(t): is the capacity flow into i for time interval t, Ni(t) - ni(t): is the amount of empty space in cell i at time t.Boundary conditions

Boundary conditions are specified by means of input and output cells. The output cell, a sink for all exiting traffic, should have infinite size (NI+1 = ∞) and a suitable, possibly time-varying, capacity. Input flows can be modeled by a cell pair. A source cell numbered 00 with an infinite number of vehicles (n00(O) = ∞) that discharges into an empty gate cell 00 of infinite size, N0(t) = ∞. The inflow capacity Q0(t) of the gate cell is set equal to the desired link input flow for time interval t + 1.Equivalence with Hydrodynamic theory

Consider equations 18.2 & 18.3, they are discrete approximations to the hydrodynamic model with a density- flow (k-q) relationship in the shape of an isoscaled trapezoid, as in Fig.18:2. This relationship can be expressed as:

Flow conservation is given by

To demonstrate the equivalence of the discrete and continuous approaches, the clock tick set to be equal to ∂t and choose the unit of distance such that v∂t = 1. Then the cell length is 1, v is also 1, and the following equivalences hold: x ≡ i, kj ≡ N, qmax ≡ Q, and k(x, t) ≡ ni(t) with these conventions, it can be easily seen that the equations 18.4 & 18.3 are equivalent. Equation 18.6 can be equivalently written as:

This represents change in flow over space equal to change in occupancy over time. Rearranging terms of equation 18.7 we can arrive at equation 18.3, which is the same as the basic flow advancement equation of the cell transmission model. Generalized CTM Generalized CTM is an extension of the cell transmission model that would approximate the hydrodynamic model for an equation of state that allows backward waves with speed w ≤ v (see Fig. 18:3 ). This is a realistic model, since on many occasions speed of backward wave will not be same as the free flow speed.

Consider a 1.25 km homogeneous road with speed v = 50 kmph, jam density kj = 180 veh/km and qmax = 3000 veh/hr. Initially traffic is flowing undisturbed at 80% of capacity: q = 2400 veh/hr. Then, a partial lane blockage lasting 2 min occurs on 1/3 rd of the distance from the end of the road. The blockage effectively restricts flow to 20% of the maximum. Clearly, a queue is going to build and dissipate behind the restriction. After 2 minutes, the flow in cell 3 is maximum possible flow. Predict the evolution of the traffic. Take one clock tick as 30 seconds.

Step 2: Determination of constants (N & Q) N = maximum number of vehicles that can be at time t in cell i, = cell length x jam density, = 180 x (5/12) = 75 vehicles, Q =maximum number of vehicles that can flow into cell I from time t to t+1, = 3000 x (1/120) = 25 vehicles. Now, to simulate the traffic conditions for some time interval, our main aim is to find the occupancies of the 3 cells (as calculated above) with the progression of clock tick. This is easily showed by creating a table. First of all, the initial values in the tables are filled up.

Step 4: Initialization of the table The table has been prepared with source cell as a large capacity value and a gate is there which connects and regulates the flow of vehicles from source to cell 1 as per the capacity of the cell for a particular interval. The cell constants (Q and N) for the 3 cells are shown in the table. Note that the sink can accommodate maximum number of vehicles whichever the cell 3 generates. Q3 is the capacity in terms of number of vehicles of cell 3 . The value from H5 to H7 (i.e 5) corresponds to the 2min time interval with 4 clock ticks when the lane was blocked so the capacity reduced to 20% of the maximum (i.e. 600 × (1/120) vehicles). After the 2 min time interval is passed vehicles flows with full capacity in cell 3. So the value is 25 (i.e 3000 × (1/120) vehicles).

Step 5: Computation of Occupancies Simulation need not be started in any specific 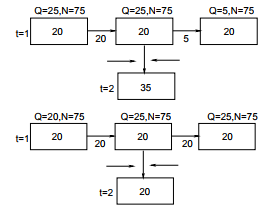 Numerical exampleConsider a 1.25 km homogeneous road with speed v = 50 kmph, jam density kj = 180 veh/km and qmax = 3000 veh/hr. Initially traffic is flowing undisturbed at 80% of capacity: q = 2400 VPH. Then, a partial lane blockage lasting 2 min occurs l/3 of the distance from the end of the road. The blockage effectively restricts flow to 20% of the maximum. Clearly, a queue is going to build and dissipate behind the restriction. Predict the evolution of the traffic. Take one clock tick as 6 seconds.

Solution This problem is same as the earlier problem, only change being the clock tick. This problem has been solved in Excel. The simulation is done for this smaller clock tick; the results are shown in Fig. 18:3 One can clearly observe the pattern in which the cells are getting updated. After the decrease in capacity on last one-third segment queuing is slowly building up and the backward wave can be appreciated through the first arrow. The second arrow shows the dissipation of queue and one can see that queue builds up at a faster than it dissipates. This simple illustration shows how CTM mimics the traffic conditions.

Network topologiesThe notations introduced in previous section are applied to different types of cells, as shown in Figures 18:4, 18:5 & 18:6. Some valid and invalid representations in a network are shown in Fig 18:10 & Fig 18:9. yk(t) = min(nBk(t), min[QBk(t), QEk(t)], δEk[NEk(t) − nEk(t)]) (18.9) where, δ = w/v. yk(t) is the inflow to cell Ek in the time interval (t,t + 1). Defining the maximum flows that can be sent and received by the cell i in the interval between t to t + 1 as SI (t) = min(QI, nI), and RI (t) = min(QI , δI , [NI − nI ]). Therefore, yk(t) can be written in a more compact form as: yk(t) = min(SBk, REk). This means that the flow on link k should be the maximum that can be sent by its upstream cell unless prevented to do so by its end cell. If blocked in this manner, the flow is the maximum allowed by the end cell. From equations one can see that a simplification is done by splitting yk(t) in to SBk and REk terms. ’S’ represents sending capacity and ’R’ represents receiving capacity. During time periods when SBk< REkthe flow on link k is dictated by upstream traffic conditions-as would be predicted from the forward moving characteristics of the Hydrodynamic model. Conversely, when SBk > REk, flow is dictated by downstream conditions and backward moving characteristics.

Consider two cells merging, here we have a beginning cell and its complimentary merging into ending cell, the constraints on the flow that can be sent and received are given by equation 18.10 and equation 18.10. where, SI (t) = (QI , nI ), and RI (t) = (QI , δI, [NI − nI ]). A number of combinations of yk(t) + yck(t) are possible satisfying the above said constraints. Similarly for diverging a number of possible outflows to different links is possible satisfying corresponding constraints, hence this calls for an optimization problem. Ziliaskopoulos (2000), has given this LP formulations for both merging and diverging, this has been discussed later

• NETCELL is a freeway network simulation program based on the cell transmission model developed by Cay ford, Lin and Daganzo.

• It consists of two components,

• NETCELL is a macroscopic simulation program in which vehicle quantities are treated as continuous variables. Vehicles are advanced in a way consistent with the hydrodynamic theory of traffic flow.