The period around 200 BCE did not witness an empire as large as Mauryas but is regarded as an important period in terms of the intimate and widespread contacts between Central Asia and India.

At the beginning of the 2nd century BCE, the Indo-Greeks/Bactrian Greeks were the first to invade India. The Indo-Greeks occupied a large part of north-western India, much larger than that conquered by Alexander. Try yourself:Who was the most celebrated Indo-Greek ruler who stabilized Indo-Greek power and also extended his empire’s frontiers in India.

Menander, also spelled Minedra or Menadra, Pali Milinda was the greatest of the Indo-Greek kings and the one best known to Western and Indian classical authors. 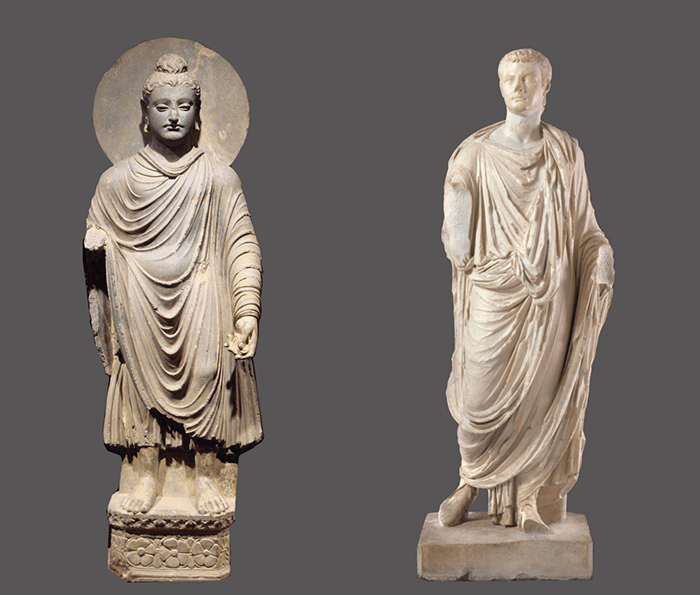 Gandhara Buddha: Comparison of a Buddha from Gandhara with a Roman sculpture

Shakas is the Indian term for the people called the Scythians, who originally belonged to Central Asia.

In the mid 1st century CE, the Shakas’ domination in northwest India was followed by that of the Parthians. 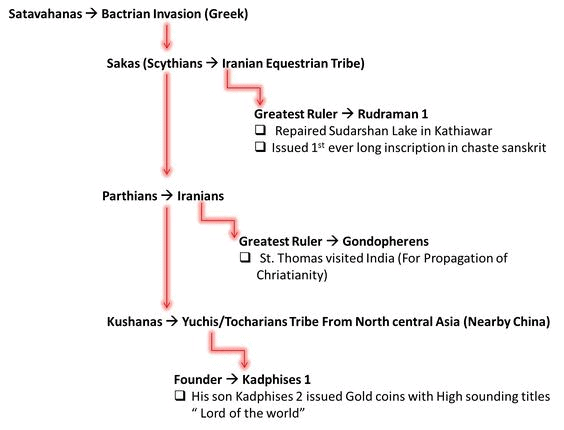 The Parthians were followed by the Kushanas who were also called Yue-Chis (moon tribe) or Tocharians. The Kushana dynasty was founded by a house of chiefs called Kadphises.Kujula Kadphises 1 (15 CE – 64 CE) Kushana power gradually declined from the early third century CE. The Kushana empire in Afghanistan and in the area west of the Indus was supplanted by the Sassanian power (of Iran) in the mid-third century CE. But Kushan principalities continued to exist in India for about a century. Some remnants of the Kushanas lingered on in the Kabul valley, Kapisa, Bactria, Khorezm, and Sogdian (identical with Bukhara and Samarkand) in the third-fourth century CE.

Try yourself:They were nomadic tribal people who were originally from the steppes of North Central Asia, in the neighbourhood of China. Select the correct option
Explanation

The Kushanas have their roots in a series of migrations of the Yuezhi people, who in turn can be traced to an ancient tribe that settled in the modern-day Xinjiang region of China

The Central Asian influence was felt in almost all spheres and aspects of social life. The Shaka-Kushana phase introduced new elements to trade and agriculture, art and literature, pottery, science and technology, etc.

The detailed impact of Central Asian Contacts on Trade, Architecture, Society are as follows:

The construction of stupas and the development of regional schools of sculpture are the two main features concerning the art and architecture of this period. 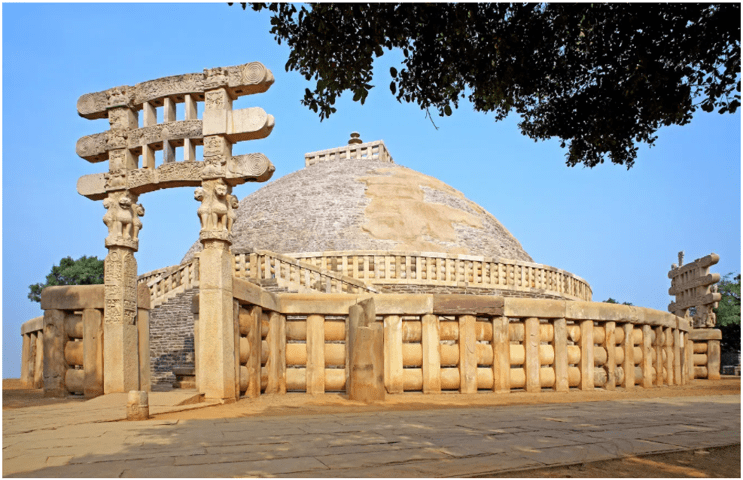 The Great Stupa at Sanchi Try yourself:Which of the following is true about Amaravati School of Art?
Explanation

The Amaravati School of Art flourished in the region of Andhra Pradesh between the lower valleys of rivers Krishna and Godavari. An important characteristic of the Amaravati school is the 'narrative art'. The satavahanas were the main patrons of this form of art. The medallions were carved in such a manner that they depict an incident in a natural way.