Centrifugal Energy and the Effective Potential

In equations (6.23) to (6.26) for dr, dt , and θ , respectively, appeared a common term containing different energies (i.e., the total, potential, and rotational energies)

The last term is the energy of rotation since

It is interesting to note that if we arbitrarily define this quantity as a type of “potential energy” U c , we can derive a conservative force from it. That is, if we set

then the force associated with it is

If we take for example the case of an inverse-square-law (e.g., gravity or electrostatic), we have

The effective potential is

It is also possible to guess some characteristics of potential orbits simply by comparing the total energy with the effective potential energy at different values of r . From Figure 6-3 we can see that the motion of the particle is unbounded if the total energy ( E1 ) is greater than the effective potential energy for r ≥ r1 when E1 = V ( r1 ) . This is because the positions for which r < r1 are not allowed since the value under the square root in equation (6.41) becomes negative, which from equation (6.23) would imply an imaginary velocity. For the same reason, the orbit will be bounded with r2 ≤ r ≤ r4 for a total energy E2 , where V ( r2 ) ≤ E2 ≤ V ( r4 ) . The turning points r2 and r4 are called the apsidal distances. Finally, the orbit is circular with r = r3 when the total energy E3 is such that E3 = V ( r3 ) . Figure 6-2 - Curves for the centrifugal, effective, and gravitational potential energies. Figure 6-3 – Depending on the total energy, different orbits are found.

The equation for a planetary orbit can be calculated from equation (6.26) when the functional form for the gravitational potential is substituted for U ( r )

This equation can be integrated if we first make the change of variable u = 1 r , the integral then becomes

Now, to find the solution to the integral of equation (6.51), let’s consider a function f (u )

Taking a derivative relative to u we get

Returning to equation (6.51), and identifying f (u ) with the following

Equation (6.59) is that of a conic section with one focus at the origin. The quantities ε and 2" are called the eccentricity and the latus rectum of the orbit, respectively. The minimum value of r (when θ = 0 ) is called the pericenter, and the maximum value for the radius is the apocenter. The turning points are apsides. The corresponding terms for motion about the sun are perihelion and aphelion, and for motion about the earth, perigee and apogee.

As was stated when discussing the results shown in Figure 6-3, the energy of the orbit will determine its shape. For example, we found that the radius of the orbit is constant when E = Vmin . We see from, equation (6.60) that this also implies that the eccentricity is zero (i.e., ε = 0 ). In fact, the value of the eccentricity is used to classify the orbits according to different conic sections (see Figure 6-4):

For planetary motion, we can determine the length of the major and minor axes (designated by 2a and 2b ) using equations (6.59) and (6.60). For the major axis we have

For the minor axis, we start by defining

as the radius and angle where

which can be written 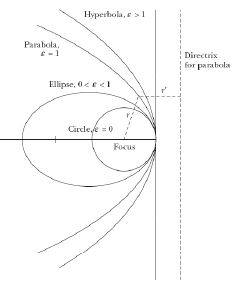 Figure 6-4 – The shape of orbits as a function of the eccentricity.

The period of the orbit can be evaluated using equation (6.20) for the areal velocity

Since the entire area enclosed by the ellipse will be swept during the duration of a period ζ , we have

. We find that the square of the period is proportional to the semi-major axis to the third, with the same proportionality constant for every planet. This (approximate) result is known as Kepler’s Third Law. We end by summarizing Kepler’s Laws

I. Planets move in elliptical orbits about the Sun with the Sun at one focus.II. The area per unit time swept out by a radius vector from the Sun to a planet is constant.III. The square of a planet’s period is proportional to the cube of the major axis of the planet’s orbit.