To find another number we will follow the same process again. 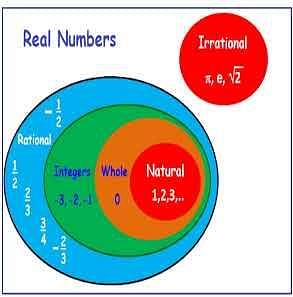 Real Numbers and their Decimal Expansions
1. Rational Numbers
If the rational number is in the form of a/b then by dividing a by b we can get two situations.
a. If the remainder becomes zero
While dividing if we get zero as the remainder after some steps then the decimal expansion of such number is called terminating.
Example:
7/8 = 0.875
b. If the remainder does not become zero
While dividing if the decimal expansion continues and not becomes zero then it is called non-terminating or repeating expansion.
Example:
1/3 = 0.3333….

Hence, the decimal expansion of rational numbers could be terminating or non-terminating recurring and vice-versa.
2. Irrational Numbers
If we do the decimal expansion of an irrational number then it would be non –terminating non-recurring and vice-versa. i. e. the remainder does not become zero and also not repeated.
Example:
π = 3.141592653589793238……
Representing Real Numbers on the Number Line
To represent the real numbers on the number line we use the process of successive magnification in which we visualize the numbers through a magnifying glass on the number line.
Example: 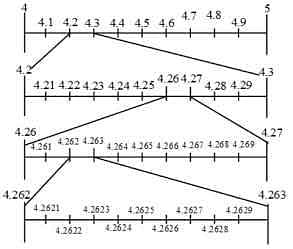 Operations on Real Numbers
1. The sum, difference, product and quotient of two rational numbers will be rational.
Example:

Finding Roots of a Positive Real Number ‘x’ geometrically and mark it on the Number Line
To find √x geometrically
1. First of all, mark the distance x unit from point A on the line so that AB = x unit.
2. From B mark a point C with the distance of 1 unit, so that BC = 1 unit.
3. Take the midpoint of AC and mark it as O. Then take OC as the radius and draw a semicircle.
4. From the point B draw a perpendicular BD which intersects the semicircle at point D. 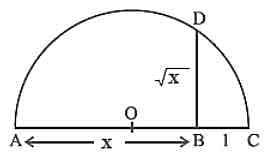 Now E is √x on the number line.
Identities Related to Square Roots
If p and q are two positive real numbers 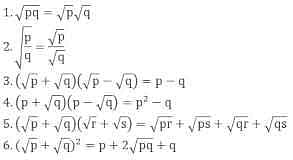 We will use the identity

We will use the identity